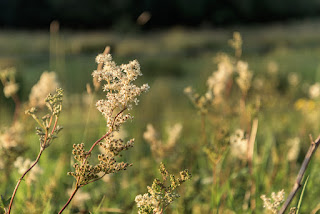 When the weather warmed up again after my first session  I was keen to have another try for eels. Planning ahead I got myself some squid as I have more confidence in that as a bait for eels than bits of smelt.

I checked my worms on the Saturday and they were fine. When I went to get my gear ready the following evening they were a mess of slimy corpses. Bugger.

Naturally the weather turned cold and miserable again on the Monday.

Not to be beaten I waited until things picked up and bought a smaller tub of worms on the basis that if they all croaked it would not be such a big loss. Last week I picked a warm day to take them out. The lake was in glorious high summer fettle as I walked round it to choose a swim. The lillies are up and in flower, the banks thick with wild flowers, great swathes of foaming meadowsweet all around. I was spoiled for choice but decided to settle myself in a corner swim with a couple of eely features to cast to. 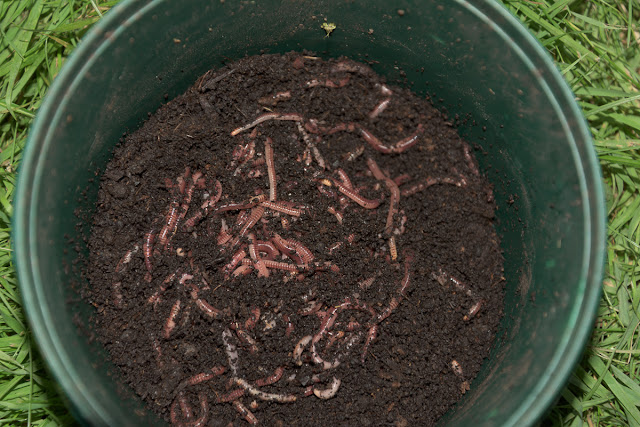 When I returned with my tackle it looked like I had chosen a roosting place for a bunch of young mallards. They seemed intent on hiding under the willows to my right, but were wary of my presence. They spent most of what remained of daylight alternately swimming towards me and away again. I don't think they were expecting to be fed, they just wanted to go to bed! 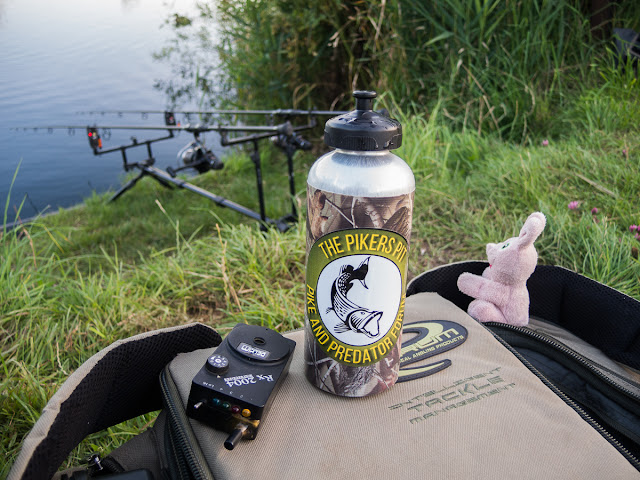 My set ups were pretty much the usual. One rod with the off-bottom rig to fish worms - I had to lengthen the lead link for this, and a simple leger for the squid section. One was cast close to the mallards' bedroom the other to some nearby pads on my left. Nothing much happened. In fact nothing happened.

As the light fell the rigs were swapped over, and eventually the squid cast out towards a shallow bar. There was a clear and starry sky accompanied by a dramatic temperature drop. even so there was silage making going on in the field at my back until well after dark which is starting to come earlier now.

The alarms remained quiet even as the light grew faint. Shortly before ten I started to get takes to the squid at prolonged intervals. After a half hearted take to the squid at eleven twenty a more confident run came on the recast. I struck and felt a fish. Then I didn't feel it. This was strange as I usually miss eel takes completely or hook them well. What was just as perpexing was the complete lack of interest in the worms. I stuck at it until quarter past midnight as the cool night wasn't encouraging me any more than the light mist rolling across the lake. That bottle of cold water I'd brought for refreshment wasn't too enticing either and I fancied a brew.

Naturally enough the up and down weather that followed did nothing to make me want to shelter from rain or shiver by the water side. When the forecast suggested an upturn was on the way I made my plans. Thursday night would be eel night. After a slightly delayed start I was checking out swims by eight fifteen. The air was still, the sky cloudy but bright, and the air was warm. I expected it would stay warm after dark. But was the moon, already in the sky, too near to full for eeling? I don't set much store by moon phases for other species, but eels aren't like other fish. I'm sure I've heard that their migrations are governed by the moon, so it strikes me as reasonable other aspects of their behaviour could be. 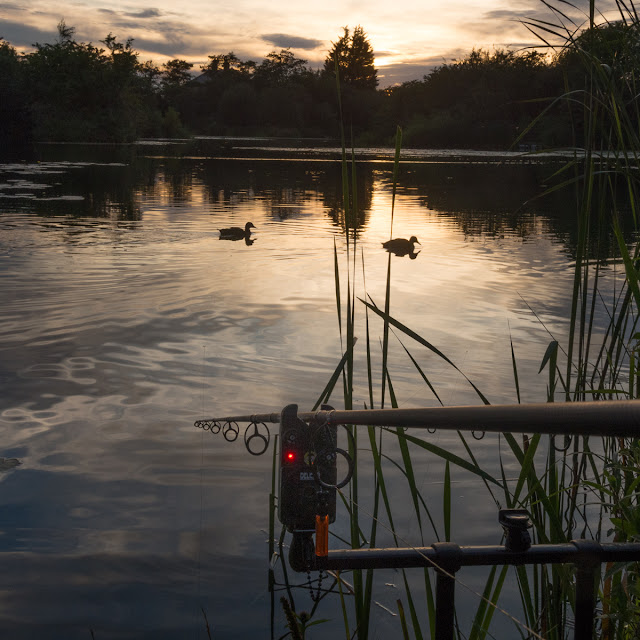 After discounting a swim I really fancy because it looks a bit awkward to fish - I'd have to sit above the rods, and I prefer to sit next to them when eeling - I plumped for a swim near the car which I don't remember fishing for eels before.

Once more it was a swim full of immature mallards. These, however, thought I was a source of food and kept approaching me. When I threw stones in to make a splash I hoped might scare them off they chased after them. It was futile!

I didn't change my tactics. the rigs were the same and one was cast to the left by some pads, the other to the right by some pads. It might be a boring approach but the rigs work, and the locations were as good as anywhere. When it comes to squid and eels I sometimes wonder if it matters where they are cast as eels appear to be attracted to them regardless.

It wasn't until the sun began to set that I had any indications. Initially they were all to the worms on the left hand rod. It was the old story of line being taken with a strike failing to connect. The worms bitten through.

While 'my' mallards were either reluctant or unable to fly, darkness saw two lots of mallards come in to land, wiffling their wings to slow them down for a scudding splashy landing. Thinking about it, other than a single moorhen, there wasn't much birdlife about. One warbler in the hawthorns and  a tawny owl hooting late on.

Action did come to the squid, another case of line peeling out and a strike into nothingness. I'd give circle hooks a try so I could leave takes to develop for longer without risking gut hooking if I thought they would. Somehow I can't see it. If they were taking the bait down I'd be deep hooking them instead of missing altogether. As with the worms I think the eels are avoiding the hooks. Either that or it's bootlaces to blame.

At eleven a run developed to the squid rod. No different to the others yet the strike met with resistance. Nothing spectacular but sufficient weight to make me reach for the landing net while keeping the line tight in case the eel dropped off.

Success! Worth getting the weigh sling out for to confirm my guesstimate of its weight but not as big as I'd initially hoped. The eel dropped a pound or more as it got closer in! 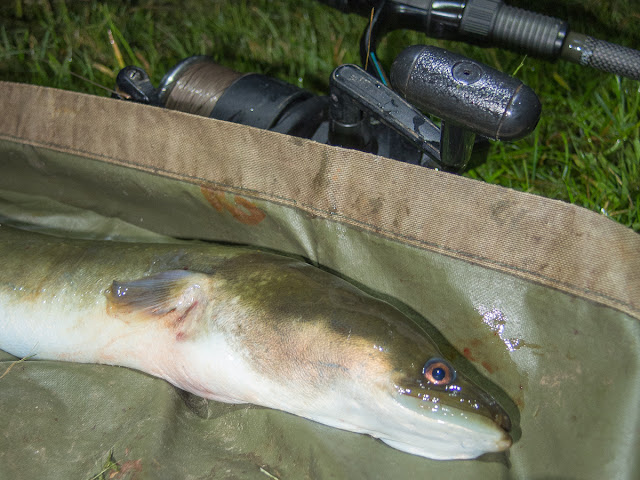 After sorting the slime out and rebaiting I was encouraged to linger longer. With just one more missed take by midnight prospects were fading. even so as it was still warm I hung around another half hour before the attraction of a mug of hot chocolate and a cosy bed became too much for this old git.
Posted by Dave Lumb at 11:48 am