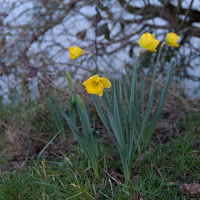 When I backed the car out after lunch today it went into gear. As well it might having had a new clutch fitted last week. The weather conditions were still confusing for February. The car's thermometer read 15 degrees and there were daffodils in bloom at the lake. I was so sure of the weather forecast I left my brolly and bunny suit at home. The bunny suit was a risk as I knew that as soon as the sun put its pyjamas on normal February temperatures would return. By then I'd be ready for off.

A brief walk to have a look around for other angers and I was on my way. I walked on past a swim I had in mind to give a try intending to fish it on my way back. I even walked further than I'd planned and settled into a cosy swim sheltered from the light southerly breeze by tall reeds. Two standby baits, a lamprey head and a bluey tail got cast to likely looking spots while a small smelt a firned had given me was dropped in the margin to my right. I'm not a fan of smelt but it allowed me to have three different baits in the water. 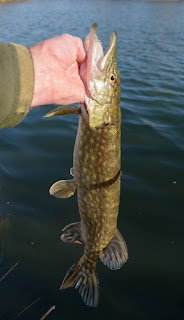 The smelt had only been soaking for ten minutes when the float slid away. I was stunned! On setting the hooks there was little resistance. When the hammer handle popped up it was obvious why. Rather than get the landing net wet I chinned the rascal out. Small as it was that jack meant I hadn't blanked this year. One with a fresh, and slightly larger, smelt and back to business.

I was allowing myself an hour in each of four swims, moving baits around every fifteen to thirty minutes in each swim. With this process duly completed I moved to a swim which always looks like it should be a good one for pike, but has yet to provide me with one. Today was no exception despite giving it a little longer than the hour.

Next stop would be the spot I'd walked past earlier on. With the sun lower and the water there in shade it felt less appealing. I have a bit of a thing about fishing sunlit water in winter and avoiding shaded areas. Quite possibly a daft thing, but it gives me confidence. I carried on to what was supposed to be the fourth swim of the day. I'd stick it out there until I'd had enough.

This area has produced for me in the past. The trouble with that is there's the temptation to put baits in the same places pike have been caught from on earlier occasions. In some ways this is sensible, in others it eliminates the chance of finding better spots. So it was smelt in the margin, bluey tail to the feature on my left (which has yet to produce for me) and lamprey head to what would be the edge of a lily pad bed if it was summer.

By now the wind was dropping and the lake calming off. Coots and moorhens were getting active, there having been little in the way of bird activity earlier despite the warmth. My fleece was definitely required and I was glad of the lined trousers as I watched the clear sky turn pale shades of pink and blue.

The lamprey float dipped, wobbled, then sank as the alarm sounded. With line running steadily off the baitrunner I wound straight down and connected with what felt like a better fish than the first one. There was weight to it but no fight until it came in close where it did some head shaking and rolling before it hit the back of the net. It was when the net was staked out that the pike came to life. 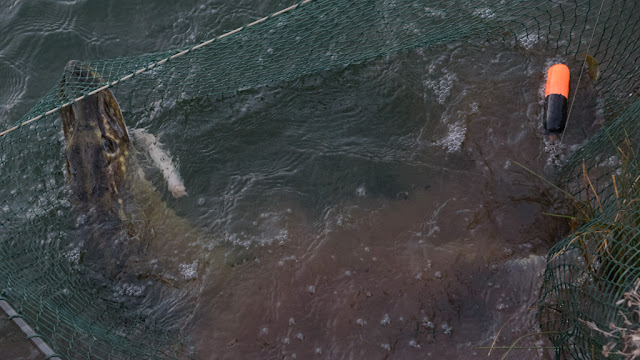 With the weigh sling soaked and wrung out and the mat laid on some level ground the fish continued to fight. The free treble found the net and, after I'd unhooked the other treble from the fish, one of my fingers. Once in the damp sling things calmed down. My guestimate as I'd lifted the fish in the net was proved accurate by the scales. A fish with a full belly by the look of it, but not bloated with spawn. That it was showing signs of previous captures took a little of the shine off events, but it was still good to catch and recaptures are part of fishing small (and large) waters. Better a slightly tatty fish than none at all.

I fished on until six leaving while there was still a good fifteen minutes of light left. Maybe if I had taken the bunny suit I'd have stopped longer. Somehow I doubt it. My mission had been accomplished.