These days I find fishing is more therapy than hobby. I seem to go fishing when I need to ease the tension. Yesterday my stress levels had been raised by some infuriating photo-scanning software which not only ran as slowly as usual (which I can live with) it also manage to store the scans in a different folder than it had last time I used it, and promptly lost them all when it decided to crash. Instead of smashing the scanner into tiny pieces with a lump hammer I grabbed a lure rod from the rack, found the box of lures I used last spring, and set off into a warm and sunny evening. 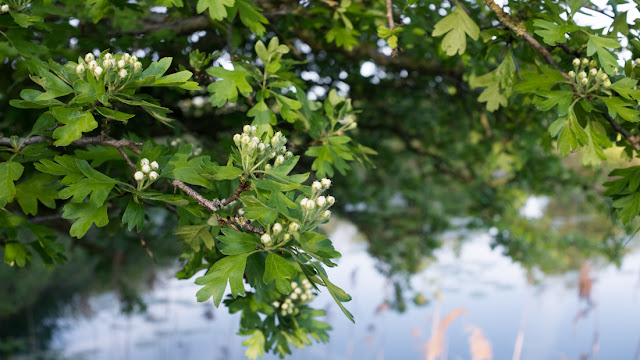 Although late, the hawthorn blossom is not as far behind as the blackthorn was. By the meteorological calendar it's almost summer, but according to the blossom it's mid-spring.

I started out casting a small black Darter given to me by Carl who is producing Loz Harrop Lures. It worked well, but the pike didn't like it any more than I did. I've never got on with tight action, subsurface, baits. Topwaters which walk like that are great, but deeper I prefer a lazier action. A wider glide, or a dive/rise. Pauses are easier to control.

Time to revert to type and chuck a squirrely Burt around. In the third swim it took one cast along the edge to entice a small pike into action. It either missed the lure or failed to get hooked. It was nothing to get upset about when it's second attempt failed on the follow-up cast either.

Two more swims were thrashed before I made another lure change. This time to a sleeper lure which would be in my top ten. The only in-line spinner that I have ever rated for big pike. Not that I've had any really big ones on it, only teenagers, but I know it has caught some lumps for other people. It's easy to cast, easy to fish, and it has its days.

In the seventh swim of the evening the sleeper elicited the same response Burt had done earlier. Two missed chances (whether mine or the fish's I'm not sure) from a similarly sized pike. Time to get the Jackpot out. Perhaps conditions weren't right, but surface action was non-existent. Back to Burty Boy.

I spent some time working the Burt around a promontory while a pair of Canada geese kept a wary eye on me from across the bay as four small balls of fluff with clockwork legs pecked the grass around them. Time was getting on and the air cooling. Back to the usual two swims near the car for the last fifteen minutes.

It only took three casts for the Burt to get hit just short of the rod top. As the pike, maybe a little shorter than the lure, thrashed around I decided against swinging it to hand for the unhooking and to let it shake itself free on a semi-slack line. The plan worked.

In the final swim of my two hour session the drop in temperature was noticeable by the water coming off the braid feeling decidedly chilly on my right hand. Definitely time for home.