This summer really hasn't managed to make its mind up. Which has meant the river going up and down like... You think of an analogy! A week ago it was up and rising as the rain continued to fall. If I wasn't out of touch with its moods and flows I'd have made a better job of things and not moved into a swim I should have started in as the water rose. I have no excuses for blanking. It was incompetence. 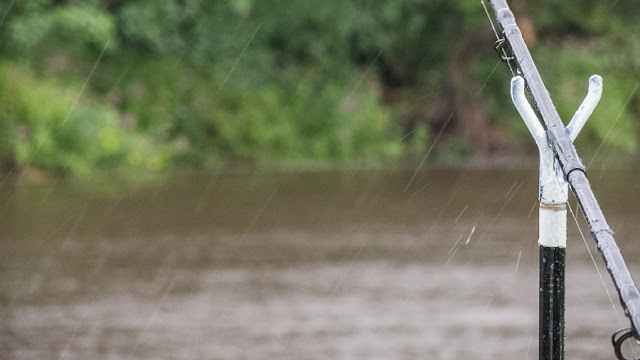 Yesterday evening saw me back fishing a river that was falling slowly having dropped and risen since my previous visit. This time my choice was improved. Although I seem to have forgotten some of the lessons I learned years back. Such as where the snags are in a certain swim. After losing a lead, and then a hook and lead when picking up the rod to deal with a take found everything solid, it came back to me that you don't cast upstream from this spot. That take was yet again to the rod fishing three 8mm crab pellets.I was beginning to wonder if the barbel have lost their taste for what used to be my favourite boilie which I was fishing on the other rod. I'd yet to have a take on them.

Fitting new isotopes to my rods at the start of the week had been worthwhile. Even before it was fully dark I could see them glowing brightly. I gave my rod rest heads another spray of white paint while I was at it. Much easier to locate in the dark now.

At ten thirty or so the same rod tip gave a series of short taps. At first I thought the fish was an eel as it felt to be wriggling. Then it felt like it had dropped off. Then it came back! Seeing it in the torchlight, along with a couple of bats flying around the line, I thought it was a small chub but as it slid to hand I realised it wasn't. Three 8mm pellets aren't what I'd set out to catch roach with. If it was a roach and not a roach/chub. I didn't bother weighing it, whatever it was. 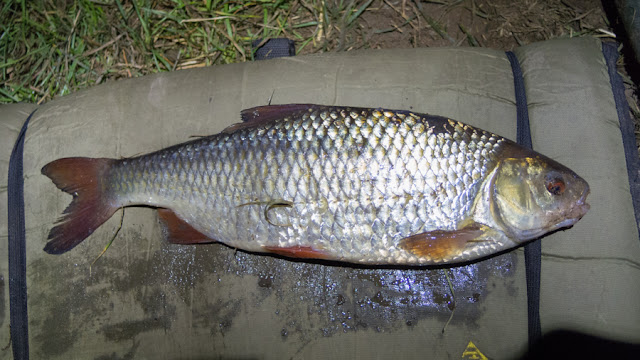 As I was slipping the fish back I heard the baitrunner on the downstream rod whirring slowly. The barbel do still like the boilies. Just as well as I have a full bag of them to use up. I am well out of practice at guessing how big barbel are. This one bulldogged and I was sure it was going to be my biggest of the season. It turned out to be the smallest. Just. 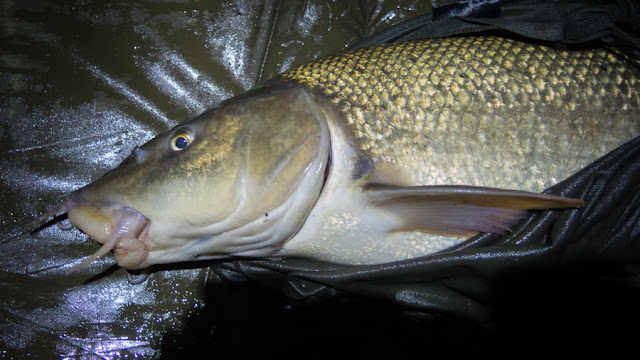 The moon began to rise casting an eerie light on the trees and cows behind me. Owls hooted. The placid swan paid me a visit. I think it likes company being the only trumpeter on the river. Firstly it dabbled in the margins under my rods, then it waddled up the bank and began to graze a little, but mostly just stand there. Nice to see it's still around. Unlike mute swans it's not a pesterer. 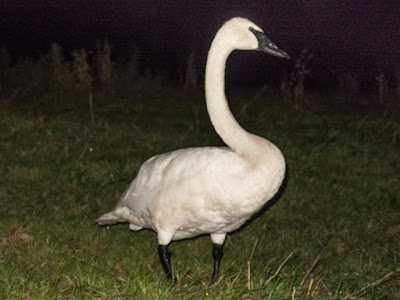 I had a few chub rattles to both rods, but that was my lot. Lead losses diminished as I got my casting bearings.There was a dew forming on my gear as I packed away at twelve fifteen and set off home. Not long after taking the turning out of the valley my headlights caught a lean fox jumping through a hedge and speeding across the road.