After my eel session I determined to get myself some worms before having another go. There were still a few deadbaits and some squid in the freezer but lobs would give me another option on the off-bottom rig. When the worms arrived, on the hottest day of the year so far and with the warmest night promised it seemed like too good an opportunity to miss. 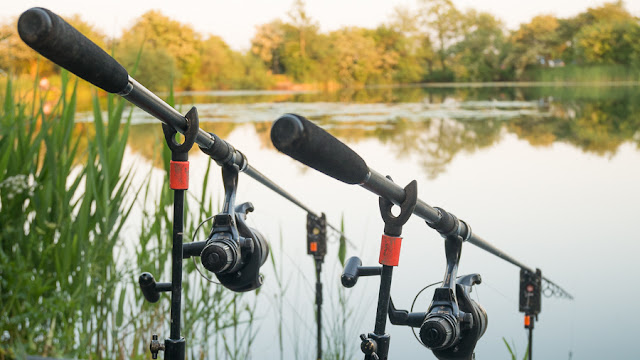 Even arriving after eight in the evening it was still red hot. There was hardly a breath of wind to ruffle the surface and even in the shade of the lowering sun it was t-shirt warm. I spent a good ten minutes drilling holes for my rear banksticks before casting out a head and a tail and then rigging up the worm rod. The rig was all set up and just needed a bomb to finish it off when I couldn't find a bomb. I was sure there were some in the rucksack, but no. For some reason the eel box had three back leads in it. I pulled the clip off one, tied a uni-knot in the end of the lead link and tightened it down on the backlead's stalk. I was in business!

Why you can't buy simple hooks like you used to remains a mystery to me. Drennan used to do a long shank hook which I liked for fishing worms, but long shanked hooks with simple O'Shaughnessy or round bends have all been replaced by 'carp' hooks. The closest to what I'd like that I've found so far are Varivas 'Semi Circle' hooks which I bought late last summer after my eeling was over. The eyes are a bit small, but wire or Kevlar braid will go through even on the size four. As I didn't seem to have any eel traces made up I've put these hooks on my dedbait traces too. The wire of the size fours is a bit finer than I'd like, but the 1/0s are spot on. I hope! 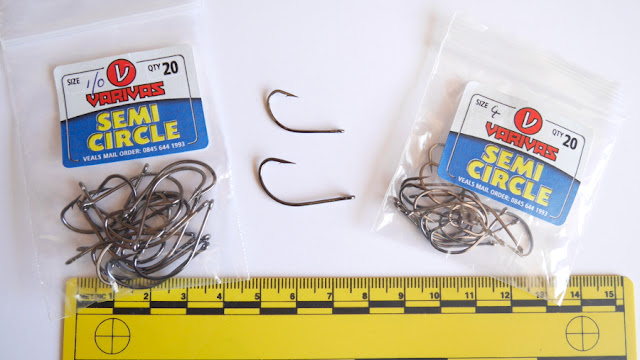 By eight thirty Fred and I were sat watching the rods and listening to the radio as the evening failed to cool down any. We weren't expecting any action until well after nine in any event. Sure enough it was almost ten, still t-shirt warm, when the head section fished to my left tore off. And so the madness began. I didn't keep a note of how many twitchy takes and dropped or missed runs I got. There were lots. As soon as the marginal off-bottom worms were discovered that bobbin was never still until the worms had gone. I ended up fishing just a single lob on that rig with the same result. Almost constant activity but nothing to connect with. 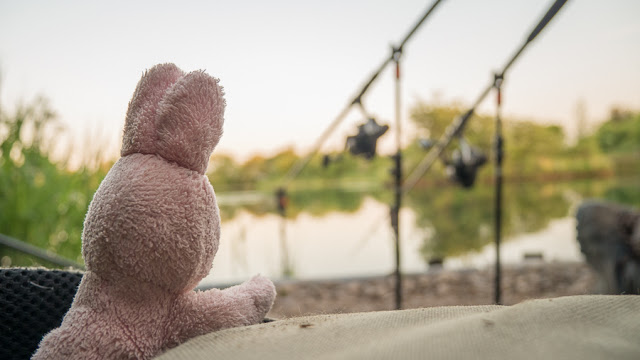 Takes to the deadbaits were more sporadic. The tail section cast well out disappeared from a single bleep. I replaced that with a lobworm and it was pounced on immediately. Every now and then the right hand alarm would signal a positive run. Some were missed, one was connected with until whatever was on the hook came off it a rod length out. Anyone who strikes at the slightest hint of a take this would have ended up in a strait-jacket! Being of a less intense nature I can eventually tune myself to respond only to positive runs.

The run that came to the head section rod at five to midnight was the sort that wasn't going to stop. At last I hooked one. Plainly not pulling back very hard, at least it was an eel. I left it in the landing net while I packed the other rods and everything else away. When I came to lift the net ashore the eel had done the decent thing and unhooked itself. 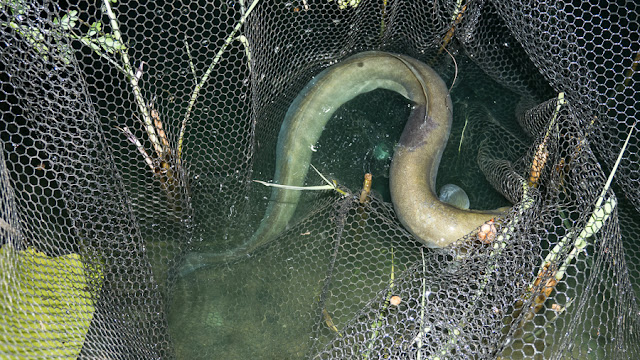 Back at the car the thermometer was reading 18 degrees. I removed the sweatshirt I'd put on an hour earlier and drove home with the window wound right down on a still and sultry night.