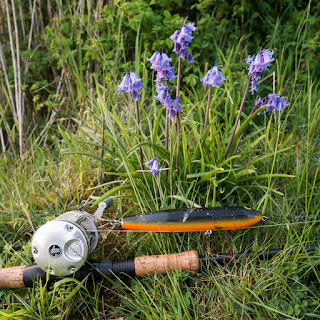 My lure fishing comeback tour continued yesterday. In the morning I'd visited the local DIY shop, which also sells household goods, with the intention of purchasing a tupperware type box to take over from the unstable bucket my lures have been rattling around in. I had one lined up but then noticed some storage boxes. Not air/watertight but that isn't a problem. The lidless bucket was hardly that. Best of all the box was large enough to get my unhooking tools in as well as the lures, and half the price of the tupperware type box!

Eager to try out the box I filled it with my junk, put it in the Korum mat/sling thing. And headed out into the warm spring evening. The sun was bright, the sky almost cloudless but there was a chilly north-easterly blowing.  Not ideal, but I do prefer a ripple on the water when I'm surface fishing. Particularly if I can cast downwind and work the lures back over the wavelets. I think the ripple makes a lures artificiality less obvious and it creates more noise from a bait. 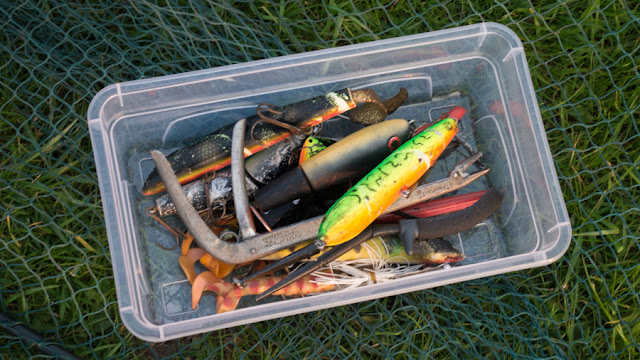 My plan was to work my way in the opposite direction to last time. No real reason except I fancied seeing if this time I could nail the fish I'd raised late on. No joy in the first swim so on to the next one. Here the water was in shade, but more rippled with the wind in my face. I cast over the places the takes came from on my previous visit with no success. Then I flicked the Blackpot out to my right. Nothing. Another cast a bit closer to the margin and two thirds of the way back there was a satisfying take. Not the splashy take of a small jack. Not the modest 'boom' of a high single. But a proper ka-boom! The resistance was more than the prototype rod had had to put up with before too.

Even so the fight was similar to all the others, except on a bigger scale. Wallowing and head shaking rather than runs. As I could see that the lure was outside the pike's mouth, just the tail hook connected, I feared the worst. A single point snout hook-up all to often leads to a shake of the head that sends the lure flying free. That was why I reached for the net rather than risk letting the fish tire before hand grabbing it. There had been no need to worry. The hook had taken hold well inside the top jaw, but was easily removed. 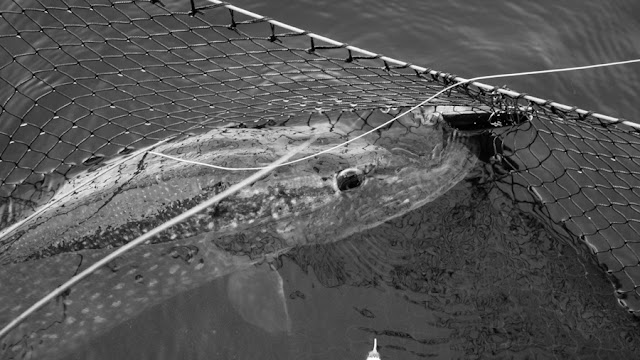 The scales I had with me were a little optimistic for pike fishing, reading up to 120lb. Being out of practice with my pike weight guesstimates I was amazed to see where the needle settled. A fair few degrees further round the dial than I'd expected.

A two pounder would have done to save a blank, but this fish meant I could have packed up there and then. I carried on though. Either I've scared all the jacks with the Jackpot, or they weren't up for it, because I didn't raise another fish for over an hour. In fact it was getting close to home time when a rooter in a swim I hadn't worked a lure through last time out went airborne with the bait between its teeth. the same old story, the first or second cast getting any interest there is. Then it was back to fishing what seemed like fishless water.

Despite a long lay off from surface fishing my little ruses are coming back to me. Making the lure walk around pads with hard taps followed by gentle ones so it doesn't come along a straight line. Dropping the lure short on a downwind cast and letting it drift up to the pads or reeds. Constantly shifting my position to alter the direction of the retrieve slightly to manoeuvre the lure. breaking up the metronomic taps with pauses. Sometimes these things work. Mostly they keep me thinking. Next time out, if I have the patience, I might start out with a surface crawler.
Posted by Dave Lumb at 7:30 am