Given my innate dislike of work when I have a lot of it to get done my motivation to go fishing tends to desert me for some reason. That's my current excuse for staying away from the water for most of this month. When I have had a spare couple of hours I've been spending them taking photographs for one of my projects.

In among the drudge work of standard builds there have been one or two custom jobs to keep me interested. I like playing around with colour combinations so when I was asked to whip up a set of rods using an olive thread and told to use my imagination for a choice of tipping colour to go above the handle I did just that. I wanted a contrast, but a subtle one. I think it worked out OK.

Football is something I don't understand, so it was a mystery to me why anyone would want a rod whipped up in a football team's colours. That they were green and white could have been a problem if I hadn't got myself a spool of white thread sometime last year on a whim. I'm sure I had a plan for it, but that can't have worked out! It is an option for colouring the tip on a barbel rod, but paint is easier. Putting marks on a marker rod is another use I've tried it for. Which it does well enough. Although I was sceptical of the green and white colour scheme it looks a lot better than I thought it might. 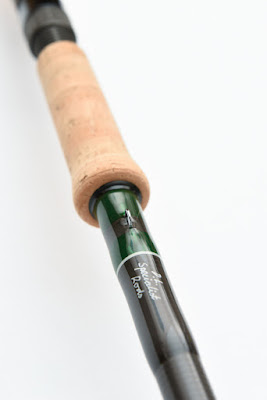 I've long been a sucker for stationery supplies. A weird fascination to have, but not an unusual one. There's something satisfying about pens and notebooks. Tapes fall into a similar category. I buy these sort of things and then try to find a use for them. After purchasing some black gaffer tape to wrap around a garish camera strap I discovered the stuff comes in a range of colours, including cammo and dayglo ones. I couldn't resist the temptation.

The cammo tape went on a bait bucket that didn't really need it, but it looks nice. Initially I had no use for the bright tapes. However, after using the white I had also bought to make labels for my boxes of stock and various other things I started using it to mark the sections of blanks when I'm building rods.

I'd used masking tape for this for years, writing details on it with marker pens. But despite it's removeability masking tape can leave a sticky residue which needs cleaning up. Gaffer tape, the proper stuff rather than duct tape, is pretty much residue free. And it tears easily. By using different colours on different sets of blanks I can quickly determine which sections are which. It looks kinda pretty too. I'm finding other labelling uses for dayglo tapes too. You can have hours of browsing fun at gaffertape.com if you are a tapeaholic! 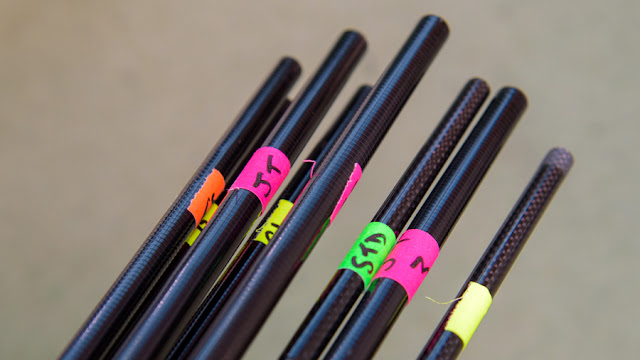 Every so often I have a customer who wants a rod building to match one or more they already have. In an ideal world I would build the new rod along side the existing one to make sure everything lines up the same. That's not always possible so I ask for measurements. The problem is that everyone seems to measure the placement of fittings in different ways. None of which ever coincides with my system!

The way I do things is to work from fixed points. On two-piece rods these are the tip and the butt. That way any slight variation in section length in the manufacturing process is eliminated. The joints of the old and new rods might not match up, but so long as the overall lengths are the same all the fittings will align.