Short sessions when not much happens aren't really worth writing about on their own. especially when there aren't even pretty sunsets to photograph. With the weather still staying dry of an evening, unlike earlier in the year when it seemed to be dry all day and start raining as soon as I felt like getting the tackle ready, I've squeezed in three short eel sessions this week, with mixed results.

The first session, on Tuesday, saw me have a move from the area which had been producing on teh grounds that the law of diminishing returns might start to apply. The swim I chose has lots going for it with overhanging trees and lily pads. It was a quiet evening with sunshine but hardly a ripple. To the right of the pads fry kept scattering as what I took to be perch attacked them. If one predatory species was feeding the eels might too. With darkness around eight fifteen I thought to myself that half an hour before that would bring me some action. No sooner had I thought it than it did. The deadbait by the pads was taken and an eel that didn't make two pounds, but was over a pound and a half, was soon returned. 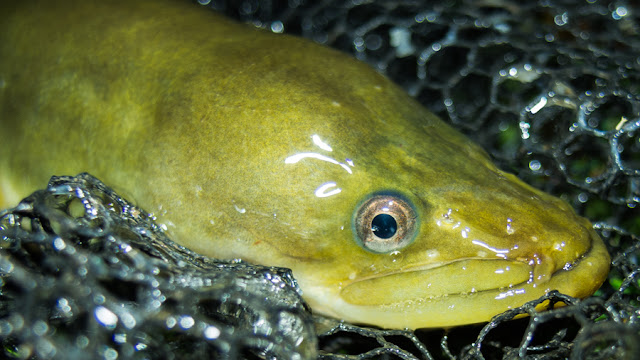 Since adding buoyancy to my lead links the swivels haven'[t been getting clogged with silkweed. I don't think this has affected the eels when they take the bait, but it saves me cleaning the stuff off my rigs. Two more takes, both inexplicably missed, to the replacement bait cast back to the pads and it was time to head for home.

Thinking that it was worth continuing with the eel fishing I considered doing an overnighter on Bleatmere on Thursday but settled for fishing until eleven. I tried to get there in good time so I could play around with some rig ideas, but that didn't pan out. Darkness is falling earlier and earlier each night now and I timed it wrong. The baits were out by six fifteen, though. It was settling down to be a pleasant night. Or it would have had the wind not been blowing in my face cooling me down. The eels weren't bothered though.

It was still broad daylight when the first run came to a roach tail fished at the foot of the marginal shelf. Then all went quiet for an hour when the suspended worm, which I was fishing close in over a lacing of dead maggots, was taken. The resulting eel was one of the smallest I've caught this year. With the light gone and the geese making so much noise I had to turn my radio off as I couldn't hear it, the frustration began. endless nibblings of worms producing nothing. Whereas on the other water this kind of frustration has been replaced by a lack of action Bleatmere still seems to hold lots of bootlaces and straps.

After two hours of up and down to rebait and recast the worm rod (you can't chance leaving a bait unchecked after a couple of bleeps on the alarm or you'll sit there with no bait on the hook for hours) another, even smaller, eel was landed. Although most of the takes were to the worm, often immediately after a recast or a top up of the maggots, I did have a couple of short, abortive runs to the roach and squid baits.

Friday and Saturday evenings saw me doing the last couple of hours thing again in an attempt to catch something bigger. I managed to avoid small eels, but this was by avoiding eels all together. The first session was another windy one where I chose a swim with no shelter. I'd gone armed with a fiendish plan. Not only did I have more dead maggots, but I had some pellets with me to fish in a mesh bag on one of the baits. The plan fell down when I opened up the PVA mesh bag loader to find there was no PVA mesh in it. I scattered loose pellets over the marginal bait instead. Other than a couple of chomped worms, action was there none. Maybe I shouldn't have fished the opposite end of the lake to the one I'd been catching from? Undeterred I was back the following evening, which was warmer but still windy. This time I made sure I was sheltered. It made no difference. Not a twitch was had.

A lot of the swims I fish these days have been 'improved' by packing with stone chippings. Fine if you sit on a seatbox/platform thing or use a rod pod, but I like to have some room between my rods and angle them down the line. This has lead to me snapping the tips off a couple of my solid point banksticks as I tried to wiggle them through the stones. One evening I was reduced to using my worm bucket as a back rest. This lead me to looking around at a way to make a simple rest that could be stood on the stones, or any other hard, flat surface, to prop the rod butt up. In most swims I can manage to get a front rest into the lake bed beyond the swim so only need to support the rod butt. I know it's fashionable to manage without a back rest in some circles, and I have been known to do it myself, but it's not always appropriate in my experience. 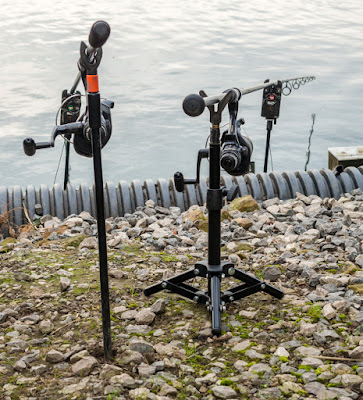 I looked at various tackle shop options, tried cobbling something together with bits of old bankstick and cable ties, then had a Eureka moment. I'd bought a table-top lighting stand for doing product photographs. All it needed was a rod rest head and it might do the job.

Good old gaffer tape to the rescue and I tried it out on Saturday. It did the job! I wouldn't recommend the stand for fishing locked up, with a gripping back rest, or with a tight baitrunner - it's not heavy and I could imagine it and/or the rod entering the lake! But for open bale or slack baitrunner use it'll be fine. At full extension it will also serve as a single front support. All I need to do now is modify the top to take a standard rod rest head thread and give it a proper trial. Less than nine quid, I bet they'd be nearer £20 if branded for carp fishing!

This bright idea might fail. The fittings might rust and the whole thing seize up or some other unexpected catastrophe occur. In which case I'll have to start taking three buckets with me...