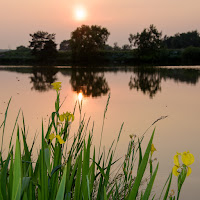 No matter how much fishing you do it always finds a way to prove you wrong. Recently I'd been thinking about my lack of roach on fake baits despite having caught them on other maggots and boilies from waters where I've used plastic for tench a great deal. Then, right out of the blue, I catch roach on imitation baits on two trips to a water. Half a dozen over a pound to fake corn and pellets! There's no rhyme or reason to it. If it hadn't been for the one on the pellet, fished with a small bag of real pellets on the hook, I might have put it down to a bed of hemp and corn. Although I've used that baiting approach for tench plenty of times. No. Fish are perplexing. Which is why we keep trying to catch them. 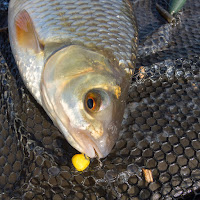 The first encounter with plastic eating roach also resulted in some plastic eating tench, and some that showed no fear of the scary boilies. It's all too easy to write a bait off as useless on the basis of a couple of blank sessions. I reckon most baits are acceptable to most fish most of the time. The main reason they don't catch is not having any fish find them. The next reason is them being presented in a way that is ineffective. Over a prolonged period some baits may appear to be more successful for certain species than others, but even then it might just be a coincidence.

Not only have I caught roach on plastic corn, I've also had a small rudd pick a grain up. The list of species I've caught on static fake baits keeps on growing. 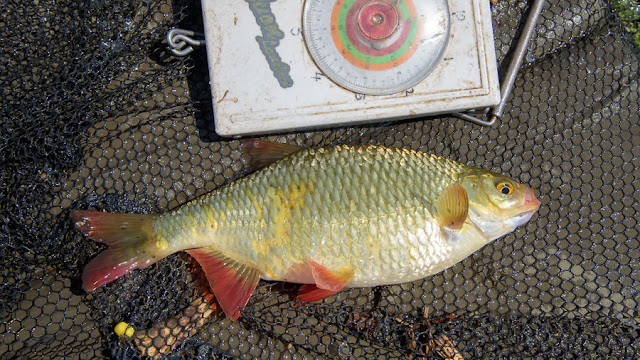 Catching roach on tench rods isn't a lot of fun when they're towing round two ounce leads. I'll have to have a go for them with the right gear later in the year. I'm not sure I'll be brave enough to go all out on the plastic baits for them, but I might chance it on one rod.

Using bits of foam as surface baits counts as using fake baits in my book. And the chance of some easy action from the suicidal Railway Pond fish is hard to resist when the weather is hot and I've an hour or three to spare. 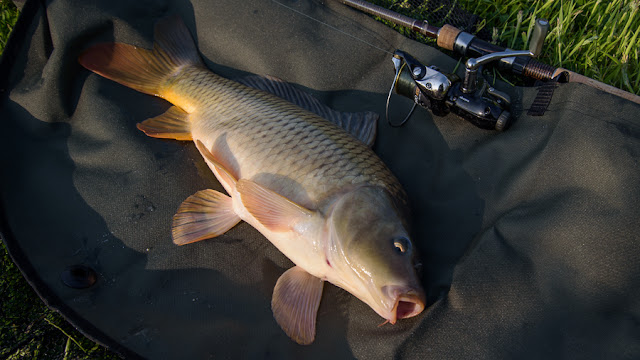 It seems that the bigger fish hang back from the ravening hordes of piranhas, picking off the mixers they miss. Not that I've landed anything big, big, but big is relative. One advantage of the foam is that the little pests mostly can't manage to get it in their gobs. Trying to avoid the tiny fish is the hardest thing at this place, and what keeps me going back I think.

Common blue damsels are, well, common. Four-spotted chasers and black-tailed skimmers fairly numerous. I've even seen a lone banded demoiselle. Watching these insects go about their business to the aural accompaniment of reed warblers on a sweltering afternoon is a certain sign that summer is in full swing. 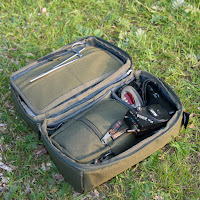 I'm gradually getting organised for my short sessions. I still try taking too much gear with me though, and am wondering if doing it the way I do for my winter piking might not be a better idea - sling, rucky, chair. Still, the little bits bag I bought holds my essentials with room for more. I even found a smaller pouch for my compact camera than the one I'd been using. It fits in the bits bag quite neatly, as does my notebook, headtorch, radio, sounder box, permits and sunglasses. It's a two-sided bag with a centre flap that Velcros to form a lid for one or other of the sides. Not perfect, but it'll do for now.

On yesterday's short session, the plastic pellet not only accounted for a roach, it was picked up by the mug tench, which has put on a bit of weight. These two fish managed to christen one of my ten foot Torrixes. Christened but not tested as neither of them did much in the way of pulling back. The tench felt like a bream all the way in until it was under the rod tip. The roach felt like a bit of weed on the hook. 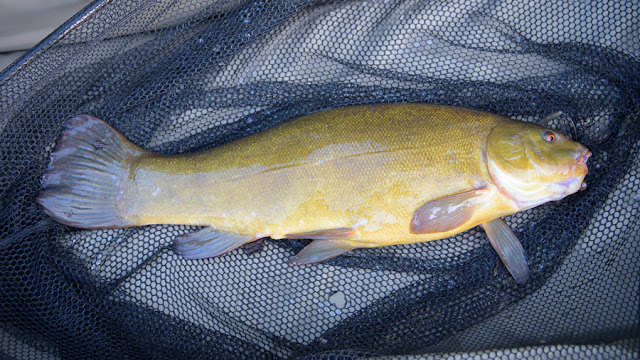