At the moment I'm having a lot of fun snatching short sessions of a couple of hours on the Railway Pond - and less successfully on other places. Saturday was a case in point when I got the daft carp up on floaters again and might have caught some if my controller hadn't broken. Admittedly the swivel has been in danger of snapping ever since I bought the thing some time in the 1990s! I've affected a repair, and cut the weight down a bit so it sits a bit higher in the water. But I think buying a spare might be wise. A handful of suicidal pasties fell for a 10mm boilie fished in the margin to save me from a complete blank.

With these short sessions in mind I wanted to put together a bag that would contain everything I needed. Just a few bits and bats to cover unexpected losses like broken floats. I had the bag, a Korum Bait and Bits bag that will hold a bucket of mixers or pellets, tubs of bait, camera, bottle of pop, weighsling scales and sundry other stuff. Rather than keep swapping the major stuff from bag to rucksack -with the inevitable memory lapse resulting in a longer session being undertaken without a weighsling or some other essential - I decided to double up on stuff.

I have a set of scales, Super Samson spring balance, lying idle but no suitable sling. As I'm still using an original ET weigh sling for bigger fish I popped onto Ted's website and ordered one of the latest versions in the not-too-big size. It's not quite as deep as my original but it's going to be fine for anything I'm likely to put in it. Best of all it comes in a carry bag. As a rule I leave carry bags in the garage but this one will take my scales and a pair of forceps, and even the small tackle boxes I've put the rig bits in.

Rummaging in my tackle cupboard I'd found a box that  was big enough to hold a spool of hooklink material, scissors, hook packets and some back leads. I still needed something to put the smaller rig bits in. A visit to a tackle shop to buy two shortish banksticks (not carp angler short) found me that box when I wasn't looking for it. A neat little clamshell job. It looked like there had been equal quantities of black and green boxes on the shelf, with more green ones left. Black might be hip, but I know from past experience it's hard to see black swivels and so on in a black box, so I bought a green one. 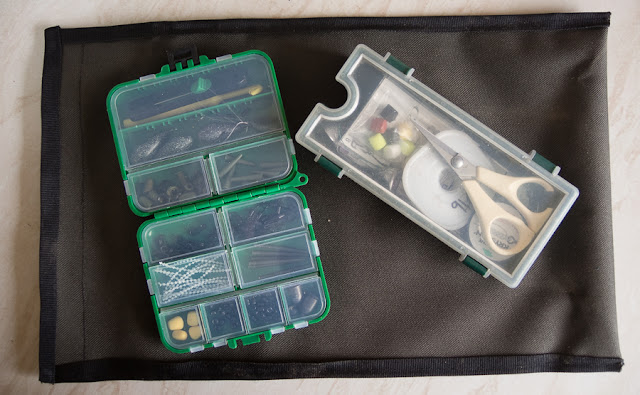 It's always a good idea to carry a cigarette lighter or two in the tackle bag. So when I spotted some with fish motifs on them in the same shop I went for one with a picture of a pike. The carp ones, unsurprisingly, had sold out. 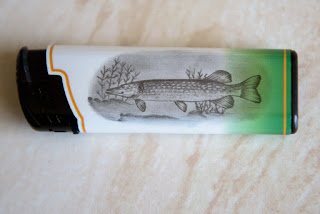 While I was on the ET website I spotted some small boxes that looked really useful. I like really useful boxes so ordered a couple. As yet I haven't found a use for them. But they will be really useful one day, I'm sure! They look more robust than the clamshell box. 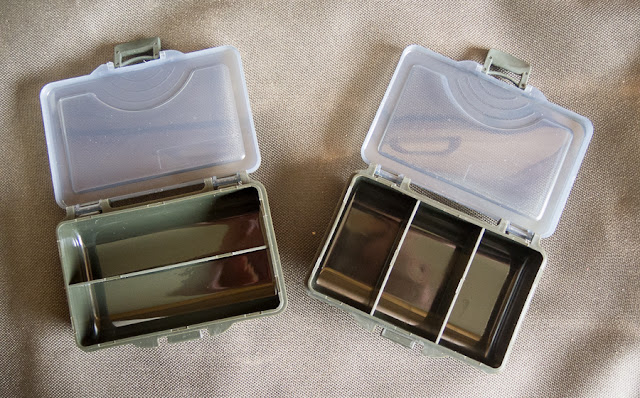 Despite all this planning and organising I took my rucksack with me yesterday for an evening session. And a brolly with the forecast being for rain arriving at nine and leaving at eleven. As it turned out the rain came and went half an hour earlier. Which was good as I got away in the dry. This was to be my last session with carp rods for a while. My intention being to use tench rods for tench somewhere carp won't be such a possibility. Quite when that will be remains to be seen.

I wasn't sure where to fish when I arrived, but seeing a dark pointy fin break surface in the swim I'd dumped my tackle in before going for a wander made my mind up. I'd be happy catching anything. So it was that a fish scarer got lowered in teh margin, a pop-up cast out with a bag of pellets to another margin swim, and Lucky the Pellet cast to where the bream had rolled.

The wind was from the west for a change, warm and not very strong. It was quite muggy too. The trees are almost in full leaf and the hawthorn in bloom - hence me wanting to concentrate on tench until they spawn. It felt like a fishy evening.

It wasn't long before I had what seemed like a liner to the fish scarer. Then another. A longer gap and another liner. I was beginning to wonder if a bream had hung itself on the three ounce lead. Eventually one of these liners pulled the tip round and my suspicions were confirmed. I think the bream had been hooked for some time! You can tell I'm not a carp angler because I netted the bream, put it on my mat, weighed it - and took a photo of it's tubercle covered head.

Even though I sat it out until eleven, still confident, nothing else happened of interest on the fish front. A barn owl made a brief appearance in the gloom of dusk, but it didn't hang around. The resident grebes continued to squabble. There'll soon be young ones which might make the adults even more quarrelsome. Judging by the small fish topping they'll all be well fed.