Whenever you swap your gear from one bag to another don't double check you've put everything in, triple check. That was the second of my trips back home as I set out for my second overnighter of the year. I had only got as far as the village when I realised I had left the milk in the fridge. If I hadn't bought it specifically in the morning I'd have picked up another pinta from the Spar shop. Only a few minutes wasted of my early start. The original plan had been to have my tea, listen to the archers then go fishing. I was targeting tench this time and the overnight stay was mainly to save me from having to get up at daft o'clock. As long as I was in place and organised before dark it would be okay. Just as well really.

There was one carp angler leaving when I pulled up and the lake was my own. Barrow loaded I pushed it round to the far side and took my time looking at swims and plumbing around. Then there was another niggle in my brain. Bivvy pegs. I couldn't visualise them anywhere. Open the  rucksack, take everything out of it. No pegs. Not to worry. It wasn't going to be windy or wet, the two pegs I always carry for brolly use would suffice. Wait a minute. I had brought my Aqua brolly, not the Groundhog. The brolly has a centre pole and the screw in boss that replaces it lives in the peg bag. Centre pole plus bedchair equals waste of time. A. R. S. E.

If there'd been another angler on for the night I'd have left the loaded barrow in his care. I thought of stashing it somewhere but despite the locked gates I didn't want to chance it. Only one thing for it. Back to the car, unload the barrow, load the car, go home, get the peg bag, back to the lake, load the barrow, walk to the swim. Thankfully nobody had turned up and nicked my swim when I got back, just in time to miss the Archers. Looking at things in a positive light, had I adopted plan A and left at seven thirty I'd still have forgotten the pegs, and probably the milk. I reckon by the time I'd got organised I'd have given up.

A tench plan involves fishing two rods to an area baited with hemp, pellets, corn and maggots. In this case with a sprinkling of 10mm fish scarers. I left the maggots out of the equation for my initial pre-dark baiting in case they attracted hordes of tiny wriggly things. Two grains of fake corn and a fish scarer went over that bed of bait for the night and a popped up plastic pellet went along the margin over a sprnkling of mixed pellets.

The light wind died away to nothing as night set in and it was pleasantly mild under the bedchair cover. A few single bleeps, suggesting the presence of fish of some sort, were all that attracted my attention. At five I was up and at 'em. More bait was put out, the rigs checked and the fish scarer swapped over to an in-line maggot feeder with the inevitable pair of plastic casters. Half a pint of maggots got cattied out over the swim too.

Evening had seen a tern and some swifts flying around. Dusk brought the bats out. Grebes were pairing up and fighting - there are three pairs on the lake, at least one of which now has eggs. Morning saw a kingfisher zipping past, dodging my rods in surprise. Rats there had been no sign of. Unless you count one which looked like it had had it's tail tied to a sunken branch. As the morning grew warm there was a strange oily slick emanating from the bloated corpse. 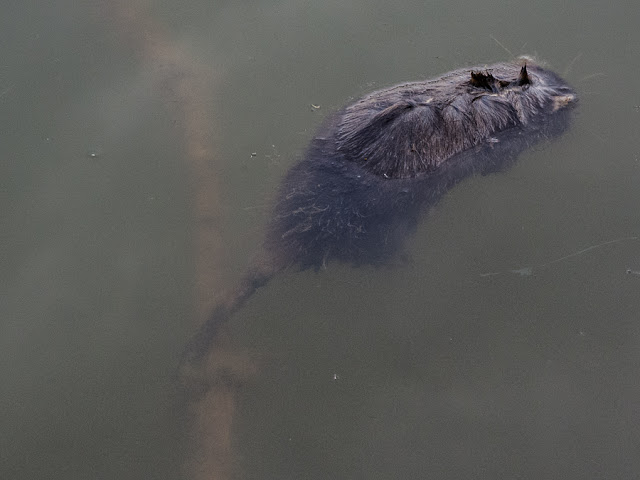 After a quiet period I started to get more single bleeps and blips. The margin rod had been a bit of a bet-hedger and was one of my three test Torrixes. When the pellet got picked up and the rod pulled round I was expecting a carp. It wasn't. With a bigger, stronger hook than I'd used with the corn on Monday I gave the tinca a bit of stick. Despite the rod it pulled back a bit, made some impressive looking swirls on the  surface, and almost got me excited. Netted it shrank a bit. On the mat it looked like a five. It also looked a bit familiar. On carefully zeroed Avons it made five pounds exactly. Not surprising really. Close comparison of the photo I took with that of Monday's fish proved my hunch to be correct. 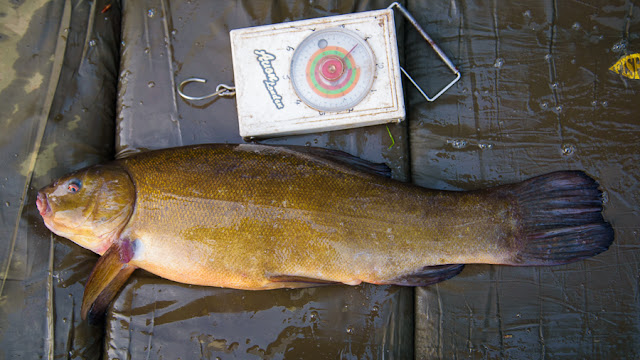 On Monday it had picked up a bait at fifty yards or so, today it was in the edge. Tench are wanderers. Given a lack of features they seem to follow no set patterns. When I've watched them feeding they have been completely random in their browsing. Or apparently so. Far from following a path they are quite likely to double back on themselves or go off at an angle. I think that's partly why my equally random recasting approach used to succeed at Sywell back in the Stone Age. If I thought they was a similar density of tench in this place I'd try it again, but this recapture has got me wondering about the tench stocks.

The carp, on the other hand, appear to be more numerous than I'd imagined. Almost as if they are being magicked into the lake. When the sun had worked up a head of steam and a light ripple was on the water there were carp cruising all over the place. Two drifted down wind just beyond my baited area. Four spooked when a couple of wood pigeons swooped low over the water. There were lazy bow waves to left and right. I couldn't be bothered trying to catch any of them though.

When the last two bacon butties had settled I had a slow pack away pondering my next move.