Summer had definitely arrived on Monday. With the air temperature over 20 degrees and even a strong easterly warm enough to sit out in a t-shirt in there had to be carp on the surface. The Railway Pond seemed like a good bet for a duffer like me to snatch an easy sucker off the top.

I travelled light with one rod, an original Chorley Anglers Lure Special which I revamped a few years ago, a bucket of mixers, a bag of bits, landing net and unhooking mat to sit on. 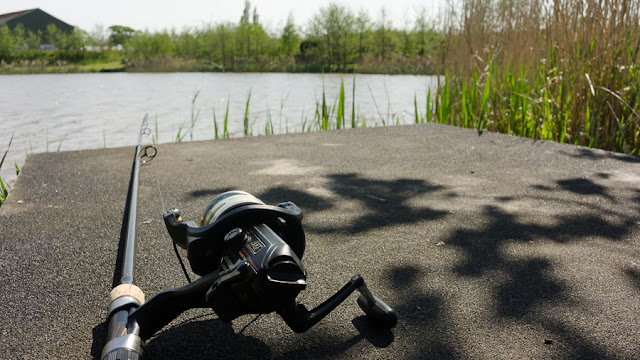 The up-wind swims were taken by pleasure anglers so I dropped in the windward bank to see a few smallish carp cruising around. The wind was too strong to fish a controller so I anchored a surface bait in a long hooklink. A couple of carp had a look at it. One was too small to have enough suction to drag the bait down! That's the trouble in this 'non-commercial'. It's full of carp that are two small to be called pasties. They're more the size of party sausage rolls!

I worked my way along the far bank until the other anglers had departed and I could get the wind behind me. Even with my useless skills I soon had plenty of fish swirling away in front of me. The controller back in action and drifting towards the fish. But as usual, despite a couple of takes from fish with larger mouths, I caught nowt. Back home via the chippy and it was time to search the internet for bow-fishing gear...

Tuesday and summer had gone on holiday. Cloudy but warmish. Then, after I collected my new 'carp' reels, loaded them with line and rigged them up on the rods I was itching to give them a try out. As much to get the line bedded in (and make sure I'd put enough on over the backing line..) as to try to catch a fish. That was the cue for the rain to arrive. I went anyway. New tackle has to be played with. 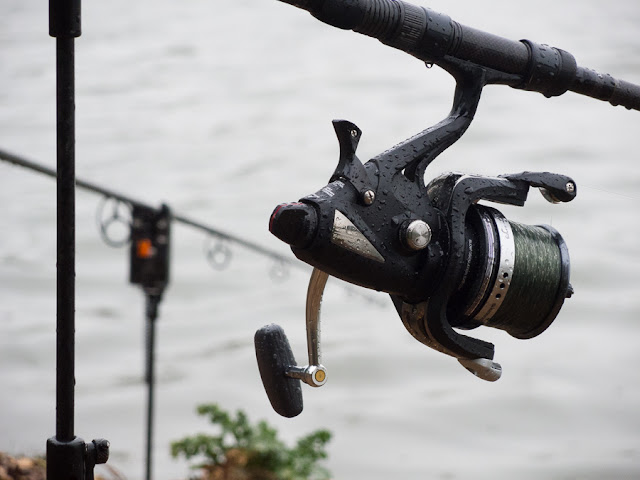 The rain was light as I set up so the brolly waited until everything was in place. Two grains of plastic corn and a plastic pellet in the margins over sprinklings of the respective real baits, and a pop-up chucked out mindlessly. Under the brolly, sat on my low chair at its lowest setting, I discovered my leak repair hadn't been 100% successful. At least it wasn't icy cold water dripping on my leg. 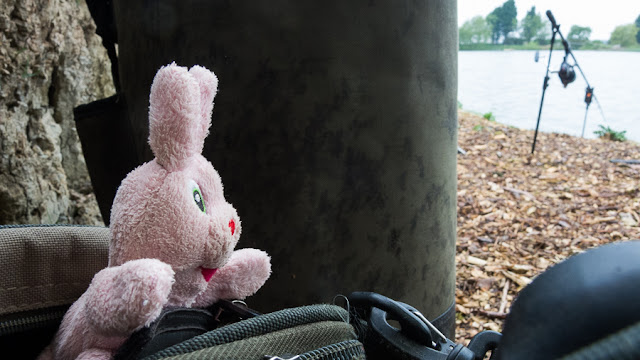 There wasn't much variety of birdlife to watch, but with nine great crested grebes on the lake, one sitting on eggs, there was plenty of activity. One pair were engaging in their head shaking courtship ritual, but with no weed gathering. The others were milling around, diving, and adopting threat postures before chasing each other. Why there were so many grebes on a comparatively small water I don't know. There were lots of tiny and small fish topping and leaping towards dusk though. So I'm assuming the grebes are there because the food is plentiful. 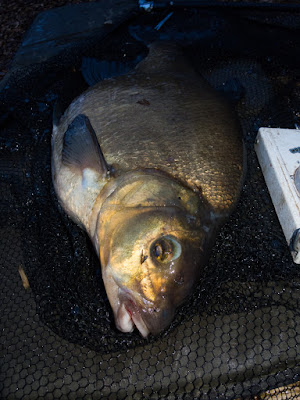 With carp rods and carp reels in use I felt certain a tench or two would make a mistake as they patrolled the edges and found my loose feed. When a take came it wasn't a screamer. All that happened was the left hand bobbin dropped a bit, went up a bit, dropped a bit, went up a bit... There was something on the end of the line when I picked the rod up. A plastic bag by the feel of it. Under the rod tip it got a bit heavier and felt vaguely alive. I'd forgotten that I'd tried to catch the bream in the lake last year, so it was a bit of a surprise when a dark old-looking bream rolled on the surface before sliding over the net. A fish that was round-bellied with spawn.

Not much of a test for the new reels. It made a change for the new tackle curse to fail though! One thing was for certain; the new reels are smoother than my old baitrunners, a couple of which are making peculiar noises when I'm winding in. Although the old reels are likely to go on my eel rods now as they are not completely worn out.

The last of the particles went in and the plastic corn back out over the top of it. Despite being an unexpected species my confidence increased. Not least because it was not yet dark. Surely a tench, carp, or even another bream would be along soon?

Of course my confidence was misplaced. The rain eased off as I thought about packing up. Returned as I wound the first rod in, but was kind by blowing over as I set off back to the car. Then it came back on the drive home. Another pleasant change.