It's been a funny old winter. Very barber's cat-ish - wet and windy. So when the wind dropped from gale force to merely strong and the sun shone it seemed rude not to squeeze in a three hour session up to dark once work was boxed off for the day. A quick check of the weather forecast saw me able to leave the repaired brolly behind with the expectation of remaining dry. Unlike last week there was just one vehicle in the car park, and the angler was nowhere near the area I fancied fishing.

I've known warm February days over the years. Warm until the sun begins to sink towards dusk that is. But I can't remember elder leaves bursting forth on the third of the month. Elsewhere hawthorn have been coming into leaf for a couple of weeks. All very odd. 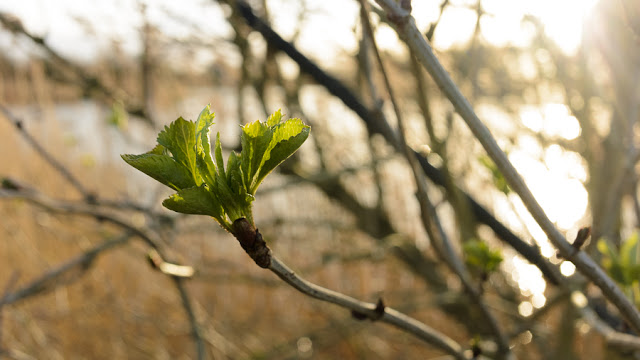 Casting pike baits out at three in the afternoon and expecting to catch is not something I'd have done with much hope in years gone by. even fishing for a couple or three hours didn't seem like 'real' pike fishing, but thee days I'm more than happy to do just that provided I feel like a pike or two is on the cards. There's nothing like being confident. Something else I wouldn't have done is move my baits every fifteen minutes. Yet that was what I ended up doing in the first swim I chose. One with the north-westerly blowing straight into it.

Although chilly, the wind was putting just the right amount of ripple on the water to make it look pikey. I was moving the baits because I wasn't happy with where the floats were. It was a few minutes after recasting a mackerel tail further along a reed bed that the float began to move.

At the risk of repeating myself the fish did the usual thing of not pulling back and imitating a sack of spuds as I dragged it towards the net. It even lay reasonably peacefully in the net while I got the mat, sling and scales sorted out. Like the fish I caught last week there were leeches on its head. 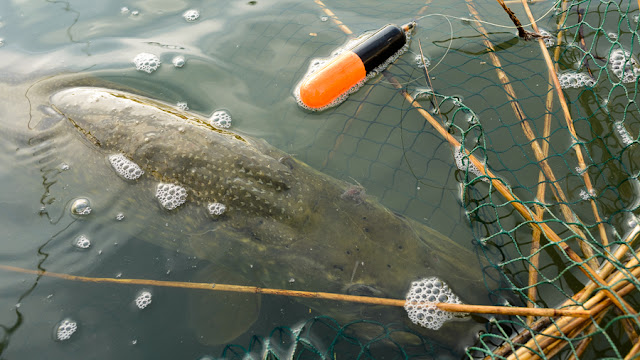 When I delved into the rucksack I realised that my retention sack was at home, so I left the pike in the net and set up the tripod for a selfie. It was the first for a while that was worth the effort. I ended up rushing the pics as I'd struggled to remove the hooks. Not because it was badly hooked but because it took me a while to realise that the treble wasn't twisting free as it should have done because the bloody forceps were twisting. As soon as I got my trusty ancient, seven inch, forceps on the job the hook popped free. the bendy forceps were slung into the distance. I'd used them quite a few times without trouble so I'm not sure why they failed me this time. There must be some decent ones available.

After the chaos that the fish had caused, even though I released it in the next door swim, it felt like time for  a move.That's something else I wouldn't have done in the past. move immediately after catching a decent pike. I just seem to have itchy feet these days.

This time I was happy with where I'd placed the baits so I settled in to listen to the not-too-riveting one day match from South Africa and left the rods alone. The right hand Delkim didn't make a sound when I saw the margin float fall flat and set off away from the bank. A quick strike connected with a fish that didn't feel like a sack of spuds, but which actually pulled back! It wasn't a monster but it was a game little beggar. If the bigger fish had been fighting like this one they'd have been a lot more fun. I slid it into the sling just to make sure it wasn't a double. It wasn't quite. Not quite two hours fishing and a couple of pike banked. Happy days.

Over in the calm water small fish had been topping since I arrived. A kingfisher had flown by a couple of times. Birds were singing. It was as if all the wild creatures had woken up from a winter torpor. The whole place felt more alive than it had for months.

Another move was on the cards but something made me stay put and reposition the baits. It turned out to be a wise decision. Half an hour after the second fish, at quarter past five, I saw the far off float wobble and topple. I grabbed the landing net and promptly kicked the rod connected to the bait the fish had picked up, tangling the line round the antenna of the Delk. When I'd got the mess sorted out I was sure the fish would have felt something was amiss and dropped the bait. To my amazement the float was still on the move. 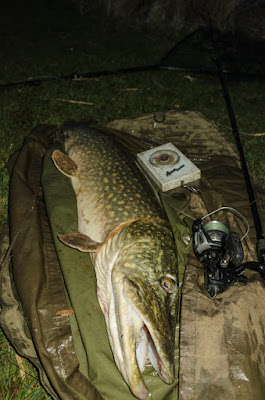 This time the strike was met by a writhing sensation. I'd heard of a few eels being caught from this place during the winter and wondered if that was what had picked up the macky tail. As I bent into it I realised that it would be a bloomin' big eel if it was. The fight turned into a cross between the potato sack and a pike. Eventually a pike that took a bit longer to slide over the net cord than the first of the afternoon was resting in the net.

Although it was clearly a bigger fish I couldn't be bothered setting up the tripod as the light was fading fast. If it was big enough for a selfie I'd put it back in the net, wind the other rods in and take my time. As it turned out, although it had the head and shoulders to be a red letter fish it was a bit on the lean side. It was big enough for me to break the net down and use the pole to steady the scales. Why people need a designated weighing bar when you can use the spreader block of a landing net head is something I don't understand. I guess some people like having loads of unnecessary junk to cart around with them.

The fish was in good nick, though it was another carrying a few leeches. I was in two minds as to packing up or sticking it out until darkness fell. In the end I hung on. My luck had run out, but at least I'd cooled down after working up a sweat. I must have been warmed up because it didn't feel as cold as the five and a half degrees the car's thermometer was showing when I got back to it.