Feeling perkier than yesterday's relapse into the world of phlegm and endless coughing I decided to have another short pike session this afternoon, despite the promise of rain. The method in my madness was to see how the repair I'd made to one of my brollies would fare. Not long after the warranty ran out one of the seams pulled apart near the boss resulting in drips. Mostly I used another brolly because of this, despite this one having fibreglass ribs and weighing less.

One one of the forums I use someone I know in the real world mentioned they had used spinnaker tape to repair a tear they'd made in some waterproof clothing. I Googled the stuff and ordered some from Amazon. It's not cheap stuff, but it's intended for repairing sails on yachts. It's certainly sticky, and surprisingly thin. I put a piece on either side of the brolly a good few weeks ago. This was its first outing. Unlike the repair attempt I'd made previously using gaffer tape this one hadn't come unstuck. It's early days but it looks hopeful. If it does last there'll be a few patches on my bivvy next spring! 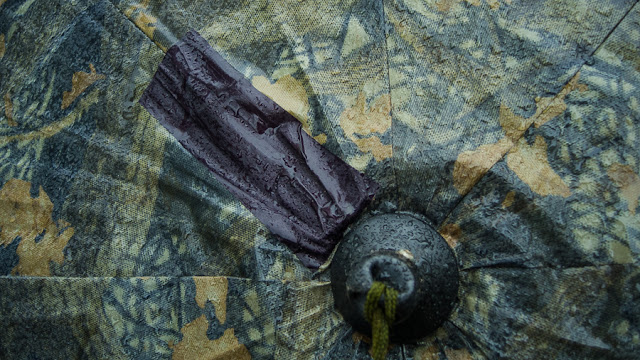 Arriving in the dry at half past one I dropped the herring tail saved from the previous session in the margin, the lamprey head got chucked out a fair way and a fresh smelt lobbed out mid way. The sky was overcast but bright, the wind light. Even so the rain didn't take long to turn up. And with it came a stronger, and slightly chilly, wind. A sparrowhawk made an appearance, probably in search of the numerous fieldfares which had been perching watchfully high on the hawthorns. 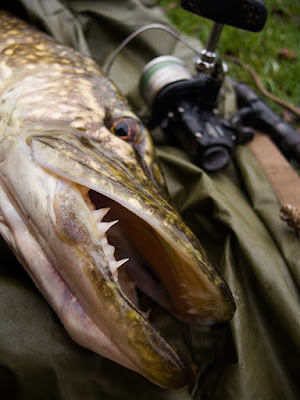 I had almost finished my second cup of flask tea when the sounder in my pocket began to burble. The herring float was dipping under the surface and the rod top pulling over as I drained the last of the tea and grabbed the net. The fish was taking line steadily as I picked the rod up and turned the reel handle. This wasn't a jack, but it wasn't a monster either.

Despite a complete lack of any desire to swim away from me there was enough weight to the fish to keep the rod bent. Once in the net the bloody thing woke up. It was lively on the bank too making what should have been a simple unhooking job take a bit longer. The scales proved my guestimate to be correct. A shade over ten pounds of skinny pike.

Although the herring tail had been hanging out the side of the pike's mouth as I wound it in it remained attached to the hooks so I was able to salvage it, tie it to the trace and swing it back out.

The rain set in for the duration, but the wind eased off. It wasn't particularly heavy rain, and at least the day was quite mild making things less dreary than they might have been. I moved the baits about now and then in the hope that I might provoke some interest. It was not to be. The sky had darkened bringing dusk earlier than the other day. The opportunistic session came to an early end at four fifteen. With more rain forecast for the next few days it was nice to get a fish under my belt before it arrived to deter me. With a bit of luck I'll be up for more piking when the wet weather goes away.