It's that transitional time of year, when summer fishing is over but winter fishing doesn't feel quite right. I know I could go piking on the drains, but they don't fire me with enthusiasm. Hitting the river for barbel is another option that doesn't appeal. These last two weeks of late summer days with temperatures as high as we had during high summer have confused matters even more. Yesterday there were a couple of swallows over the water and an early morning chiffchaff was calling, yet five whooper swans dropped in for a swim around and come evening the pink foots were nosily flighting in. No wonder I've been confused. That's my excuse for trying to catch carp. 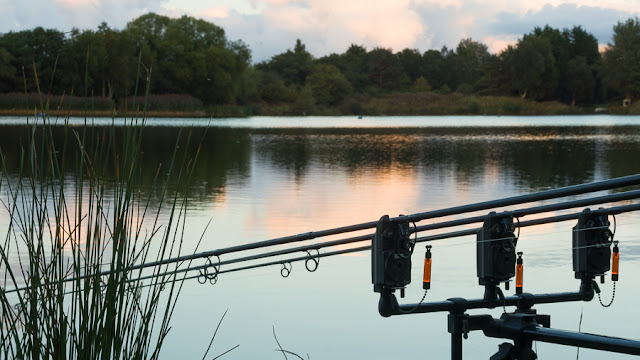 An evening up to eleven session produced one line bite on the difficult lake. There might be twenty five fish in the place, most of them not worth catching. Even the real carp anglers aren't having any success. I think that's why I've been having a go. The challenge. But I can only stand so many blanks and have been visiting the Railway Pond where the challenge is to avoid the carp. I'm succeeding! The last two hours are the best chance to avoid other anglers too. The first session ended with a screaming run and another of the pond's skinny flappy things. However, I did notice some carp behaviour that I thought might push the odds in my favour next time. 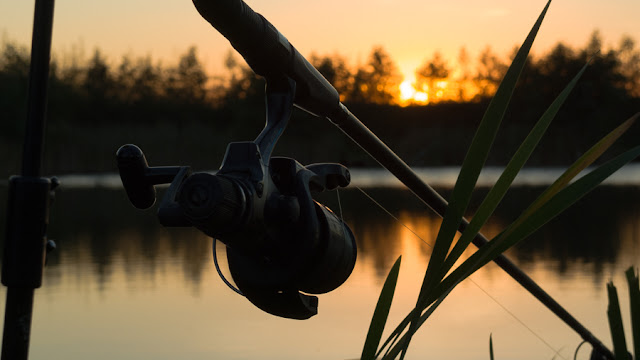 With work out of the way and yet another red hot afternoon under way, Thursday saw me setting off for an overnighter, intending to stop until after lunch. I left it a bit late and only got the baits out by six twenty. Two grains of fake corn over a bed of hemp and corn to the left margin, a spot I've seen fishy activity on a few occasions. A boilie/glow corn cocktail with a stringer out to nowhere and a 14mm pop-up over pellets close in straight over the now-dying weed edge.

My usual regime for bivvy sessions is to restrict them to the months when it goes dark at nine. I can't abide the long dark hours.  Right now it's dark before eight, and although the days have been hot the temperature soon drops with the sun. Six thirty and it's fine out in a t-shirt, by seven thirty it's almost time for the bunny suit!

The moon was just past full but still bright enough to cast long shadows as it rose, directly opposite me. Then the mist rose over the water and hung around all night. By daybreak it had turned into an all-enveloping fog covering the low-lying land all around. It didn't burn off until gone nine in the morning when the heat returned. 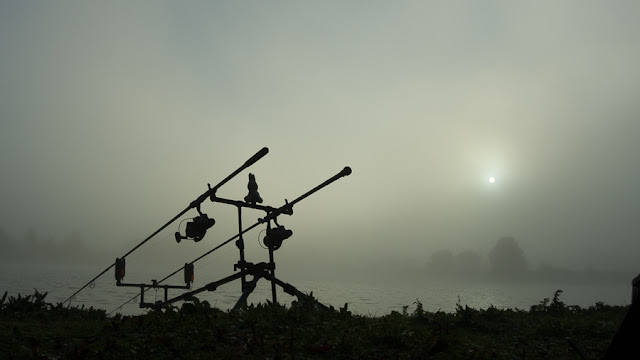 The alarms had remained silent all night long. Not a liner or anything. There had been fish topping at dusk and some noisy surface splashing from small fish during the night. No signs of carp, tench or bream though. The only indication I had was at quarter to eight when the cocktail bobbin dropped back a few inches. I waited for it to drop further or to fly up to the butt ring, but it didn't. After the bacon butty breakfast washed down with a mug of black tea (I forgot the milk...) I had a recast of all three rods. It was no wonder the corn hadn't been touched. The rig was tangled. Bugger.

It was tempting to sit it out all day, but by two I'd had enough. The thought of getting a bend in a rod, even from a flappy thing, was itching away in my head. Back home for a brew with milk then trim the gear down and snatch the last couple of hours at the pond, then call at the chippy after I packed up. Simple plan.

I don't know why I decided to band the two rods, landing net and banksticks together instead of using a quiver. I find it an awkward way to carry stuff. But that was what I did. The swim I fancied was vacant, so the rods were soon set up and the sticks in place. Then it was time to set up the landing net. That was odd. I had the net and half of the pole, but not the essential part. The part with the spreader block. I retraced my steps to the car hoping it might just have slipped out. Nope. Not in the car either. I'd have to manage without.

Thankfully, being rubbish at catching carp, the net problem didn't need to be overcome. There were a few liners, and some half-hearted tugs (probably from over ambitious baby carp) to make the alarm bleep. Nothing positive though. I mostly spent the time watching migrant hawkers hawking, hovering and chasing each other until it got too chilly for them. By which time the starlings and geese were flocking in to the safety of the mere and its reedbeds for the night. It's quite a spectacular sight, and sound, when the pinks fly in. There's something about the sight and sound of thousands of pinks that evokes feelings of lonely and wild places.