Last week I gave up a short eel session an hour early because nothing was happening apart from a bad moon rising. It felt like a waste of time for some reason. Following that work got in the way as I started to play catch-up after some long awaited rings showed up. 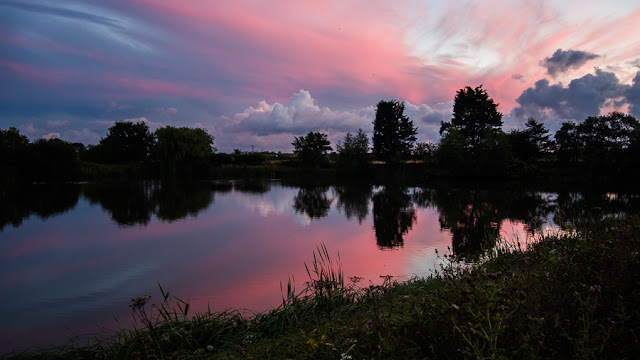 Last night I snapped and found myself in that automatic pilot mode putting the gear together for an overnighter. It just happened. I was on my way as soon as I'd finished my tea. The original idea was to forget about the eels and get a good night's sleep tucked up in my sleeping bag while the rods pretended to fish for carp. But at the last minute I threw the eel rods and deadbait bag in the back of the car.

There wasn't much time to get set up and again the auto-pilot kicked in and the eel rods got cast out. A roach tail down the edge and a head section which, when hooked through the bottom jaw and out the skull, withstands casting better further out. I also used a slightly bigger deadbait than usual. A rod baited with two grains of fake corn got dropped in the edge on the other side of the swim to the margin eel rod. Then it was up with the brolly and out with the kettle.

After a hot day the sky was clear and the temperature set to fall once the light went from the sky. Before darkness had arrived the roach tail had been pinched. The silhouette of a tawny owl flew over the lake, bats and moths flitted around the brolly front, and I put my bunny suit on before it got chilly. It was ten o'clcok when something picked up the margin bait again. Another missed run. I'd barely sat down after recasting a fresh bait when the other rod was away. This time I connected with an obvious eel.

In the light from my headtorch it looked to be a chunky fish, but it wasn't pulling too hard. A broad head and wide mouth, fat behind the head but quite short and thinning towards the tail. My hopes of a three were fading. They faded completely once the eel was in the sling and weighed. The same weight as the last eel I caught. Those three pounders know how to avoid my baits. The rest of the night progressed in usual eel fishing style. Runs being missed every time I started to nod off. Most of them were coming to the bait out in open water. Which is something I've noticed both here and on the water I fished last summer. So much for eels scavenging in the margins. 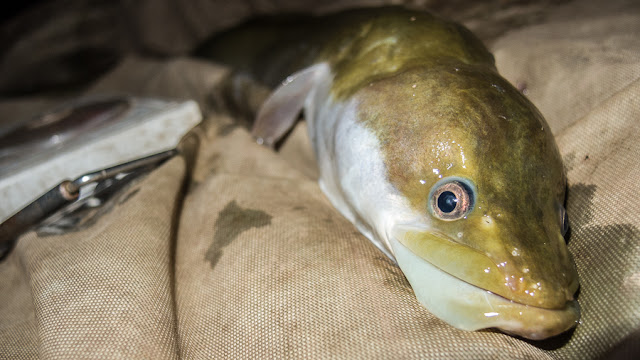 The tawny owl flew back over the lake and perched in the tree behind me where it started hooting. Thankfully that didn't last too long. Daylight isn't arriving until almost six these mornings, and after a long lull in the runs another materialised as the sky began to lighten. I gave the eel baits another half hour then swapped over to 'carp' rigs - without expecting any action. There had been no signs of carp or tench before dark or during the night, and none as the sun rose. The night had remained still with a heavy mist rising off the water and only clearing completely by about eight. At least there hadn't been much of a moon, nor any signs of rats.

With more warmer days forecast this week, the nights warming too, I might have one more eel session before calling it a summer.
Posted by Dave Lumb at 11:47 am