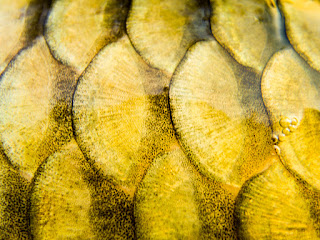 Full of tenchy enthusiasm I set my alarm clock on Tuesday night so I could make an early start on what promised to be a hot spring day. It goes without saying that half an hour after I'd switched the alarm off I was still lying in bed. After a drive through the dawn I arrived at the lake with enough light to go fish spotting. So that was what I did. Not that I spotted any fish. Not tench at any rate. The only signs were small fish dimpling and rolling in the mirror calm surface.

It felt good to be up and around before the hum of traffic competed with the sedge warblers and whitehroats. That summery smell was in the air too. Despite seeing no signs of tench - which I rarely do on this water - I was happy enough in my choice of swim.

One bait to the edge of some pads to my right, one in open water straight in front and the third down the left hand margin. Continuing my 'carp' fishing approach I had fake corn on one and pellets on the other (if there wasn't a pointless boilie ban I'd be using Tuttis, but there is, so I'm not). For a change I was trying a Spicy Sausage pellet-O on the margin rod. In the vain hope that bream might not like the taste but tench will.

I'd not been fishing more than fifteen minutes when the left hand rod began twitching, the bobbin not moving. It sure looked like a bite. A bream bite. I picked the rod up and was surprised to connect with a fish that was almost in front of me. Judging by the feel through the line the fish must have taken the rig through weed as it cam towards me. Hence the lack of a drop-back as the line stayed tight. The fish was no bream either.

The scrap was good one. The fish hugged the bottom, zig-zagging around the swim trying to make for the pads without going on a run. I was convinced that it was a good tench. A really good tench. I just couldn't get it up on the surface. A big boil came up one time when I tried. I wasn't taking it easy on teh fish, but I was being careful. If that makes sense. Then it rolled. Tench don't have big golden scales. The gloves came off and the nuisance fish was skimmed into the net. It didn't even get weighed. A bit tatty with a split dorsal, some mouth damage and a few missing scales. 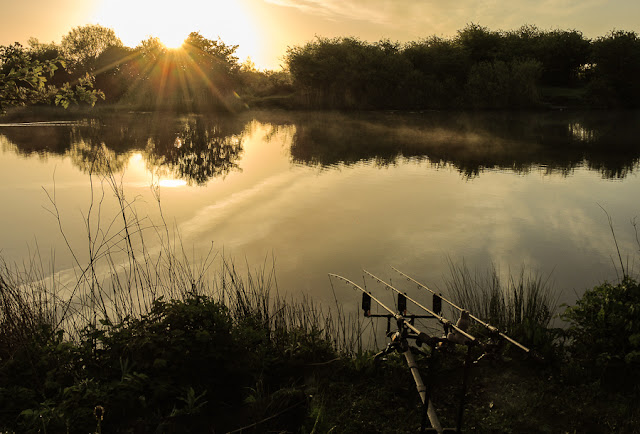 With that pest turning up so early I thought there might still be a chance of a tench or two after the disturbance. More mixed pellets were cattied out over the close range baits. The open water rig got recast further out with its accompanying bag. I watched the mist rolling over the water as the sun slowly rose to burn it away.

Warblers zipped hither and thither, a great tit foraged low down in the brambles, an orange tip flitted about. Even  the swans and Canada geese avoided my lines. Small fish continued to dimple and roll.  All was right with the world. Apart from the lack of tench.

My hopes began to fade when bubbles appeared close in to my right. Had they been the fizzy bubbles of tench I'd have moved one bait on top of them, but they were the bubbly bubbles of carp. With them in the area my hopes began to fade. Nontheless, as is always the case with my early morning sessions I fished on for longer than planned. By the time I'd called at the pasty shop on my way home it was near enough lunch time.