Of mice and rats 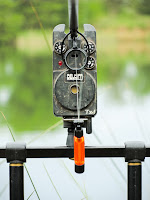 Bank Holiday Mondays are usually off my list of fishing days, but when the last one was warm and sunny I couldn't resist trying for some evening tench. My first choice swim was occupied but number two was free. The usual rigs and baits went out with the usual bags of pellets followed by sprinklings of pellets over the baits as they were all being fished close in. Around seven, as the cooling wind began to drop, fish started to roll and bubble. The new bobbins remained motionless. So I took more photos of them to relieve the boredom!

Whitethroats were active in the hawthorn, singing and flitting about. A song thrush perched on high and sang it's little heart out. A swan drifted gracefully by and picked up one of my baits. I wound that one in and whacked it out to deeper water.

Pacing around behind my swim I found the remains of a rat. The decaying corpse didn't stop it's relatives from scurrying around behind me when the sun had set. A few minutes before packing up time there were a couple of bleeps to the long chuck rod. Most likely liners. I was glad that the growing cloud cover was keeping the evening warm - because I'd left my fleece at home.It was encouraging to drive home in the dark with the thermometer reading still in double figures, even if the chippy was closed when I past by.

Work did its usual trick of keeping me occupied through the week. Which wasn't a problem as the rain had returned. Thursday was as sunny as it had been forecast to be but I didn't rush to get the rods out. The last few sessions hadn't seen much fish activity until seven so I felt there was little reason to rush.

Two of the rigs were simply retied to ensure reliable knots and cast out inside their pellet bags. The other rig got changed a little. I had been wondering if a longer hooklink might be worth a try and had tied one up in advance. My thinking being that four inch hooklinks might be burying the baits in the bottom weed. That rig got a different bait attached and was lobbed out to a nice looking gap in the pads to my left. The others were out in open water and near some pads on the right.

Almost as soon as I'd sat down the right hand bobbin dropped a fraction then remained still. Twenty minutes before seven it dropped again, then jiggled and rose before falling back once more. The result was a be-tuberculed bream around the three pound mark. 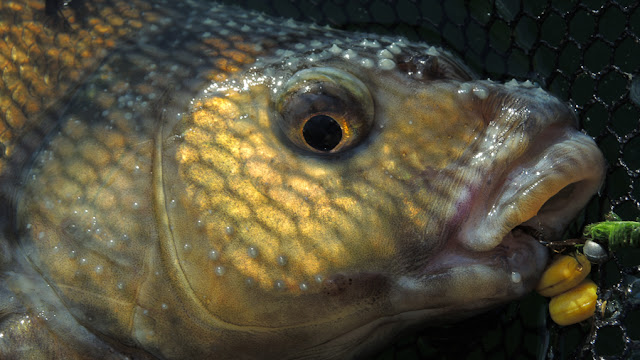 It was twenty past eight before the middle bobbin dropped slightly. This open water fish proved to be a hybrid a pound or so smaller than the previous two this season. Despite the surface going calm as the light faded and the wind dropped very little was showing in the way of fish. A bream had rolled in front of me but the only other fish topping were small roachy things. Bubbles were notable for their absence. Strange considering the conditions as the wind had been blowing not the bank I was fishing from all day. I was glad to have remembered my fleece this time because I needed it. Sure enough the car's thermometer was reading in single figures on the way home.

The tench, which are what I'm trying to catch, are continuing to play hard to get.I've heard of one or two being caught, and more being lost, but they're keeping well away from me. Maybe they'll wake up next week if the temperature rises as forecast.

Back at the work bench I've been dealing with the effects of mice on rod handles. I had a call from someone who had had mice nesting in his rod bag during the winter, making their nest from chewed up cork and Duplon - which must have provided fine insulation for them! In the tradition of the before and after photos you see of slimmers I photographed the ravaged handles in an unflattering way, and made a better attampt for the after pic...