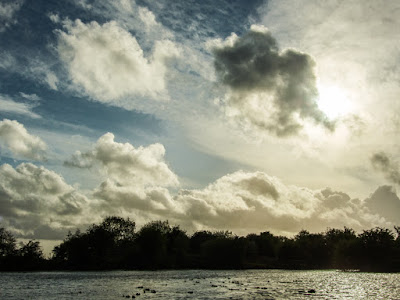 The weather and work have been discouraging me from putting the rod hours in  lately. Not to mention the lack of tench. Wednesday the 20th saw me sitting it out in the teeth of a strong north westerly. It was a bright evening but out in the open it was cold. Pop behind a thick bush and it was warm.

Dramatic clouds scudded by, the water sparkled and lily leaves flipped over showering spray as they did so. Had it been a hot dry wind it would have been enjoyable to behold, but having to wrap up in a bunny suit in late May doesn't inspire me when it comes to catching tench.

The now customary bag and pellet approach was in action. Trying to catty out freebies into the wind would have been futile in any case. It took a couple of hours for the bobbin on the corn rod to do a bream jig, and another hour for it to repeat the dance. Not even big enough to think about weighing and only grudgingly, and badly, photographed for the purposes of this blog. It was one of those sessions when I was glad to pack up 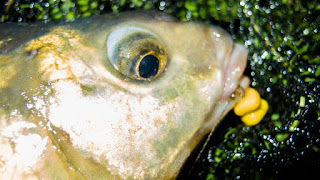 It's funny, that although I like fishing this water I'm frustrated by the rules. I don't like having my hands tied when I'm trying to catch fish. especially when there's things I'd like to try. Tenchy methods that have worked for me elsewhere. When a chance came to fish somewhere with fewer restrictions, but probably smaller tench, I gave it a go. Although it's not as attractive a venue I'd be able to give the LIttle Richards a whirl.

So it was I got my gear together for an overnighter. Or so I thought. Loading the barrow I realised that my sleeping bag and cover were back home. Thankfully the night was set to be mild. A rarity this spring. At least I hadn't forgotten my bunny suit! Everything was in place before dark and I was all set to watch the isotopes glow increasingly bright.

The bag approach was abandoned. Mainly because I'd forgotten them and the pellets I put in them. Instead I put PVA foan nuggets (salvaged from a parcel rather than bought in a tackle shop) on the hooks to make sure they stayed weed free. The main baiting of hemp and corn was done by catty. The double fake corn rig always gets used on one rod when I'm after tench, at least until they show a marked preference for something else. That was on the right. On the left was a dumbbell wafter on a longer than usual hooklink and in the middle were two 10mm boilies. Rooting in my bait cupboard I thought I'd grabbed a bag of Little Richards, but I hadn't. What I did have were some monster crabby things. They'd do. But I wasn't totally happy without the rock'n'rollers.

Although  a couple of liners every time I nodded off was all the action I had before packing up around nine and heading off to get some jobs done I'd enjoyed being out at night again. Having a barn owl fly past between my brolly and rods three times just after dawn almost made up for blanking.

A few days later I was back. This time with my sleeping bag... Also with a packet of choc chip cookies to nibble on - and the right 10 milly baits. I was buzzing! The hemp and corn was supplemented with a scattering of pellets, and the PVA bags used on a couple of the rigs. Not long after setting up the bobbin on the middle rod dropped back convincingly, jiggled, then began to rise. My strike met with the proverbial thin air. Not to worry. Everything felt right and the magic beans had got some interest. It was another mild night, but one completely uninterrupted by any sounds from the alarms. A few fishy noises were heard, but that was it. At least I'd got some shut eye.

A week later there was a dry night forecast and I thought I'd give it a go. The plan was to repeat my previous tactics. The only difference was that I shortened the hooklink on the wafter rod. I made sure that all mainline knots were retied and tested before casting out. Before dark there were bubbles bursting in the vicinity of the wafter. Not really fizzy enough for tench, but then again, maybe they were.

As the light faded the cloud cover remained keeping the temperature up. Unusually the wind didn't drop away at sunset. There was a good ripple, almost a light chop, on the water. Everything felt right for some action. It was 10.15 when the right hand bobbin dropped back sharply. I stood by the rod wondering if that was it when the bobbin jumped, then flew to the butt ring. The rod was hooped right over as soon as I picked it up, line peeling off the spool that I was trying to brake with my forefinger before knocking the anti-reverse off and engaging the gears. The line went slack. Cut above the sliding stop of the helicopter rig. I was baffled. The rig was replaced with an in-line set up. Easier to rig up and something I have more faith in for big fish. Another wafter went out in a bag of pellets.

It was coming up for midnight, my eyelids getting heavy when the swim lit up bright red and the sounder box in the brolly ribs screeched. Little Richard was singing! Again the fish had run to the right, but the line didn't part on anything. After dark I take my specs off when intending to get some sleep, so what I could see in the light of my head torch was either a carp or the hardest fighting bream on the planet! Despite the 2lb test curve of the eleven foot Torrix it didn't take me long to get the fish in the net. I'm going to have to take up carp fishing in earnest. That way I might start catching tench. The one saving grace was that the fish was a common and not a pot-bellied mirror. 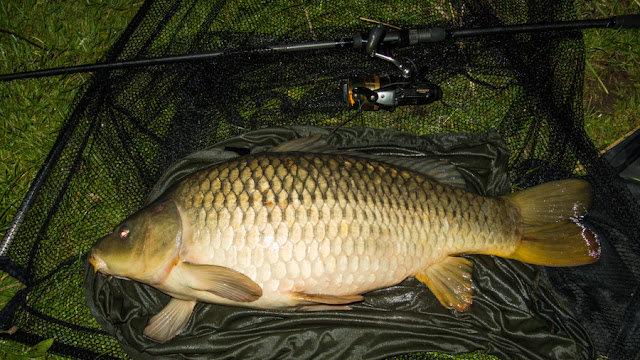 Around one the wind began to ease. Not quite full the moon was still bright enough to cast long shadows. I don't know what it is about being by water on a warm night that I enjoy, but it does relax me. Even the reed warbler singing its erratic song all night didn't drive me nuts.

After a dawn brew I baited up with more hemp, corn and pellets. Checked the rigs and refreshed the baits. It took a while for the sun to rise and swing round and burn the dew off the grass, but a proper late spring morning was in prospect. A bacon butty, and a brew accompanied by a custard cream or two set me up in good style. It wasn't even a surprise when something made off with my little orange balls just before seven. At first I thought it might be another nuisance fish but when it gave up easily I realised it was my first tench-by-design of the year. One of the smallest male tench I've caught since I fished for them on the local canal in the early 1980s! 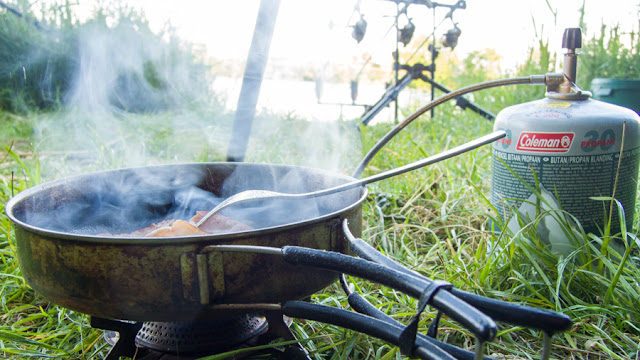 One thing about concentrating on big fish waters is that the average size is high. That's why they are big fish waters. The canal tench were big if they were over three pounds, even the females. The biggest I ever caught was 3lb 12oz, most were around two to two and a half. On the big tench waters such fish are almost unheard of and fives are about as small as you'd get. Small tench don't fill me with hopes of big ones. They are kind of cute though. 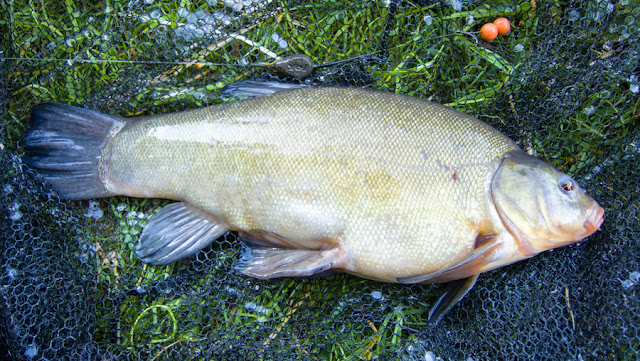 It'll be June tomorrow with the hawthorn is still in fresh flower and the elder not yet in bloom. It really is a late spring this year. Maybe the increasing temperatures that are supposed to be on the way later in the week will get things back on track and I'll manage to nobble some more tench by design before the eel bug bites me again. Or should I give in and deliberately target pests?