Moving with the times

A few weeks ago my ancient mobile phone packed up on me and I was forced to have a 'smart' phone. That meant I an now able to 'enjoy' the delights of phoneography. I'm sure that more expensive phones are better as cameras, but one thing is for sure, in decent light even my simple 6 megapixie can make pictures which are good enough for blogging. If good enough means in focus and correctly exposed. In deference to the shape of screens these days I took most of my pictures in the native 16:9 aspect ratio. Yesterday I took the opportunity of a free and sunny afternoon to chase some roach at Sheep Lake. While I was there I played around with the phone and my other cameras. See if you can tell what kind of device made them! 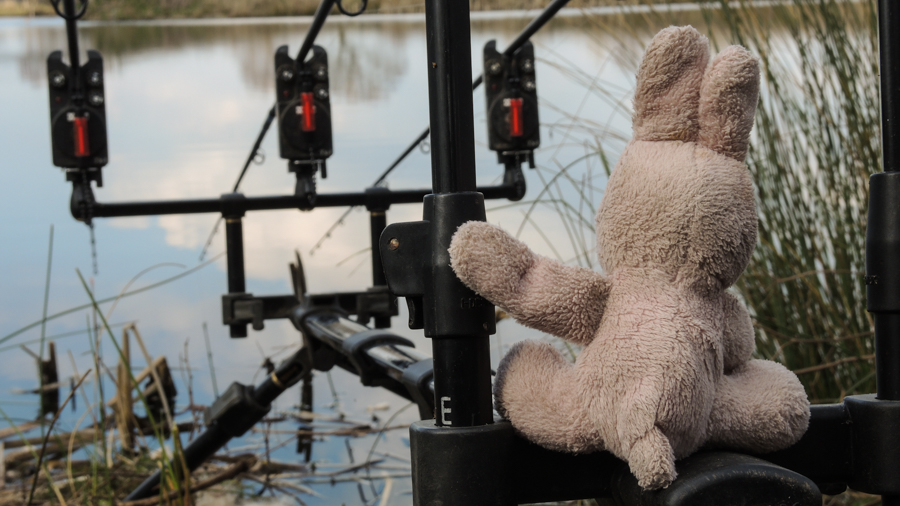 After videoing the frogs in my pond I thought I'd also try my hand at what seems to be taking over fishing blogging for people who can't write - video. Way back I made a few clips with my old cameras when fishing, but things really have moved on in just as few years. Even compacts can produce high quality results. I don't own, and have no plans to buy, a GoPro with it's give-away neo-fisheye lens that gives every video shot with one the same look. Fine for point-of-view footage, but it becomes tedious when used for everything. 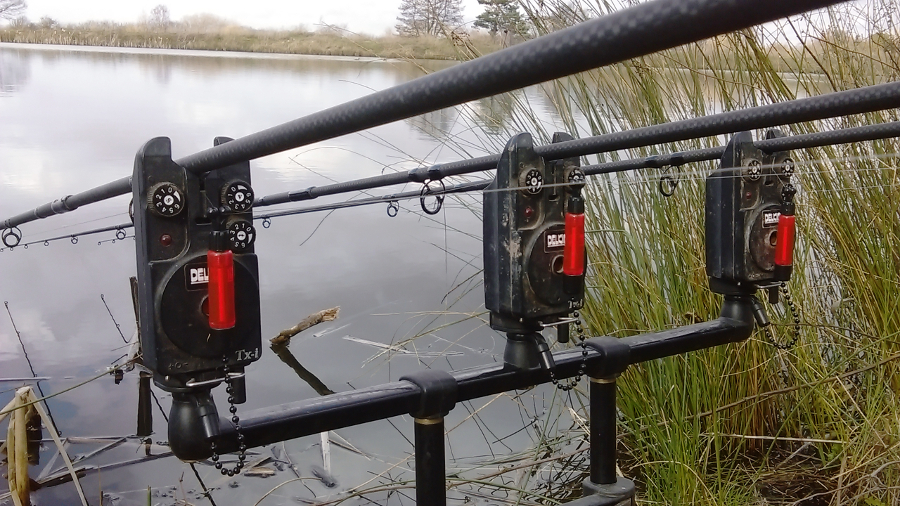 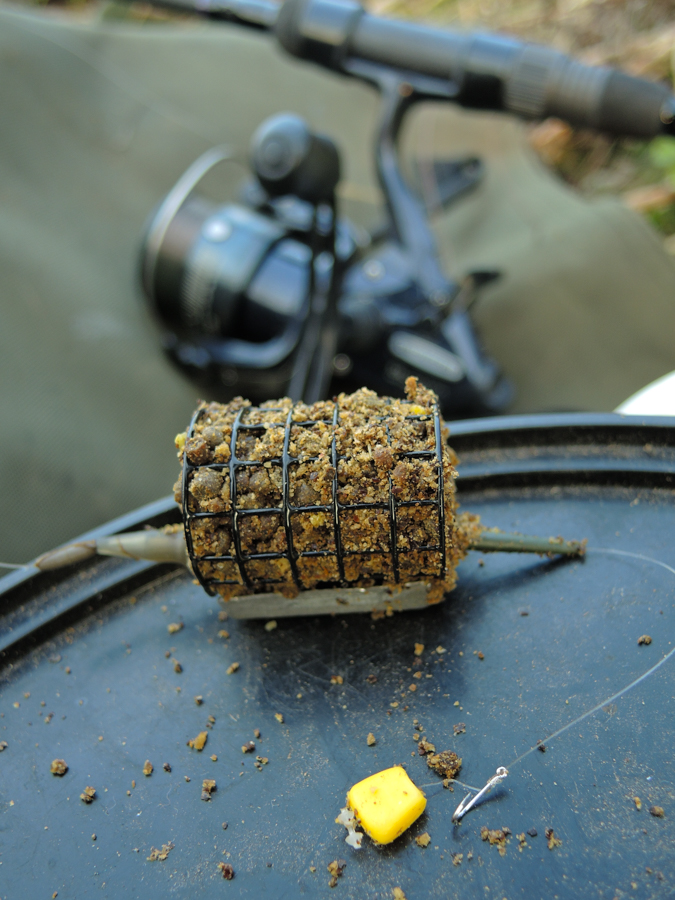 Not having had the roach rods out since this time last year it had been a bit of a struggle to find what I required. The rods were still rigged up but the feeders had gone AWOL. After a bit of rummaging around I scraped together enough to  see me through a session. I even threw in an in-line cage feeder I'd tried once before. That proved to be a good move as when I started to tackle up I found one of the power gum rigs was goosed.

Two rods fished open end feeders filled with crumb and pellet mix with maggots on the size 20 hooks - a single maggot on one, two on the other. These were cast out to a marked spot. The third rod had the in-line feeder, and a small piece of fake corn as bait. This was chucked as far as I could get it and left to its own devices.

The afternoon was warm with little wind. Most pleasant to sit back and soak up some sun between re-filling feeders and recasting. A nice relaxing way to spend some time after the frantic (by my standards!) rod building of the last month.

When the sounder started to bleep I was amazed to see the spool spin briefly on the corn rod before the bobbin dropped back. A liner? I wound the rig in to find the stop above the feeder had slipped. A take. Back out went the rig.

The light breeze, only just enough to ruffle the water, swung through 180 degrees. A dabchick cruised round a bush and crash-dived when it spotted me. Canada geese made a racket. Around four thirty the temperature started to drop. I'd worked up a sweat walking to the swim and had removed my fleece from under the bunny suit before tackling up. It was warm but not warm enough for me to manage without the suit. I was glad to put the fleece back on and replace my baseball cap with the woolly one. Not to mention put on my fleece mitts.

It was ten past five when the sounder warbled again. This time the same spool was spinning steadily. I lifted the rod and felt a fish. Not knowing what to expect I knocked the anti-reverse off just in case it was something verminous. It didn't seem to be. In fact it felt like a roach. No runs just a slowly zig-zagging path back towards me with a few gentle head-shakes. IT felt like a decent roach too. Under the rod tip I had to steer it away from the other two lines to prevent an almighty mess. Been there. Don't want to do that again. When the fish popped up it had a red eye. It's scales weren't large and silvery though. They were tiny and olive green. As soon as the fish saw me it started to fight like a tench should!

Despite waking up it slid into the landing net at the first attempt. Far from a big tench, maybe a couple of pounds (or five to someone who never weighs tench...) at least it had saved a blank. But was it telling me something? Should I get the tench rods out? 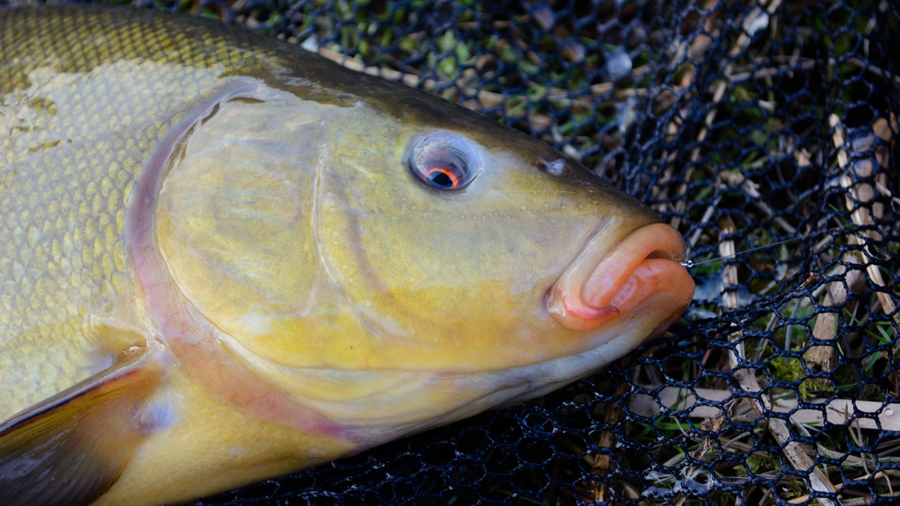 When the light began to fade my hopes of a roach or two rose. It was not to be. The maggot bobbins didn't so much as flicker. My dilemma now is whether to have another roach session (I've bought some more feeders in case) or to break out the tench rods. Decisions, decisions.

Below is my cobbled together video footage. Watch and be bored to tears! The trouble with video is that to do it well you need to shoot a lot of footage, from different viewpoints simultaneously. You also realise you need things like external microphones to improve the sound quality. Then a few filters might come in handy and before you know it you're going fishing in order to make videos!