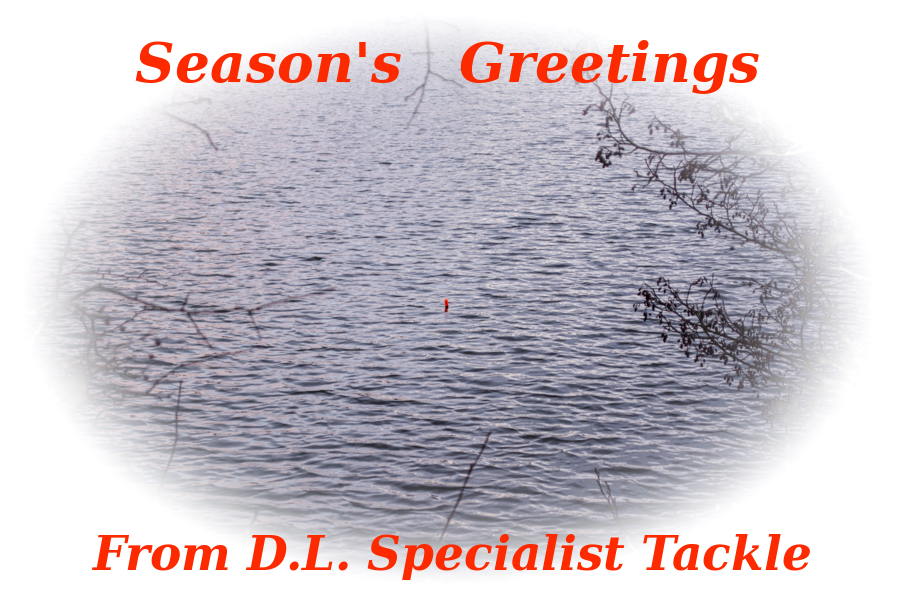 That's that out of the way for another year! In my usual festive spirit I got up, had breakfast, varnished three rods and set them spinning then got the flask, food, bait and gear together to go have an afternoon's piking knowing I'd have the pick of the swims!

It's always a bit of a lottery picking swims when you haven't a clue where the pike are. A mate of mine caught a couple yesterday, so I chose a swim about as far away from where he fished as possible. Even though it's only a few days past the winter solstice the sun is setting noticeably later, so I'd have five and a half hours to move about a bit - without the risk of some other angler being in any swim I fancied.

The wind was light to brisk and not particularly cold despite the clear bright sky putting just enough of a ripple on the water to fuel my confidence. That said the water was clear enough to give me slight misgivings with the sunshine that I was expecting to carry on until dusk. The usual suspects were used as baits on the standard semi-fixed lead float leger rigs. A lamprey head got dropped in the margin to my left, a headless joey mackerel and a herring tail being cast out a little further to be twitched back at intervals.

Maybe it was the sunshine that set the great tits off chinking away in advance of spring. At one time there I could hear at least four of them staking out their territories. The one in the hawthorn close by being particularly insistent and loud, seeming to grow hoarse at one point. I suspect that was actually a change of call, but it did make me think it had given itself a sore throat! 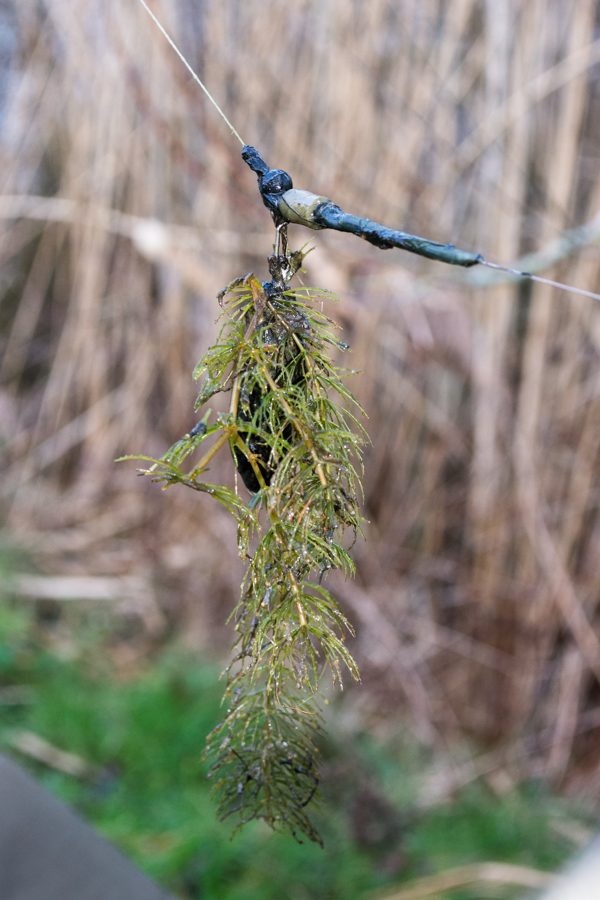 Although we've had a few frosts and some chilly weather there are still a few scraps of lily pad to be found floating in the margins. In the shallower water there's still fresh looking weed attaching itself to the hooks. While I'm all in favour of mild winters enough of a cold snap to kill off the weed wouldn't be too much of a hardship for me to bear.

After an hour I was contemplating a move when the sounder warbled in my pocket and the margin float drifted in closer to the trailing willow branches. Winding down and heaving I felt the line plucking off whatever was below the surface under the bush.

Once more a pike hooked at very close range did nothing more than make slow, wide head-shakes. I'd much prefer it if they would bolt off taking line under pressure to drive the hooks well home. Too many a head-shake has seen the trebles fly free. That wasn't the case this time, although once in the net my forceps were only required to remove the hooks from the mesh. 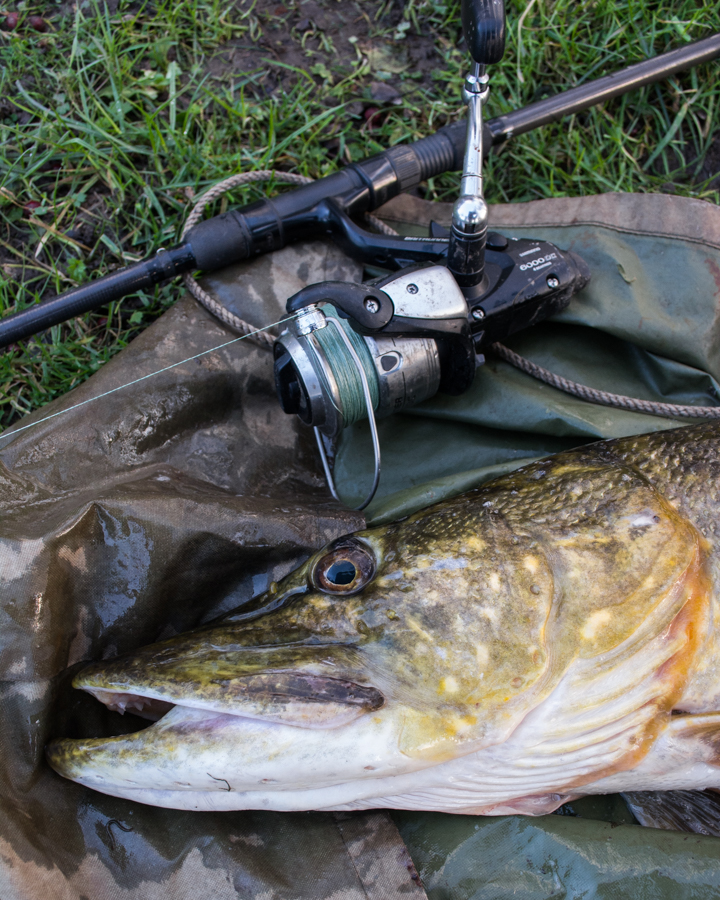 This was a nice clean fish, no signs of mouth damage or missing scales and filling out nicely for the time of year. Quite an orangey-yellow fish too.My guestimate was close after the needle of the Avons had settled at a few ounces over fourteen pounds. Not big enough to bother with a self take. Not even on Christmas Day. The lamprey head was still oozing blood so it got cast out again while I gave the swim another half hour. Then I moved.

After another hour I moved again. There's a swim I've had in mind to end the day on all season but have always got distracted by other choices. Today it seemed like the ideal spot to end the session. The wind had been blowing into that swim all day and at three it had dropped a bit. The sun came out as I packed the gear for the move then there was a Monkey's Wedding as soon as I set off. There wasn't supposed to be rain.

No sooner had I got the baits out in the new swim and the brolly up than the rain stopped. Typical. As it turned out a few more light showers drifted over before dark so the brolly cam in handy. My shemagh also came in handy as a makeshift hat. No sooner had I opened the rucksack up today than I realised my wooly hat was missing. 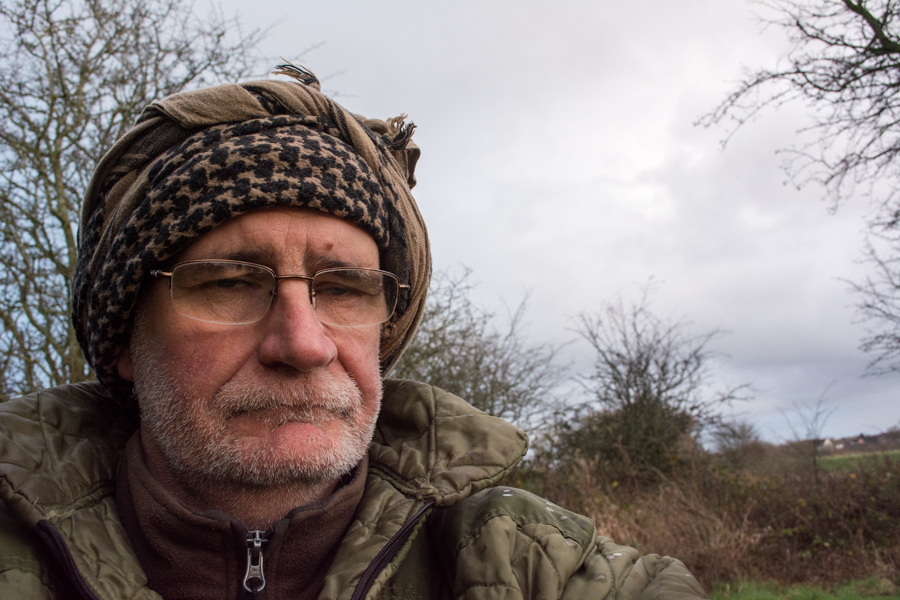 While the sun was out and I was reasonably sheltered my ears were warm enough. However, I knew that when the sun set it would be a different story. That's the trouble with having jug-ears.

A DIY turban might not be the most stylish of headgear, but it sure kept the old lugs toasty. Good job I don't give a toss what I look like so long as I'm warm!

Although I felt sure this last spot would be good for a run by the time the headtorch would required it wasn't. Nothing ventured, nothing gained. I could easily have sat it out in the penultimate swim, which is pretty much a banker for a run or two at last knockings - and something decent had flattened the water within casting range - but I like to try different options when I can rather than tread the same ground. One pike for Christmas was more than I'd hoped for anyway.