It was boredom that sent me out with a lure rod, a handful of lures and a landing net I knew I wouldn't use for an hour last night. The lake looked to be in fine early autumnal fettle. Pads starting to look frayed at the edges and some already dead and drifting. Haws bright red among yellowing leaves. A congregation of mallards in a reed-lined weedy corner. There felt to be a chance of a pike as the sun turned a rosy orange.

Needless to say the lure I clipped on was a Squirrley Burt in perch. It works, so I use it despite it having one eye! The shallows are still too choked with weed and carp anglers' lines to work a surface bait any distance, although there's no doubt there are pike in there. That sent me towards he deeper weed free areas. With plenty of lilies lining the margins it was obvious to chuck the Burt around their edges. In the third swim I tried, only giving it five or ten minutes per spot, the lure got hit by what felt like a rooter. There was a brief jagging and kiting of the lure with no weight behind it. A few more fruitless casts and I was on the move again.

I always have more confidence casting lures into sunlit water, so my hopes rose as I moved out of the shade. It was in a spot with a bit more surface weed, but with enough free water to get longer casts in, that the Burt got hit again. It was another hammer handle that managed to stay attached. So attached that I had to cut one of the trebles before I could return it. 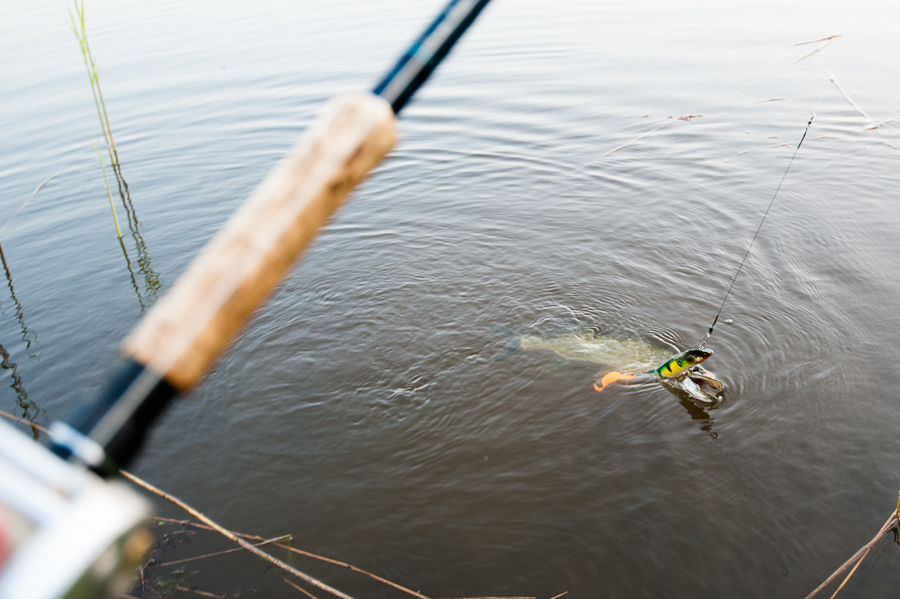 Jacks of this size are all well and good for saving blanks, but they're a pain to unhook. With a finger under one gill plate you run the risk of getting a treble in it there being so little room to work in. With the back hook chopped up and no spares or split ring pliers with me I had to change lure. The only other Burt I had with me was a floater which needed working faster than I liked. I tried a Slippery Sam for a few fasts before clipping on a Funky Chicken spinnerbait until the sun set and the evening chill sent me back to the car. I know there are a lot of pikers who won't get the deadbaits out until there's a frost, but I might give it a go for the first few hours one morning this week. With my luck I'll hook a five pound eel.