Despite promising myself to leave the tench alone until the hawthorn is in bloom those new rods kept giving me the look a dog has when it wants a walk. This became irresistible when I went to the trouble of rigging them up on Saturday. The intention was to fish Sunday morning, but by three I'd made my mind up to take them out - just to iron out any little rig niggles - before a serious session. Which is why I found myself casting an empty feeder around in search of clear spots by five o'clock.

Having just a few hours until dark I didn't bait heavily when I did find some reasonably clear areas. There was a stiff easterly blowing, which was in my favour for catapulting loose feed out in my chosen swim. The open end feeder was cast straight out and a mix of hemp and corn sprinkled over it. The feeder itself containing the same plus a blend of groundbait and pellets. The other rod fished an in-line maggot feeder with my usual tench-starter of two fake casters on the hair. Both rigs had PVA nuggets added to try and keep the baits above the silkweed until the rigs had settled and the bobbins adjusted. 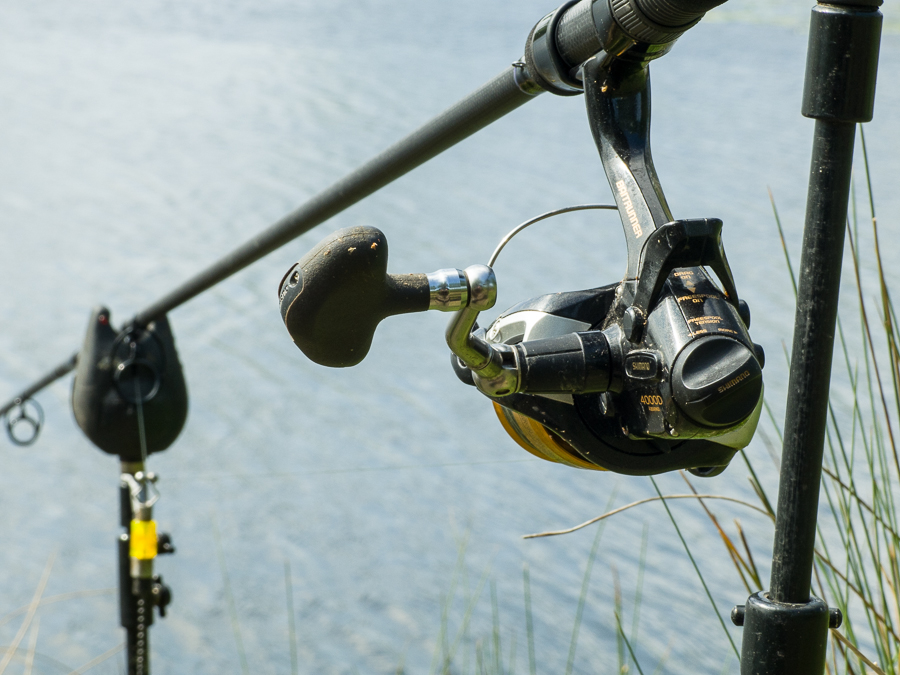 Fishing at such close range was no test for the new rods' casting abilities, but they looked nice on the rests!

A couple of light, and brief, showers blew over. It wasn't exactly warm either. With all the bottom weed I was questioning my sanity. I had intended to rake a patch before setting up but time had got short. The rigs were sometimes coming in festooned in the nasty clingy dark weed. Then I remembered the method I'd used at the Rat Pit when it got carpeted with a rather more appealing clingy weed. I swapped the casters over to three buoyant fake maggots, fished straight up off the feeder on a mono hooklink. It's probably just a confidence thing using clear mono for this presentation rather than my usual Drennan braid. The mono is less tangle prone though. 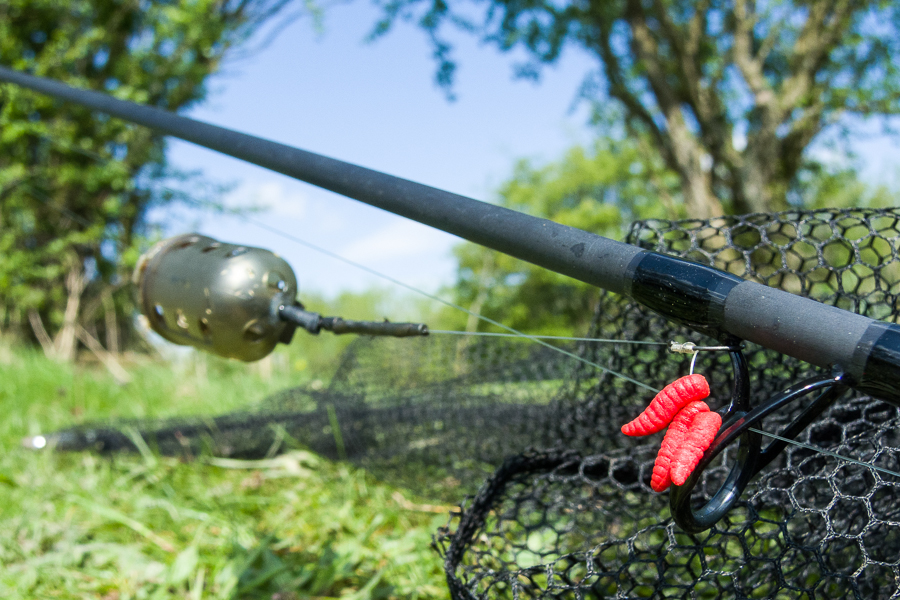 Around eight o'clock bubbles started to appear in the tenchy fashion of random places. I was gaining in confidence. A eight forty, when I was hatching a change of plan for Sunday, the right hand margin rod hooped round and the bobbin danced as the reel grudgingly gave line. For the first few seconds I forgot I was using a new rod and neglected to look at its action as I kept the tench away from the sparse pads. It was obviously a tench from the way it was fighting. Although it didn't feel like a monster it was sending up some confusingly large boils in the water. Safely netted it looked to be around the five pound mark to my out of practice eyes. The scales told me I'd guessed eleven ounces light. Not a bad fish for the region I suppose, but very small looking compared to what I'd become accustomed to further south. 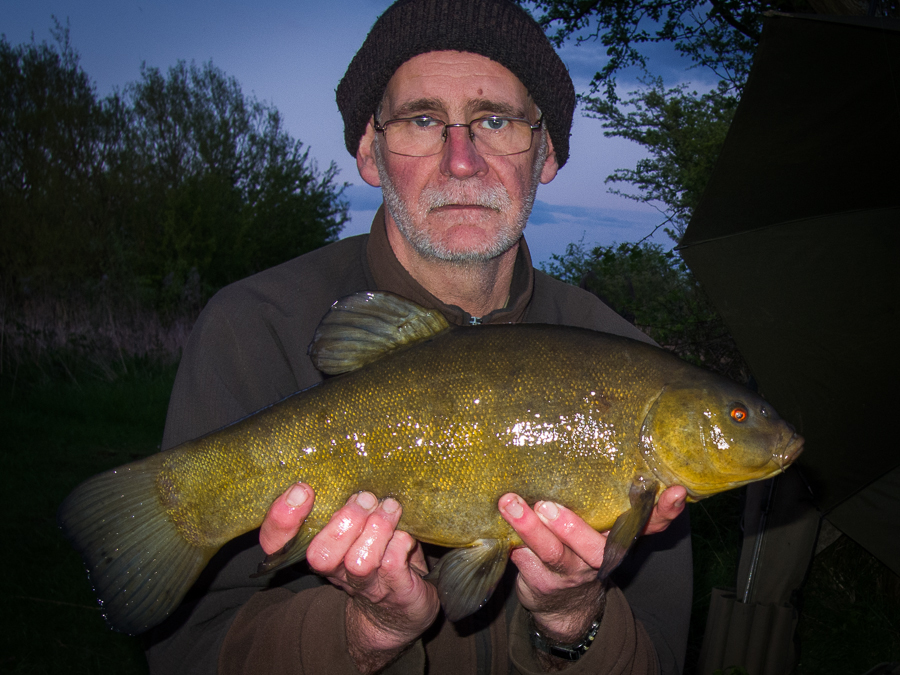 Another angler on the lake offered to take a snap for me, otherwise I'd have taken one of it next to the  scales. A solid fish, not yet filled out with spawn.

It came as no surprise that was my lot for the evening. I was, however, eager to return, the 'new rod jinx' broken..

Before getting my head down for an early night and setting the alarm clock when I got home I had to swap my bite alarms over as both batteries in the ones I'd been using had died and I had no replacements. Then I sorted out some grub and tidied the rucksack.

It was a good job I did all that because the alarm clock let me down. Despite setting it for four it went off at eleven. Nothing I did would make it trustworthy. So I set the alarm on my ancient phone. When I awoke the birds were singing and there was a feint light in the sky. The unreliable clock said it was almost five. I checked my phone and that said the alarm was set for four. Bugger. I could have sworn I'd put the time on my phone forward an hour when BST came in. Up hastily, Sugar Puffs eaten while the kettle boiled for my flask and off out.

I arrived half an hour later than intended. I dropped my gear in the same swim as yesterday because I'd caught from it after seeing tench activity, and because the wind was cold and strong so it would be off my back.Then I got to work with the rake to make a fishable spot at the edge of the pads to my left where I'd seen most of the bubbles as the light faded. 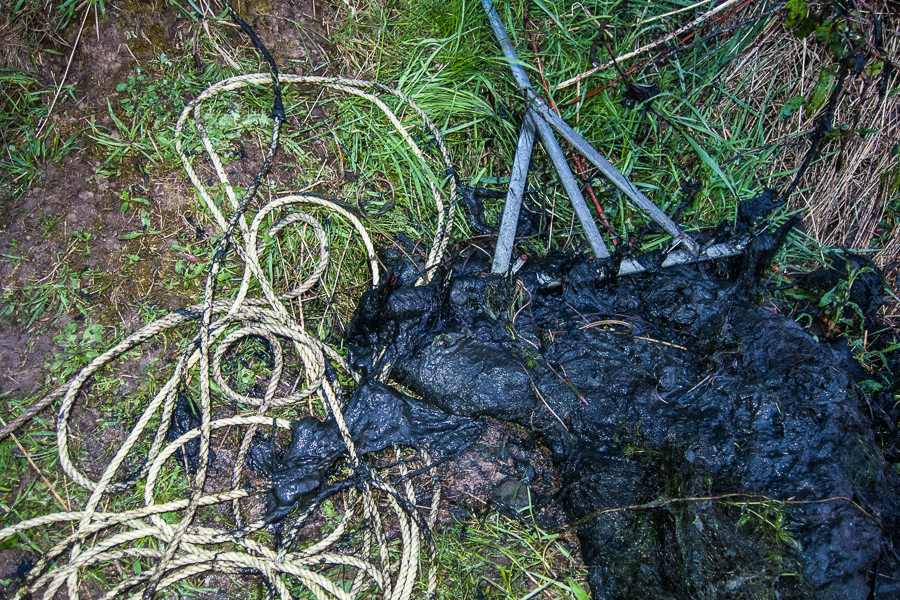 That job done the rods were set up, cast out as previously, and freebies scattered over the baits. Hemp casters and corn just says "tench food" to me. It looks irresistible. Alas it wasn't. 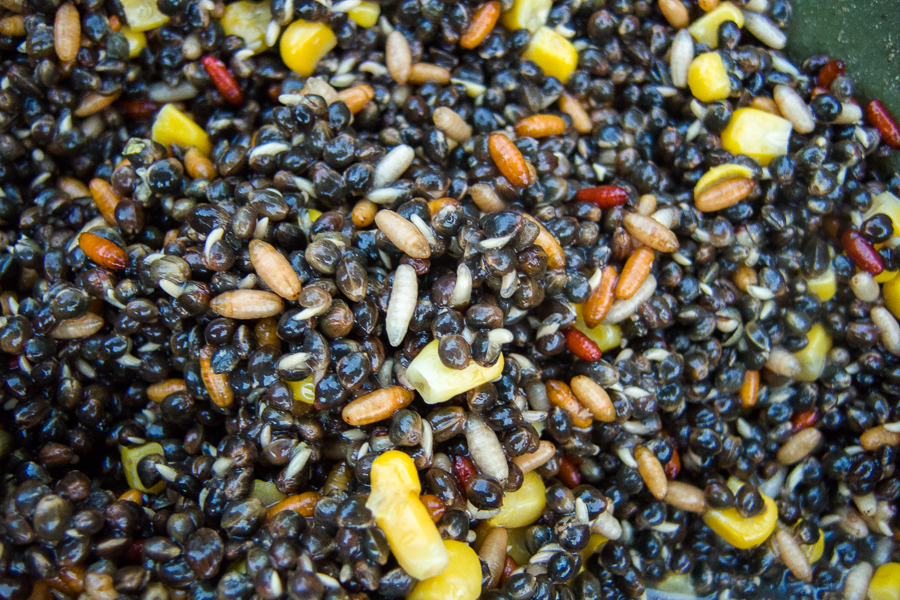 The hawthorn buds are showing hints of white but it'll be a while yet before the bushes are covered in their springtime froth. I saw and heard far more evidence of birds than fish. Chiffchaffs were indulging in their incessant singing, an occasional whitethroat and chaffinch was heard, even a curlew. A lone buzzard flopped its way north only to get mobbed by an equally lone lapwing.

Apart from a couple of liners to the margin rod there was nothing to report by noon. Insufficient bubbling to get the hopes up, and the wind was colder than ever until around nine when the sun got high enough to put out some heat. Out of the wind it had got pleasantly warm by the time I packed up. At least I'd got my weighsling and net dried out, I suppose.