These last few weeks have seen my spare time dwindle, leaving me with just an hour or two of daylight at the end of the day I don't like for piking. And piking is what I've been wanting to do. Even so when a spare morning has rolled around I've either lost the motivation or the weather's been against me. Earlier in the week I made an effort to get my gear sorted so I can go pike fishing without any fuss. Grab the quiver, throw a handful of frozen baits in the rucksack and hit the road. Today I managed to get out of bed while it was still dark and do just that.

The morning was still and cool with  a film of dew on the car, but not ice, and the dew was soaking the grass and reeds as I walked to my swim in the light from my head torch. Passing through a thicket of hawthorn the smell of autumn was in the air.

It having been over a month since my last session things had changed. The lily beds that were starting to decay back then were almost indiscernible. There were just enough clues as to where they were located, and it was on the edge of a couple of them that I dropped my float legered deadbaits. By the time I had both rods sorted out the headtorch was no longer required. I sat down and poured myself a brew.

There was a mizzle in the air. Just enough to make the rucksack damp so I put the brolly up. To be honest I didn't hold out much hope. I was musing on how, unlike feeder fishing which keeps you recasting at regular intervals to relieve the boredom, all you can do when bait fishing for pike is put cast to the right spots and wait. Then I noticed the right hand rod top twitch. The float bobbed slightly, then set off slowly away from the bank.

Unusually for me I was fishing off the baitrunner - which caused me to mess up. Instead of leaving things alone and allowing the pike to carry on taking line from the turning spool while I put the landing net somewhere convenient, I opened the bale arm. In doing this I must have somehow caused the line to tighten or something. The float stopped moving. When I inspected the bait it looked like a half decent pike had picked it up. Never mind. I recast and sat down again doubting the fish would return.

I sat back to watch the world go by and to decide when it would be time for a move. A flock of jackdaws moved noisily overhead, followed by a silent wave of starlings heading rapidly northwards. I thought I heard a fieldfare. Then I saw the right hand float bob again. Again it set off slowly and steadily and I took my cue from it, not rushing. I carefully placed the net to the left of the rod which I picked up and then wound into the pike. The resistance was solid and reasonably heavy. There was no fight to speak of, just one splashy swirl away from the net which didn't require me to concede any line. Seeing there was a flying treble I made sure the fish slid straight over the net in one go.

A quick look at the fish saw me guess around the fifteen pound mark, so I staked the net out (large weave meshes are great for this a bankstick fits through the holes without damaging the mesh) while I sorted out the forceps, weighing kit and camera.

With everything ready the net was lifted ashore and the hook popped quickly from the scissors, Into the sling. Weight confirmed. In front of the camera. Four quick snaps then back in the water where I watched her gradually melt from sight. 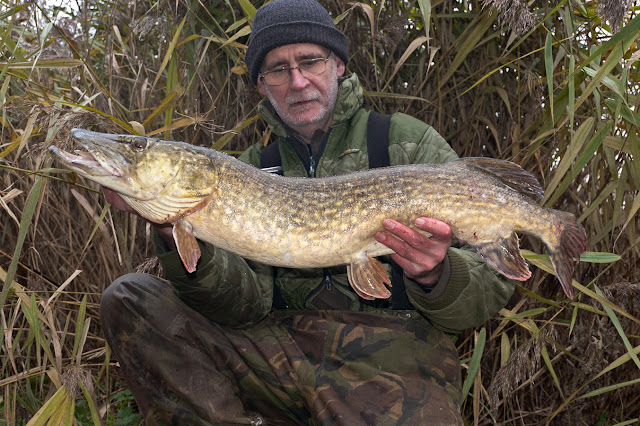 When I got the baits out of the freezer I'd inadvertently picked up a wrong packet. I thought it was a full pack of joeys, but it had been the remains of a mixed 'pike pack' I'd bought to get the one bluey section it had contained. There was just one joey left. I made sure it was tied securely to the trace before casting it out!

I reckoned that two runs, most likely from the same fish, would be my lot for that swim. The mizzle had ceased. It was warming up and the sun threatening to break through the overcast. Half an hour and another brew from the flask later I moved to a nearby swim. The baits once more going close to the last remains of lily beds.

Much to my surprise it wasn't long before the left hand float dipped, rose, fell flat and twitched. Then remained motionless. The bait looked to have been chomped by something small.

Now the sun was almost shining and it was getting warm. However, time was running out along with the tea. The baits were repositioned for the last half hour before my self imposed twelve o'clock deadline.

It had been worth sorting the gear out in readiness. That's the practical side of preparing. Catching a pike is the motivational side of it. Now I might feel like dragging my weary bones out for a few hours every so often. If only I could find an afternoon water...