Now, where was I? 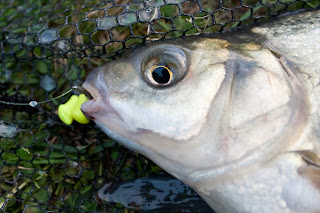 This is the time of year when barbel fishing suits me. If only I could get motivated to give it a go. The trouble is I really like sitting behind three rods on stillwaters these days. Particularly while the weather stays so summerlike. Unfortunately being busy with work and shortening daylight hours makes it difficult to fit in as many sessions as I'd like.

Tuesday saw me doing the carp-style tench/bream thing again. It's not my preferred approach, to fish pellets in conjunction with PVA bags, for tench or bream, but it's one that has been working. Faced with a short session it also makes more sense than trying to build up a swim. It can be a bit hit or miss. Tuesday it was a partial hit with a couple of average size bream landed on a bait I was trying out as an alternative to plastic corn and fishy pellets. Pineapple flavour Sonu Band'ums. They float on their own, but add a hook and they sink. A nice size for tench and bream too. Only time will tell if they are worth using on a regular basis. 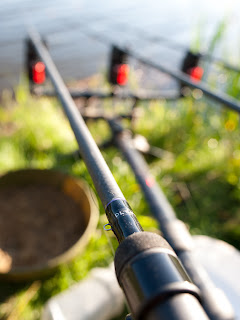 Saturday saw me doing the same thing on a positively hot afternoon. It's most pleasant to be able to sit out for the best part of the day in a t-shirt. Once it gets after five the layers go on more rapidly than through the long evenings of high summer though, and there's a definite autumnal chill as the dew begins to form. There are still loads of dragonflies zipping about while the sun shines though.  Hawkers, of some description, with an odd damsel lingering. The fishing was slow. Dead slow in fact. Maybe I ought to have worked a bit harder at it. When I packed up one raod was missing the pellet. How long it had been baitless is anyone's guess.

Sunday saw me on the bank earlier and targeting roach with determination. I'd prepared my groundbait in advance. A mix of hemp and hali crush, method mix and mostly explosive feeder. Some hemp was decanted into the bucket ready to be mixed with the gorundbait and water added to achieve the light consistency I wanted.

The Chimera Avons were in action, rigged up with 30g feeders. I started out with two maggot feeders to get some grubs out, intending to  switch to groundbait feeders after three or four casts with two rods. The third rod was a sleeper fishing a Band'um down the edge. 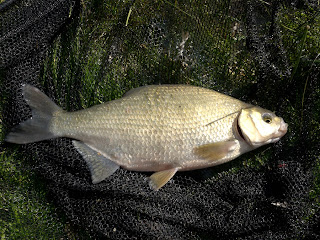 Before I had got the maggots out I had a storming drop-back on one rod and landed what looked like a hybrid - its head and mouth looking more roachy than breamy to me. Not a bad start.

As soon as I picked up one of the Korum cage feeders I realised it had cracked. In fact it had split along its length. The plastic these cage feeders are moulded from feels more brittle than the material used for the standard open end feeders. I could have used the broken feeder without much problem but decided to try a Fox feeder of the same weight, but slightly larger, on one rod and a Korum feeder, with opened up holes, on the other. I was soon catching roach at regular intervals on both rods. All small, though. In the two to six ounce bracket. 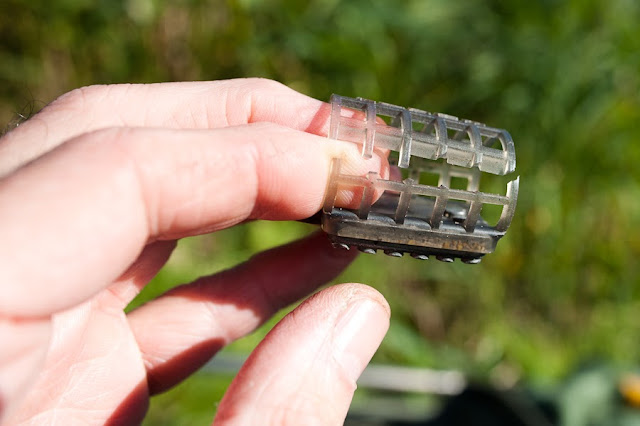 Around four thirty things quietened off for a while. I think I should have been recasting to keep the feed going in because when I realised my mistake the bites picked up again. Around six the roach switched off for good and the next two bites were from bream, only small ones though, and an expected flurry of slabs before dark failed to materialise.

One thing that I will have to rethink about my roach rigs is hooklinks. Even two inch ones are tangle prone when tied with 2lb or 3lb line. I'll give some heavier stuff a go next time. If that doesn't work I'll have to look out for something stiffer. I'm sure the fish won't care.

I ended up having landed twenty fish for my trouble. Which was fun in a keeping busy sort of way, but a bit of an anti-climax in another. I can't seem to find that happy medium between catching nothing or lots of small fish. A handful of biggish fish, or one big fish, per session would be nice. Even if it wasn't every session. At least Fred had a smile on his face as he watched the bobbins dancing! 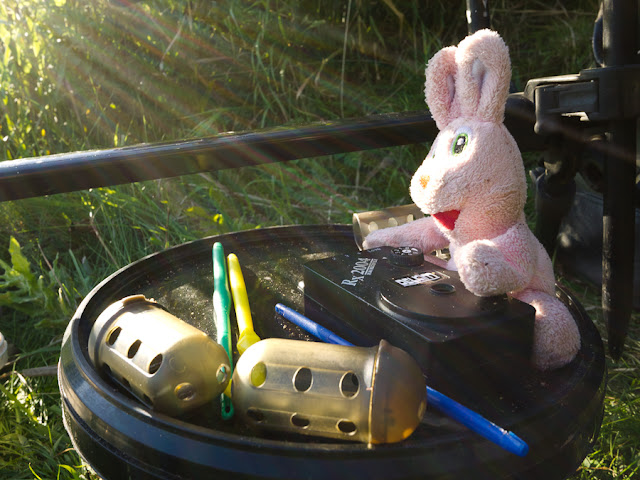