I mentioned in an earlier post that there'd be some product appraisals appearing soon, and here they are. These are only my initial impressions of the gear as a few weeks isn't any way to pass judgement on fishing tackle. It hasn't been unknown to find stuff falls apart or otherwise ceases to function correctly after a season or two, sometimes less.

First up are my new bobbins. Being idle I don't like swapping alarms and indicators between pod and stick set ups in different quivers. As two of the isotopes in my old bobbins were smashed I fancied some which isotopes would actually fit inside rather than being stuck in an external slot. The old lightweight Gardner bobbins I use as drop-offs for eeling are like that and they have been great so far. Fox's relatively new Black Label bobbins looked like they'd fit the bill.

My local tackle emporium only had them in red. Which suited me as I prefer either red or yellow bobbins. Unfortunately when I slipped an isotope in one and looked at it in the dark it was all but invisible. I guess I'll either have to find some brighter isotopes or see if the green bobbins are any clearer. 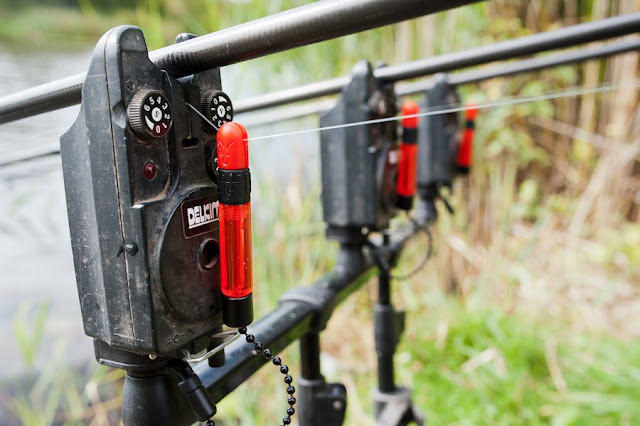 That aside, as they come the bobbins are lightweight. I was hoping that my existing weights would fit them, but while the thread for the clip seems to be standard that for the chain/weights is not. I'll have to get some dedicated weights - which come in packs of two...

The clip option I bought is a fancy new one - which doesn't do anything other clips can't do. I find them better suited to heavier (carp) lines and quite tricky to set light enough for six pound mono. I might swap them out for some old clips when roach time comes around.

The chains are short as supplied, which is fine for fishing as shown above, or on a bit of a drop - which I do if expecting liners that might otherwise move the rig if the line was tight to the reel - but won't do for perch fishing, which being light the bobbins should be good for. Longer chains, and Dacron cords, are available along with other accessories. All part of a modular system - and a marketing strategy! If I was buying again I'd get the cheaper version with an old school clip and longer Dacron cord, putting the money saved towards some weights. Despite the niggles the bobbins work well enough, allowing the line to run freely through the clips to show drop-backs, lifts and runs.

On my non-pike bank sticks I have been using some Maver alarms which, although cheap, have lasted me well through quite a bit of abuse over a few years now. While they have a remote sounder they have two annoying features. The head volume cannot be turned off, and when switched off the settings revert to default - which is high volume. This means that setting up the alarms means either noise, or if the head is switched off more noise when switched back on as the volumes are cycled through - default is not the lowest.

When I saw Wychwood Signature alarms for £19.99, and that they retained settings when switched off, they had to be worth a punt. As the photo shows, they are tiny! 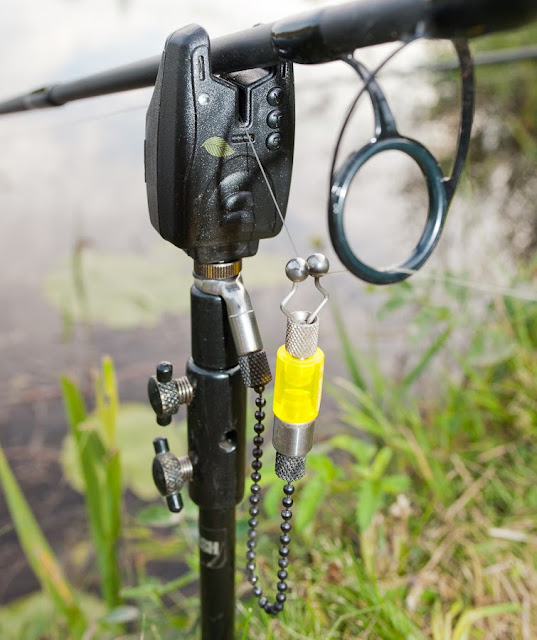 Only a couple of sessions so far, but they've done what they are supposed to and slip easily into the pocket on my quiver. They can be switched to be silent, handy after dark when you can watch for the bright LED lighting up. There's also a jack socket which I'll have to investigate - not having bothered with the boxes for the alarms I don't know how it serves as an output!

Finally, for now, line. When Nash discontinued my favourite mono I was stuck for a replacement for tench/bream fishing in 0.30mm. I spooled up this year with green Fox Warrior XT. It's a bog standard mono, and it's cheap. I've had it on the reels a while now and it's behaving itself. Like all nylons it can spring off the spool now and again, but it's more supple than some I have used (Daiwa Sensor for one) and knots well with my usual four turn Uni-Knot. It's a pity it isn't available in finer diameters as I'd like to use it for roach/perch/chub fishing too. Such is the modern way that these 'specimen' lines are only available in 'carp' breaking strains of 10lb and up. Springy Sensor will have to continue to do for that. Sigh.