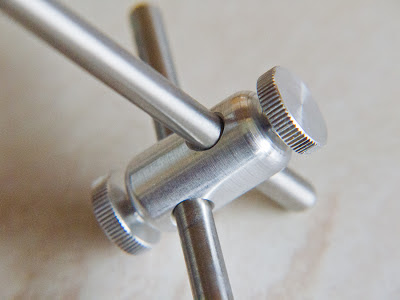 It's a good job I've not been catching anything worth setting the camera up for a self-take recently. I looked in my rucksack the other day to show someone my bulb release bracket and the important bit was missing. Later I searched through the entire rucksack, side pockets and all, and failed to find the missing part. I ordered a new one, opting for the larger bracket this time so I could use a larger camera without too much fiddling around.

The new bracket arrived today and it's better than the old one. Gone are the plastic tops to the adjustment screws, replaced by machined metal ones. I was always fearful the plastic would detach from the thread at a critical time, so was wary of over tightening. These seem more robust. My first job has been to glue a bit of shrink tube to the top of the post to try and prevent the block sliding off and getting lost like the other one did. I ought to get the post top threaded to take a locknut to make a permanent job of it. 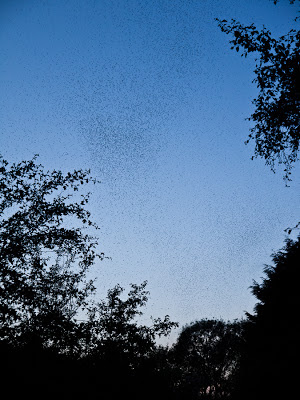 Lacking any worms the other evening I set out to catch eels using some more deadbaits I'd discovered in my freezer. For a bit of variety I legered one and fished the other on a Dyson rig. It was pleasantly warm, with a strongish easterly blowing. A wind that didn't die down at dusk.

The mozzies were out in force for that period when the light fades but the temperature stays high. Ducks and duckling were stretching their necks to catch flies low over the water while swifts were in evidence catching flies high over the water. In a calm patch a shoal of small fish were feeding off the surface. Although mozzies and midges might be a nuisance, they're an essential pat of the food chain.

Well before dark the legered bait was picked up, but another strike failed to connect. Later on the Dyson fished bait got messed with. The bobbin was twicthing, but even pulling the line out of the clip failed to produce a confident run or a hooked fish. Eel frustration continues. I must make an effort to both stock up on deadbaits and go fish another water I've had on my radar for a few years. That's the thing with eels, big ones can turn up in all sorts of places.

Big natural lakes in Cumbria contain them - although wading through the bootlaces to get at them was a problem thirty years ago when I gave it a try. We set up well before daylight and legered worms to catch eels for pike bait. I thought I'd be clever and fish two rods. I couldn't keep two baits in the water the takes were coming that fast and furious! None of the eels broke the pound mark as I remember. On the same water legered half mackerel would get hollowed out by eels without any indication. At other times a decent eel, two pounds or more (much more if you were lucky, which I wasn't), would pick up and engulf a pike bait - treble hooks and all. I can't work out what makes eels finicky at times and suicidal at others.

Reports of big eels from small commercial fisheries are increasingly common as these places mature, and lots of bait goes in. The problems there are avoiding the blasted carp which will eat anything, restrictive rules, and the popularity of the places. Commercials aren't too bad to fish for perch in winter when the t-shirt brigade are hibernating. I doubt I could face them in summer. I wonder if that neglected pond down the road has any eels in it?