Having heard of a few eels being caught accidentally last week I've been contemplating giving my new rods an outing. One evening I almost went but didn't - and avoided a soaking. That was good. This week I had all planned out with a whole Friday free. Until plans went awry and Friday got busy but Thursday was buggered. Out of frustration I put the eel gear together and headed out for an exploratory few hours at Another Lake.

It was another of those spring evening's of slate sky and sunshine. The only downer being the strong and icy north westerly which has been blowing for what seems like a month. My confidence was not high.

At last the plant life is making a show of itself. Marginal reeds and bistort are evident and a few flowers are in bloom.  I've rarely seen so many swallows and house martins in one area. They were skimming the surface of the lake and swooping upwards to chase hapless flies in a swirling circulating mass. There must have been a big hatch on the lake. 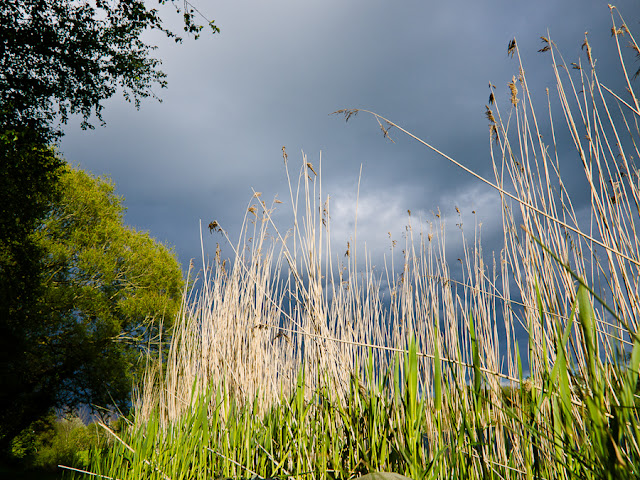 This being a tester session I didn't do much preparation - and I picked a spot based solely on how well sheltered it was from the worst of the wind, and how level the bank was for my chair. One rod was baited with worms and the other a rudd head from last summer which I had dragged out of the freezer. Half a dozen pouches of red maggots were catapulted out and the baits dropped on top of them.Out of laziness and experimentation I set the bobbins high and the baitrunners slack. Getting a take would be a minor miracle given the cold and my idle approach. With everything set I switched the radio in good time for The Archers and cracked open the flask of tea. 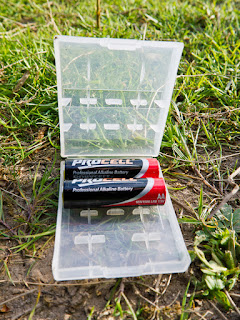 The Archers had not long finished when the radio switched off. The batteries were dead. I've never managed to get much life out of this radio. But it was the only one I could find with long wave reception for listening to Test Match Special. This has lead to me always carrying spare batteries. If you use anything which needs AA batteries replenishing on a regular there are nifty little cases available as per picture on the left. They also take AAA batteries, but they rattle about a bit. I got my case from Battery Logic. I keep the  spare batteries for my Delkims in an old hook box.

When it got too dark for the hirundines to chase flies the insects were persecuted by a horde of bats. This change in light levels was the cue for something to try to make off with the deadbait. My lightening reflexes failed me. The bobbin dropped back on a slack line before I could grab the rod. That was it. Half an hour later I was on my way home still wondering if the rods are any use for catching eels.

When my new reels arrive next week I'll give it another bash - and take some better photos of what should be a sexy looking set up! In the mean time I need to find some easy to catch small fish to stock the freezer with. Maybe get some lobs too.