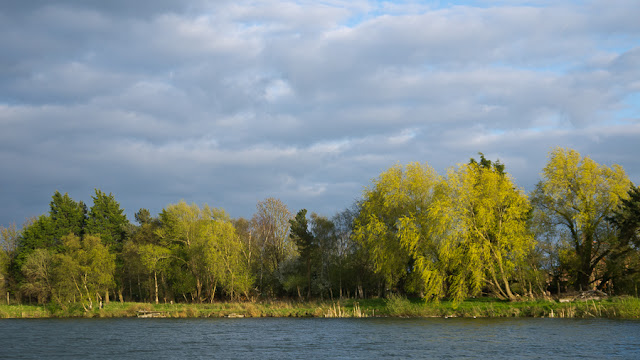 It might be a little late this year but the fresh willow leaves are doing their thing glowing against a  dark spring sky. Couple that with a brisk wind and thoughts turn to tench. So I went roach fishing...

My intentions for the long bank holiday weekend were to start on Friday after boxing off the last job on my list. Applying the final coat of varnish to a couple of butt rings on a pair of handle modifications. Okay, so I'd run out of the disposable brushes I use with more on their way. This isn't usually a problem as the craft shop in the village also stocks them.

First thing Friday morning I walk in the shop and the proprietor knows what I'm after. "A lady from the Cubs came in yesterday and bought all the brushes." Bugger. Not to worry. Poundland had some that would do the job last time I wandered in. Off to town. Did Poundland have any paint brushes? Did it hell. Nor did anywhere else I looked. I headed home to start searching for something usable to apply the varnish. The hunt ended at five o'clock. The day which was to be spent fruitfully had been wasted.

Saturday didn't go much better. The refurbished rod butts were duly collected, and another customer stopped by to pick up his rebuilds, then I headed to the tackle shop to drop off a repair. I was going to go roach fishing in the afternoon but my back was starting to niggle so I thought it best not to irritate it by carrying my gear round the lake. When I got home the post man had delivered the replacement for the lawn mower cable I had managed to mow. My back survived the grass cutting which I finished off. Then I went for a roam with a camera after tea.

Sunday morning and the back was still niggling so I took a walk to see if that would free it up. It seemed to. With cabin fever getting bad I had an early lunch, made some butties and loaded the gear in the car. I reckoned that if I fished a peg near the car park my back might cope. Sure enough I wasn't feeling any discomfort by the time I started to set the gear up. 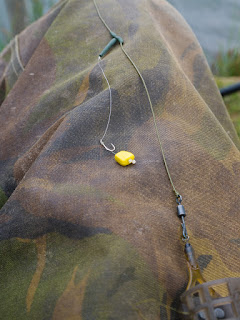 The wind was pretty strong, but not unmanageable. It was chilling, even though I was sheltered by a tree. I set up the two marked rods and cast one out with an open ended feeder filled with my pellet and hemp mix, to which I had added some explosive feeder groundbait, and the other with a maggot feeder. On the third rod I went for a change of tactics and tied up a hair rig with a small grain of slow sinking plastic corn. This was to be the 'sleeper' rod and be cast out just a couple of times.

It was gone four thirty by the time I was settled in and pouring my first brew. With darkness not coming until after nine now I had plenty of time. The only flies in the ointment were the water clarity and weed growth. The water was not quite gin clear, but there was about three feet of visibility. The weed growth wasn't thick, but there was the odd bit of thin, stringy weed on the rigs every now and then. I wasn't disheartened.

Butties eaten and the Korum magazine/catalogue read the radio went on. Fishing the shallower end of the lake it was easy to get the bow out of the line after the rigs had settled, despite the wind which wasn't affecting casting accuracy either. It was quite relaxing fishing. Nothing was happening. With the clear water and bright sun I didn't expet much until later so I was undeterred as I sat breathing in the gentle fragrance of the water mint which was beginning to emerge in the margins.. 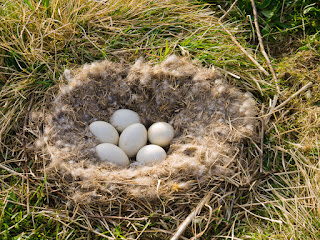 There wasn't much in the way of waterfowl to watch. If the Canada geese are anything to go by I guess most are well into the nesting stage by now. A few swallows were in evidence, and I saw my first swifts of the year, being alerted to their presence by their high pitched screams.

Another bird that drew my attention by its call as it flew overhead was the whimbrel. A flock of six were heading towards the river where I had spotted some for the first time last week on an evening walk looking for warblers. Strange how you see a bird for the first time in your life and then see more in short order. A bit like catching your first big fish can take years then they start to come along more frequently.

The sky clouded over and the wind dropped a little as the evening drew on. Towards sunset the sky then cleared. It was still cooler than it could be and my confidence was ebbing away. Partly it was the feeling of inevitability about the impending blank, partly the feeling that I should be fishing for something else. The other part of my plan for the weekend was a speculative session for the bream in another lake. I just fancy spending an afternoon to dark session with the rods cast on to a heavily baited area waiting for a bobbin to drop slowly to the deck. No frequent recasting as with the roach but a sit and wait approach, chilling out on a bedchair in the sun.

Nine o'clock came around. It was still light. I'd had enough. Not just because the roach weren't playing ball, but because my back had started to ache. I struggled to get the rucksack on my back and limped my way to the car park. It was only about 100 yards or so but it made me wince a time or two.

In the scheme of bad backs I can't say it's awful at all. It's more annoying and uncomfortable. Carrying fishing tackle and driving a car only serve to stop it getting better. So thoughts of heading to distant waters in search of tench or bream have to be shelved. It's too early for me to start eel fishing, and my new eel rods aren't finished yet anyway. So I'm a bit scuppered as to what to do. Maybe I'll have to find somewhere to take a float rod and start stocking up with eel baits. Preferable somewhere I can park behind my swim!