Spring finally seemed to be springing yesterday. The frog spawn in my pond had largely survived the frosts and a multitude of tiny tadpoles were doing their best basking impression in the relative warmth on the gravel shallows. Although I had bought half a pint of maggots and a tub of dendrobenas at the tackle shop I wasn't planning on using them until the weekend. The day was so nice when the sun came out after lunch that I changed my mind and set off for what turned out to be a deserted Goat Lake.

With well over four hours of daylight left I took my time setting up at the shallower end with a couple of cage feeders and a blockend. Two rods went out to the markers on my lines - casting out then winding quickly back so the orange braid was at the tip ring before allowing the rig to settle and tighten up. The third rod went out to the right and fished a worm. This one was left for longer periods between recasts than the other two which were wound in every fifteen minutes or so. My thermometer said the water was over seven degrees, almost eight, and the air temperature was in double figures. The westerly was causing a bit of wind chill though. 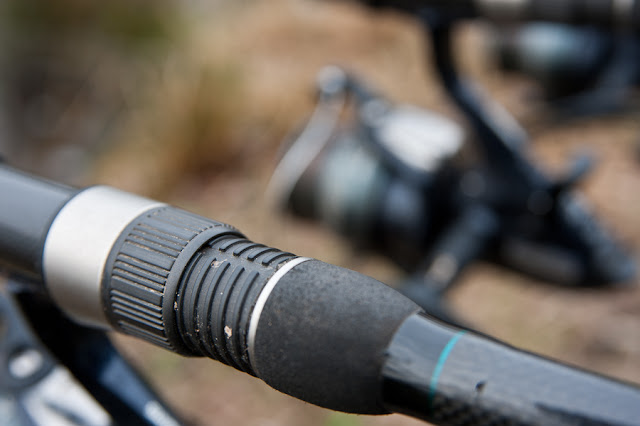 As I'd walked onto the bank I had spotted my first swallow of the year swooping down towards me. Although this apparently lonely bird wasn't going to make a summer it certainly lifted my spirits. Sitting by the rods numbers of them could be seen feeding high in the air and skimming the water. It was starting to feel a lot like spring. The whole place seemed different to how it had during the winter even though there was little in the way of new greenery. Something in the quality of light with the sun higher in the sky, perhaps.

Apart from a couple of single bleeps which would have been caused by drifting weed nothing disturbed me. Not only was the water warmer it was considerably clearer than on my last visit. Past experience suggested that this would mean last knockings could be the time for action.

When the sun began to set, the distant street lights began to glow, and a couple of bats emerged to fly around my swim the wind died down turning the evening warm and inviting me to dust down the bivvy. It was that kind of time when I would have enjoyed watching day turn to night proper while lying on my bedchair with the kettle on the stove expecting an LED on one of the alarms to light up at any minute. That'll have to happen elsewhere though.

While there was still light in the sky the middle LED did indeed light up. The bobbin did nothing though. There wasn't enough wind to have caused the indication so I put it down to a liner. The maggot was untouched when I recast. Half an hour or so later the same alarm signalled a bite. The bobbin lifted, then jiggled down lower and lower. I picked up the rod and felt something roachy. Not heavy, but roachy. I brought it in a few yards than reached down for the net to position it in readiness.  That was when the fish fell off...

I gave it another ten minutes before starting to pack up. By which time there were sparse rain drops glistening in the light from my head torch as I tramped back, defeated once more, to the car. The rain wasn't much and had cleared by the time I got home. Next time, if the day is bright, I'll be leaving it later before starting. It's that last hour that seems to be the one.