A friend of mine had to pick up some rods I'd done some work on for him and we decided that a session trying to track down the mythical canal perch might be in order. This would give me a chance to get an idea about the Texas rig and drop-shot techniques he has scored with elsewhere. There's nothing to beat watching someone using a technique when it comes to understanding how it's done. Knowing Steve's ability for catching big fish I was also expecting to get my arse spanked as he caught huge perch after huge perch with a flukey double figure pike or two for good measure!

Steve set up his drop-shot rig with a tiny little bit of soft plastic on the hook while I clipped on my trusty silver Mepps and away we went. In my first swim it wasn't long before my first retrieve along the reeds was met with that familiar jagging take of a perch. Not a big fish but an encouraging start for both of us. 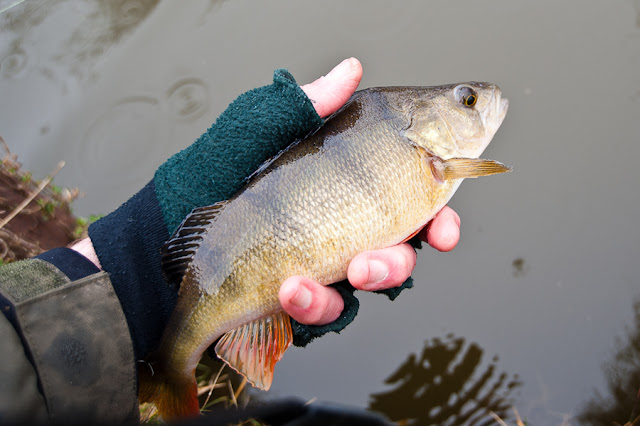 It was a bit of a dismal day. Overcast with a steady heavy drizzle and a cold wind blowing, thankfully on our backs. The canal had cleared from my last trip and had pretty much the exact level of clarity I like for lure fishing there. My hopes of more fish were pretty high.

We worked along the stretch fishing gaps in reeds and to far bank cover. Steve switched to a Texas rigged worm while I sneakily swapped to a small Mann's crankbait. In the second swim with the crankbait a cast to the far bank didn't reach the central channel before I felt head shaking and a heavier weight than the first fish had. Then the fight changed and I realised I wasn't connected to a monster perch but a small pike. The plug had been engulfed by the fish, which might have made a pound and a half, but was easily removed. I don't think the fish was hooked, but had the lure wedged in its mouth!

The rain eased and eventually stopped completely as we covered more water before retracing our steps. All to no avail.

I'm not going to draw any conclusions from this session regarding the merits of the different lures. We both thought that the spinner and crankbait are good for searching for fish, while the soft baits might be better suited for careful presentations when you know for sure perch are present in a swim. I can definitely see how the tiny bait on the drop-shot rig would tempt perch, and the value of the Texas rigged worm for fishing amongst debris strewn swims. So much so I am almost tempted to invest in the necessary kit. Almost!