I must be lucky 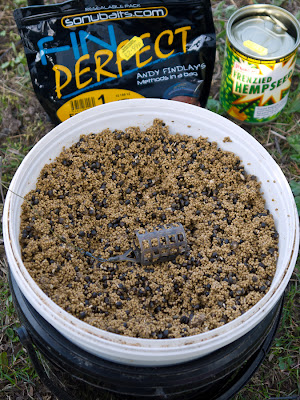 A slight change of tactics was forced on me from yesterday's roach session as the tackle shop had none of my usual micro trout pellets in stock. I don't like the 2mm size for roach as I reckon they are too filling for the little fishies! They don't come out of a blockend feeder as easily either. Not that I was going to be using blockends as I've found the cage feeder filled with hemp and pellet mush, plus some crumb, has been more successful. This might change when the fish start feeding harder. Besides, I was running low on maggots. The smallest pellets available were the Sonu 1mm feed pellets. So I bought some along with a tin of hemp. In small quantities tinned hemp works out about the same as uncooked seeds,  saves the hassle of cooking and can be left indefinitely in the car for emergency baiting.

There was a stiff wind blowing yet again from the west, but only one car in the car park on the warm and sunny afternoon. A chiffchaff was singing away in one of the trees and I did away with my fleece for the walk to the swim. The same swim as last time on the basis that there had been at least one fish in the area on Friday.

I had the wind blowing slightly off my left shoulder but was still a bit chilled by it as I set up. Then I sat down and started casting feeders out with unbaited hooks. There was plenty of time and that way I could get some feed out quickly and recast less frequently when I started fishing. After bumping the only fish of the last session off I changed two of the hooklinks to shorter ones. One was a lot shorter. The third had a larger hook attached to fish a worm.

Settled in and baited up I cast out two rigs baited with single red maggots and one with a dendrobena and sat back with a brew. It was only a few minutes before the middle alarm bleeped at four o'clock. I felt confident it was a bite. That was the cue for the other angler to appear dragging his trolley behind him.

Apparently my early bite was more than he'd had since lunch time, and another bloke had been on all morning fishing two rods without a touch. Then the drivel started. The reason he'd blanked was that all the fish had been netted out. I told him I had caught fish before. He said I must have been lucky. I said it hadn't been easy, and that there had been cormorants on the lake. He reckoned they couldn't remove enough fish to spoil the fishing. I bit my lip and wished he'd bugger off. Eventually he did, saying he wouldn't be coming back. The lake is maybe a couple of acres, no deeper than 18 feet and the water goes clear. Undisturbed half a dozen cormorants could make serious inroads into the fish stocks. The bloke was clearly an old school, pie eating, idiot.

An hour later I had a bite to the worm rod. Just a jiggle, but definitely a bite. As usual I was expecting the action to come towards dusk, so it was a surprise when I got a positive indication on the left hand maggot rod just before half past six with the sky still bright and blue. This felt like a roach and a decent one at that. Sure enough it was. Unlike all the fish I had caught during the winter this one looked battered when I netted it. Inspecting it while removing the hook it was in a sorry state, showing what I take to be signs of cormorant damage on both flanks. 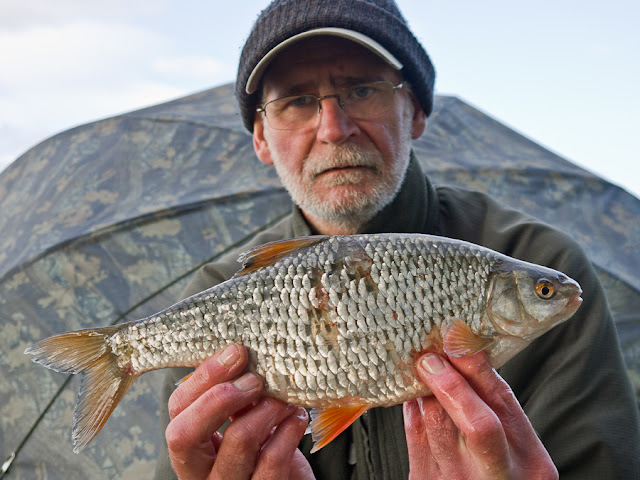 Half an hour after slipping that fish into the keepnet the worm road roared into life. Alarm screaming, baitrunner spinning and the rod arcing round. I knew what the culprit was before I picked the rod up. A trout as intelligent as my earlier visitor. I wondered if it was the same idiot fish I had caught twice in a day earlier in the year, but it was a fair bit bigger. It went back.


While unhooking the trout I had managed to cut the hook off the hooklink,and not wanting to catch another I left the rod propped up against the brolly I had erected to keep the wind off me. I'd had to move the brolly round a bit as the wind was swinging to the south. This suited me as it was blowing more directly off my back. 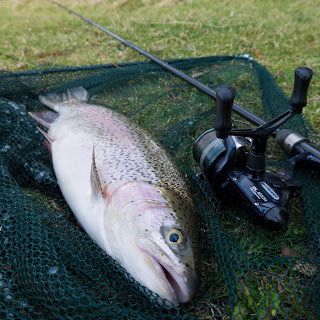 Five minutes later I had a bite to the left hand rod and landed a mint conditioned roach of maybe ten or twelve ounces. No sooner had I netted this fish than I had a run to the remaining rod. Not a trouty screamer, but a more gentle affair. This was caused by a hybrid picking up the maggot. If it had been a roach it would probably have been a PB, but I didn't bother weighing it.

Both rods were rebaited and recast and a short hooklink with a size 18 attached to the former worm rig. If the fish were feeding I might as well milk it! Ten minutes later I had another gentle run which resulted in another pound plus roach. Like the other one and the hybrid it showed signs of a cormorant attack.

The feeding frenzy didn't continue into dark. Half an hour after the roach another hybrid was hooked. One which kited over my middle line. One advantage of The Rig is that the line can be cut without messing the rig up, making retackling a simple case of retying one knot. So that was what I did. The other rod was wound in and recast, the cut line retied, and I was back in business with minimal fuss.

The sky had clouded over and dusk came early. The barn owl hunted the far bank as the street lights came on. A rain shower blew in and when it passed I packed up. I couldn't believe how lucky I had been to catch all those fish from an empty lake. 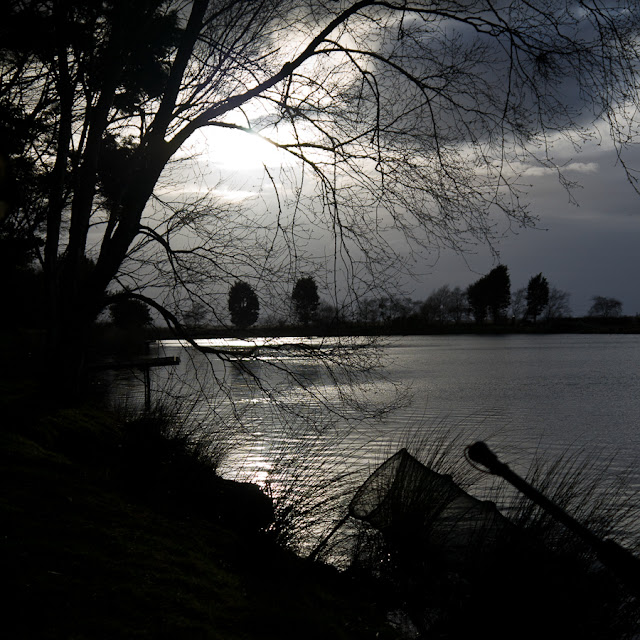 The walk back to the car got me sweating  in the sheltered warm air. The air temperature had been 17 on arrival and was still 13 when I set off for home. The lake had warmed up to over nine degrees too.

The cormorant damage is a worry. The larger fish that I am after must be too big for the vile birds, but they will be thinning out the smaller fish. With the daylight hours increasing they will have more time on the lake to feed before the majority (of the few fishing the place) turn up around nine or ten o'clock. At least during the winter months the cormorants have less time to feed. With a nearby nature reserve hosting a roost of over 60 of the fish eating fiends local fisheries are going to come under more and more avian predation once the birds have cleared out the waters on the reserve.

Undeterred I shall continue chasing these roach for a while longer. Although they seem to be topping out around the pound and a half mark there might just be one or two larger ones swimming around. That's if I'm lucky.
Posted by Dave Lumb at 9:34 am