When there's nothing happening anglers often get their camera out and start taking snaps of their rods. I know I do. The trouble is there's only so much that you can do to make pictures of rods even vaguely interesting! One is to incorporate the rods in a photo that is more a landscape picture. In the example below it was the sunset which was more worth photographing that the rods.

Given a situation like this it is worth using flash (as described in Part 1) so that the sky is well exposed but the foreground isn't a dark mess with no detail. 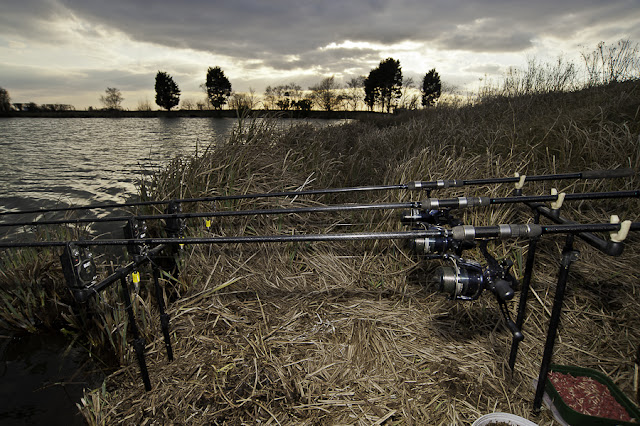 Even so it is worth learning a bit about using software to enhance your photographs. I'm no expert in this department, but so long as you work on a copy of the original image you can do no harm by messing about. It really can give your pictures more impact. 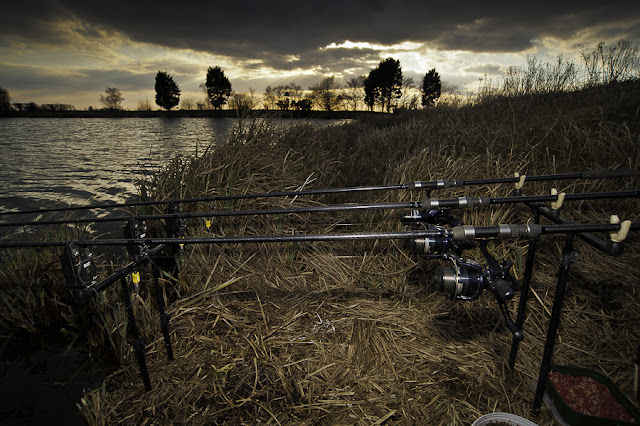 Nice enough as this picture is there's not much going on in it. Being human we respond more strongly to pictures containing people. As nothing was happening on the day this photo was taken I messed around taking some staged self portraits. Again I used flash as the sky behind me was bright.

The equipment for taking self portraits is described elsewhere on this blog, a wireless remote to fire the shutter helps for the sort of pictures that follow, but a bulb release can be used if the tube is concealed or kept out of the frame. I must admit that a camera with a flip out screen makes the process a lot easier, but a bit of trial and error will work okay. It just takes longer. The following photos were all taken without being able to see the screen. 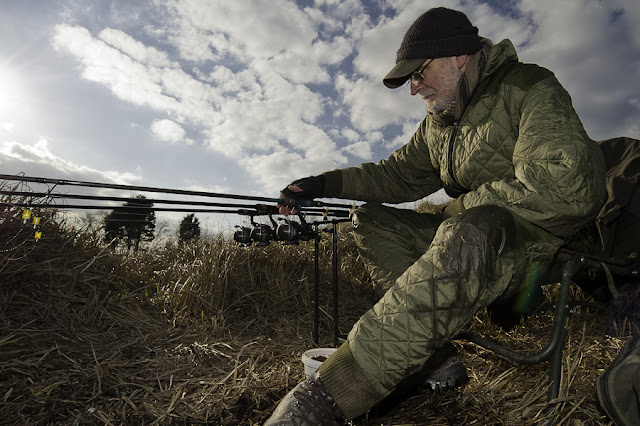 This is a reasonable enough pic but it's a bit boring and doesn't include enough information. The groundbait bowl is hardly visible, there are no alarms in shot and the overall composition is dull. There is also some nasty lens flare (the bright green bar by my knee) caused buy the sun being just about in the frame. Some lenses are more prone to flare than others, and this one is particularly bad. 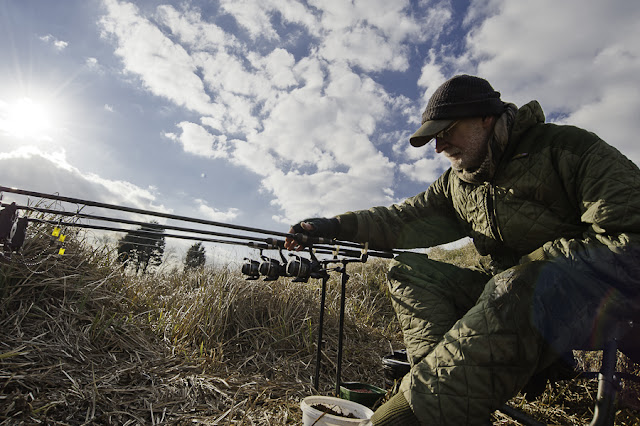 Here the lower camera angle and slight, albeit unintentional, tilt to the camera coupled with my leaning forward pose adds a sense of movement to the picture. I am trying to pretend a bite is about to be struck! The alarms are in the shot along with the groundbait bowl and maggot tub. These all help to tell the story of how I am fishing. In all these pictures the clouds and sun add atmosphere and the clothing and dry reeds hint at the time of year and weather conditions.

There is even more flare in this shot, including a small blob in the sky. That blob can easily be cloned out, but the coloured flare is more difficult to remove. One simple way to make flare like this less obvious is to convert the picture to black and white. 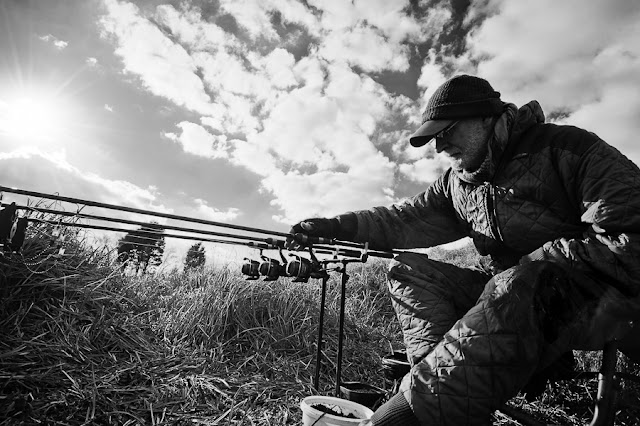 Flare isn't always a bad thing. It can make an image look lively, but only when it isn't intrusive. There is some flare in the next picture, but there is so much else that works well it doesn't bother me. My pose could have been a little more animated, and my hand a little higher over the rod, but the story telling details are included, and the composition comes together well with the lucky break of the rays radiating from the sun and the shapes of the clouds. If you want to deliberately induce sunstars you have to stop the lens's aperture right down, to something like f18 or f22, the smaller the better. Even so, not all lenses will make a good job of it. There is a technical reason for that, but I'm blowed if I can remember what it is... 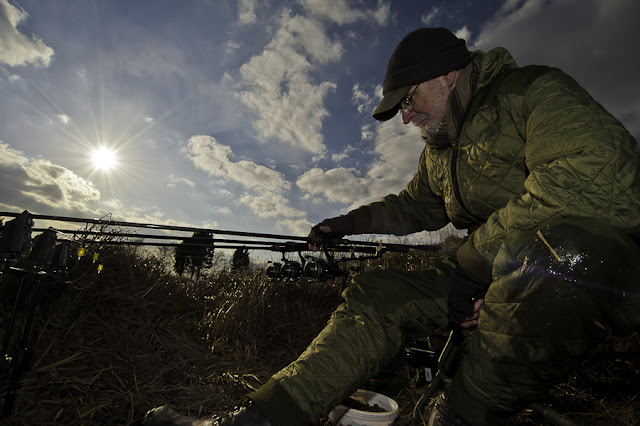 While I had to use myself as the model for these photos the same ideas about composition and details can be applied to photographing your fishing buddies. Either in staged scenarios like these or when they are actually doing things like striking, playing fish or whatever.

You can also get in closer for more of a portrait feel to such pictures. Don't be afraid to crop off bits of someone's body to make the picture work. There's no need to get everything in the frame. That often leads to wasted space. The same can go for trophy shots, but in that case it's wise to get all of the fish in the frame even if you slice the top of the captors hat off! Unless you are going for a detailed close up of it's head, say.

I apologise for the gormless expression, but I'm sure you get the idea! 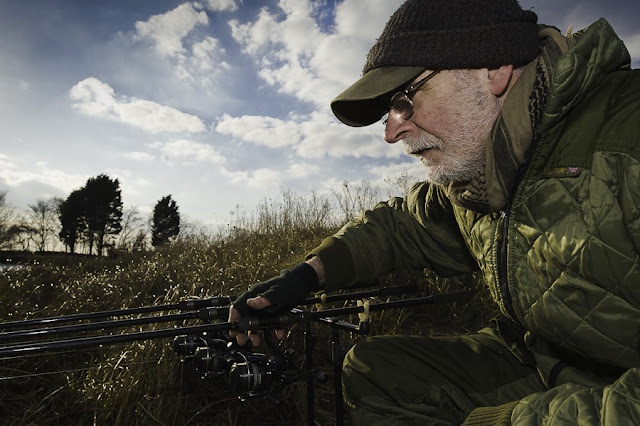 For the technically minded the set up was pretty simple. The lens used was a wide angle zoom because the swim was cramped and such lenses exaggerate perspective to produce dramatic images. They also have a large depth of focus which can help in this sort of situation.

The cameras settings were dead simple. It was in Programme mode and set to chose its own focus point. With the the bright light making a small aperture inevitable and lens's depth of focus that meant that the camera would focus on the closest thing and pretty much everything else would be sharp enough to appear detailed.

The only technicalities were to override the Programme metering to underexpose by about 1/3 of a stop for some shots. This was to make the sky expose well and not burn out to white and lose all the cloud detail. The flash (I used a flash gun, but the camera's built in flash would have done almost as good a job) was set to work things out for itself too, but again with a slight nudge to boost output. Then I stuck the camera on the tripod, pointed it in roughly the right direction and started taking photos.

Take one frame then check it out for composition and exposure. Make any corrections and try again. Repeat until bored. It's something to do when the fishing is slow!