I'm getting a bit sick of Fred the Barbel Bunny acting more like a jinx than a mascot. Here he is scaring away the roach. 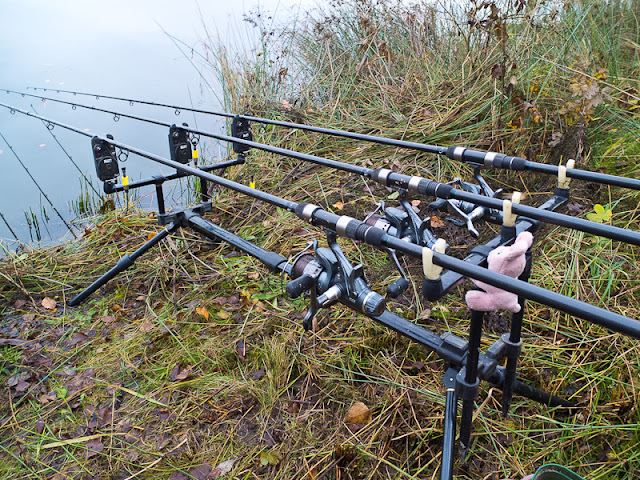 This might be the penultimate time the Tica reels get an outing. They were only cheap and looking back it seems I've had them for four years. At the time I bought them the options for small, as opposed to small-spool, baitrunners was limited. Now Shimano have them in a range of pricepoints I've ordered up three of the 4000 size DL-FAs. The same size as my 4000Ds, but cheaper! They should make good replacements for the Ticas. Pity they come with double handles, but I'm sure I'll manage.

Yesterday's afternoon session was biteless. I tried casters in the feeders along with the maggots, and one rod fished a caster on the hook. The worm rod was switched to a running rig (with the bobbin on a drop) and remained as unmolested as the other two. Not a sniff despite recasting both maggot rods every fifteen minutes without fail and sitting it out until ten to five to pack away in the dark. The only action was untangling the worm rig after the worm had crawled into the feeder through one of the holes in the side and back out through one in the lid.

There was one bloke fishing the pole when I arrived who had caught a few fish in the previous hour and bumped one off while I was talking to him. He didn't catch anything while I was there. Fred seems able to jinx everyone! Nonetheless I enjoyed the session. It was dry and almost windless, a goldeneye approach within 20 yards as dusk slowly closed in, which was a nice encounter.

As I sit here at four thirty wit the rain pouring down outside and the electric light burning it's difficult to imagine that 24 hours ago it was still light. That's always the way when you're outside and the sky is clear. It is much brighter out than in. Another month of shortening days to come until the days begin to lengthen and lift my spirits. Another month of fishing for roach, perhaps. I think I can face another couple of blanks before trying something and somewhere else. When those reels turn up I'll feel obliged to stick at it even longer.