My new reels should have got an outing on Sunday, but life got in the way. They weren't going to get used today because I had stuff to do. But the sun was shining and the forecast was for frost, frost and more frost. The stuff could wait. 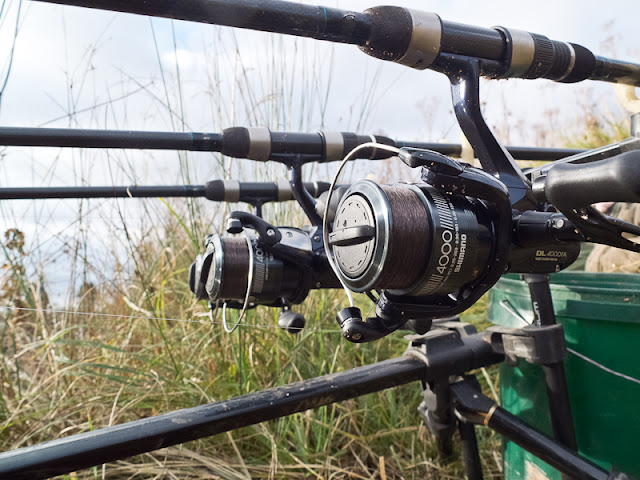 As I'm still finding my way on the roach water I opted to fish a different swim in a different, shallower area this afternoon. With freshly loaded line on the new reels my first task on setting up was to pick a spot to cast to and mark the lines to ensure accurate recasting so the feed keeps going in the same area. You can buy special 'marker braid' on small spools for silly money or a lifetimes supply of fluorescent braided fly-line backing for not much more. I wonder if they are the same thing? 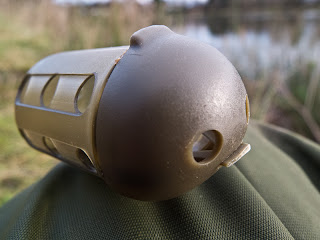 With one rod cast out and marked I chucked the feeder along the bank and set the second rod alongside it to get that line marked at the same distance. The third, worm, rod I wouldn't mark as it would be fishing around the swim.

Winding one of the feeders back along the bank the line suddenly went slack and the feeder dropped off. I assumed it had popped off the clip at the end of the rig. Turned out the damned thing had snapped. It'll make an in-line feeder. In order to cut the weight of my rucksack down I had not only removed my big camera, I'd also left out the bag of feeders. Not being completely stupid I had put a couple of spares in a side pocket of teh rucky! 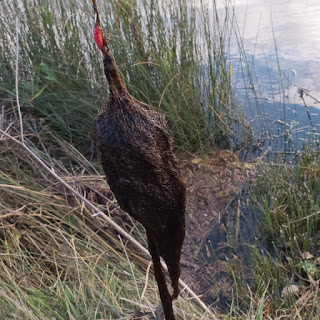 Rigs baited and cast out I began the process of recasting frequently. This revealed that the bottom in the shallower water was still covered in weed. That coarse 'pubic hair' weed that masks everything.

In order to keep things as clear as possible I adopted my usual strategy for fishing in weed. Cast to the marker, close the bale arm and put the rod in the rests straight away. Let the feeder sink on a tight line and clip on the bobbin to take out the slack. Then take up the slack carefully, sometimes by turning the spool against the baitrunner so as not to move the rig. It worked. Most times. And when the feeder didn't come back clean there was a chance I'd dragged it into the weed on the retrieve.

The westerly wind had some north in it and was chilly. Good job I decided to fish with it off my back and down a steep bank or I might not have stuck at it until quarter to five with the full moon rising.

The roach weren't playing. Again. One more session and I might leave the place alone until spring. I'll certainly be going doing something else if I blank next time out. Then again, if the cold spell does materialise it might force the fish to move deep and make location a bit easier. It'll certainly make me feel like staying indoors!

The new reels behaved themselves. As I expected. After all, they're just a cheaper version of the 4000Ds I have. The only thing I'm not keen on is the daft double handles. I hate double handles on fixed spool reels for one thing. For another the grips are both small and slippy (when wet).

Driving home I wondered if it was a coincidence that the two sessions when I caught were the ones when I had baited up with hemp and pellets using a spod, and the two resounding blanks were the ones when I'd only fed maggots (and  casters) via the feeders. Next time I might revert to the spod.