There are two days in the autumn when I can guarantee the sun will shine. The Saturday of the PAC show and the Sunday of the Tackle and Guns trade show. After a foggy start the sun began to burn through today, and true to form it was a glorious, if chilly, autumnal day today as I drove to Stoneleigh. On my way to the motorway I had to stop off to get a snap of the mist dissipating. 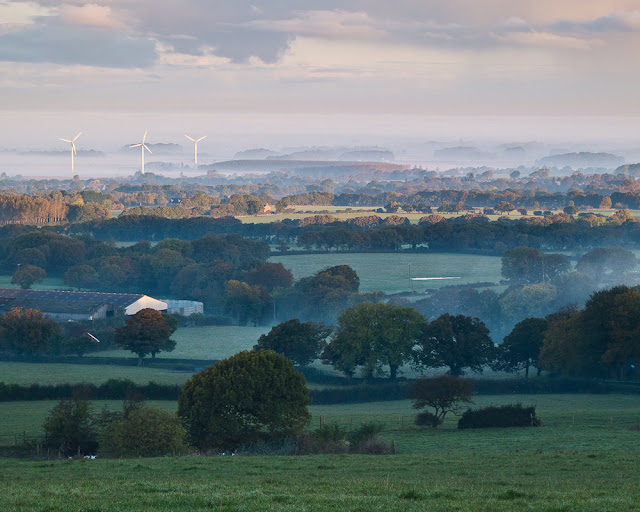 As the years go by there's less and less to excite me in the way of tackle, but it's one of those events where I meet people I haven't seen since last year - or last Thursday in a few cases!

There always seems to be something in the car park to amuse me. I saw no daft number plates this time, but this motor stuck out like a sore thumb today. Which is kinda ironic. 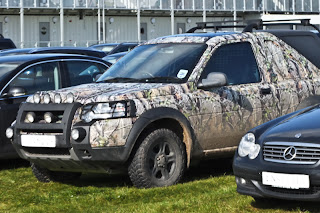 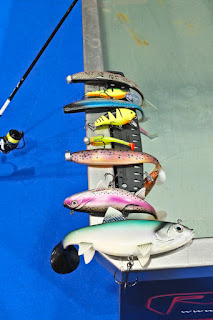 Last year one guy distributing some soft plastics had a demo pool set up which attracted some attention. This year Fox had one too, in which Dietmar Isaiasch was giving the Rage lures a hard sell. Thir range of lure rods was pretty big, most of them being for fixed spool use with smallish lures. Obviously the European lure market is what they have their sights set on.

I spotted a couple more high quality soft plastic lure brands being promoted, but the stands didn't look too busy. I'm sure most of this stuff is going to be sought out by sea anglers. Only the dedicated lure-only angler is likely to give them a go in freshwater. Snowbee had some nice looking soft baits, sort of sluggy/sandeely things. As I've made a contact and might be having a crack at some Welsh bass with him some time I'll be keeping an eye out for this kind of thing. The hooks for rigging them are becoming more widely available these days.

The biggest laugh I had was a new bedchair on the Nash stand. With its long legs making it stand as tall as a proper bed it would be perfect for my mate, Geoff, who claims not to be scared of rats but always has his bedchair legs extended as high as he can get them!

The biggest shock was the new Eagle Claw  Lazer TroKar trebles. They look really nice. But at £4.45 for two I can't see many pikers buying them for bait fishing! Or for lure replacement hooks either.

Shimano have a lighter version of the Baitrunner D series which I liked the look of. Three 6000s might be finding their way onto some of my pike rods in due course. Apart from some dinky bobbins on the Korum stand nothing else gave me GAS*.

After three hours I'd been round the show three or four times and had had enough. I'm glad I don't have to spend a whole two days on a stand there trying to sell stuff to tackle dealers. It would drive me nuts.