Yesterday morning I left a handle to set and went for a stroll along a part of the canal I haven't fished for many years. The sun had gone in when I set off so the fleece was required. By the time I had gone as far as I felt like going the fleece had to be removed. It was a glorious June morning. The air was still, the canal calm and fish were basking. Small roach were cruising about slowly just under the surface and every now and then I'd disturb something larger from the margins where the lily pads are starting to reach the surface. 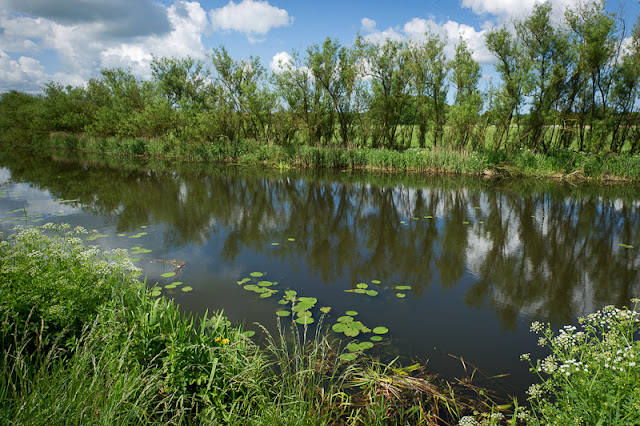 One of these margin baskers revealed itself. To my great surprise it was a koi carp of around five pounds. I've been convinced that there are carp in this canal for quite a while. I've seen swirls and other surface activity which has been ever so carpy over the years, and as they have been in the main canal for a long time there's no reason why some couldn't have found their way through the locks. One koi isn't proof positive, but it makes me think there might well be more.

I retraced my steps, checking out likely eel swims and watching the wildlife. There were a few damsels brought out of hiding by the sun. Not very active as they were still warming up after the cool overnight rain. Common blues and blue-tailed. Passing through an overgrown part of the path with ash and alder on either side I first heard then spotted a female blackcap. A couple of buzzards had been soaring on high earlier on. With sunshine, blue skies and fluffy clouds I couldn't wait for evening to get the eel rods out again. 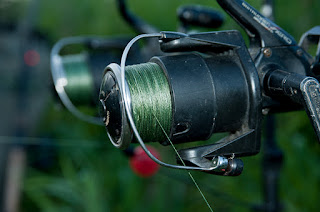 Back home the glue had set so the rings where whipped on before lunch, and the first coat of varnish applied after I had eaten. Then it was time to sort the gear out again and re-rig the eel rods. The decision had been made to go with braid this time. I'd also been browsing eel rigs on the internet and come up with an idea.

There isn't much info about eel fishing to be found. Only a few rigs seem to get used, and they all seem to involve far too much clutter. Rather like a lot of carp anglers, eel fishers seem to spend a lot of time not catching anything. They use this time to think up new ways to incorporate as much junk into their rigs as possible!

Although I have always disliked the Dyson rig for pike fishing it gets good press from eel anglers. I could see it's value for fishing later in the season when the bottom weed gets thicker. Rather than thinking of it as a paternoster variant, I now look at it as an off-bottom leger rig. Looking at one of the rig diagrams I found gave me another idea though. 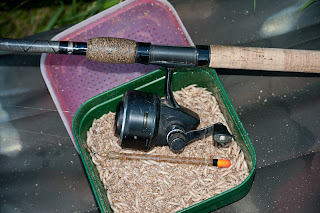 The evening was starting to cool when I arrived at my chosen swim. The float rod was set up. Quickly done thanks to it being a two piece carp waggler rod I keep rigged with my trusty old Abu 501.

A few casts close in over some maggots produced nothing, but the first chuck across, tight to the reeds, saw the float bob and dip then slide away. The first baiter was swung to hand and popped in the landing net serving as a keepnet.

It didn't take me long to add three more so I put the float rod away and got out the eel rods at half eight. One fished a roach head and was cast across to where the water starts to deepen. The second rod put my new idea into practice.

The lead was removed from the run ring and tied to a length of nylon about two and a half feet long. A loop was tied in the other end of this link and clipped to the run ring. This rig was baited with a single lob worm. My thinking is that I can now cast the lead into the far bank reeds (where they are quite sparse) without fear of the hook snagging a stem while presenting a bait close to the outer edge of the reeds. Obviously I'll not be casting the lead deep into the reeds, but if I do overcast slightly I can easily pull it towards me, again without fear of the hook catching. I didn't find out if the plan was successful.

An hour after casting the eel baits out a mist began to form over the canal. Dew was condensing on the rods and banksticks. It was getting chilly and damp. I was glad I'd put my waterproof overtrousers on and remembered my woolly hat. Jackdaws croaked their way to roost in loose flocks. Sedge warblers sang their evening song accompanied by blackbirds staking out their territories for the night. The light faded, celebratory jubilee fireworks boomed and sparkled in the distance, the moon rose full and low in the clear sky. It was getting chillier still.

Ten o'clock is the magic hour at the moment and true to form the right hand bobbin dropped off and the braid peeled from the spool at five minutes to. Not for the first time my strike was fruitless. This has been the story of all my eel fishing over the years. I can get eels to take my baits, but connecting with them is a hit and miss affair. I recast hoping that the eel, or another, would return.

By ten thirty I was not only chilly, but also wishing I'd fetched a flask. Mist over the water on a moonlit night is the sort of image you see in fishing books as presaging a memorable catch. It's all lies. Cold and thirsty I packed up. Roll on the muggy evenings of high summer.