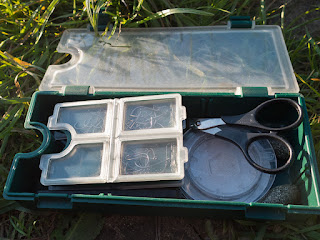 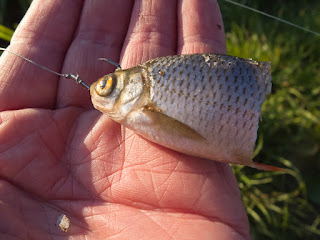 This week I've taken a couple of evening walks down by the canal, camera in hand, looking for bugs and stuff. With the hot weather the canal was looking great. Small fish aplenty topping on the calm surface. The water clarity was good enough to make out lily leaves beginning to form cabbage patches prior to heading for the surface. Not so clear as to be able to see fish swimming about. It all looked very inviting and my thoughts turned to eels.

I was going to buy a pint of maggots to enable me to catch some small fish for bait, but a rummage in the freezer found me enough tiny rudd to get me started for one short evening session.

Yesterday was as hot, if not hotter, than the preceding days. I got my gear together (which didn't take long as not much was required) during the afternoon, and with no rush to arrive, figuring the last hour of daylight would be when action would commence, I left home well after tea.

The stretch I had looked at earlier in the week was my first port of call. I was put off by the strong wind blowing along the canal, and the fact that the bank was in shade. I'd not bargained on being cold! Back in the car and off to a more open stretch where I knew the setting sun would be in my face. Sure enough it was a touch warmer there, although the wind was now off my back.

A swim was picked which gave access to weed free water in front of me with a sparse lily bed on the far bank. I had the rods set up, the hooks baited with half a rudd and cast out by eight o'clock. It would be half an hour or so before the sun would start to cast a shadow on my bank and action might begin. I cracked open the bottle of orange Lucozade and took a swig. 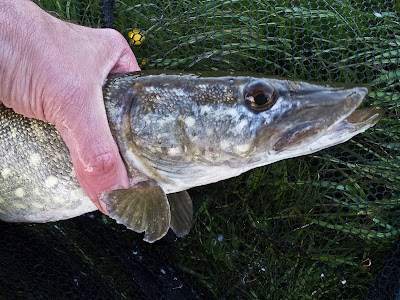 The sun was still high enough in the sky to make me squint when the right hand bobbin jumped up, stopped and jumped again. I struck and was convinced I was into an eel. Whatever it was seemed to be writhing and swimming backwards. A couple of tail splashes on the surface changed my mind. A small pike was soon in the net, unhooked and returned. I was glad I had opted for wire, even if it was of the ProLeader variety.

Not everyone who has tried this leader material has liked it. It's some sort of braided core with braided wire filaments encasing it. I have used it for pike fishing and landed fish with it. Sometimes it's only good for one fish, others it will be fine for two or three. I haven't had it cut through. It is more supple than wire, less prone to kinking, but more likely to tangle. It can be knotted with a Uni-knot or a knotless knot. I had a spool or two lying around and thought it might be useful for eel fishing - using it to make short hook links to attach to a longer mono leader to make a longer. two-piece, leader John Sidley style.

When the sun did sink from view it was time to put the fleece on and wish I'd brought a jacket to keep the wind from cutting through it.

A few fish topped and swirled. Sedge and reed warblers made their usual racket, a peewit cried mournfully behind me and a couple of oyster catchers had a row. As it got further in to dusk a lone bat circled high up. It was almost ten when the left hand bobbin sprang in to life. My strike connected with something that felt a little more eely than the pike had. It wasn't doing any splashing one the top. In the half-light it appeared to be 'balled up' in the way that small eels do when trying to lever themselves off the hook.

Something wasn't right though. Eels don't have feet. They don't make snapping noises either. When I got a good look at what was attached to the end of my line I put the landing net down and contemplated my next move. 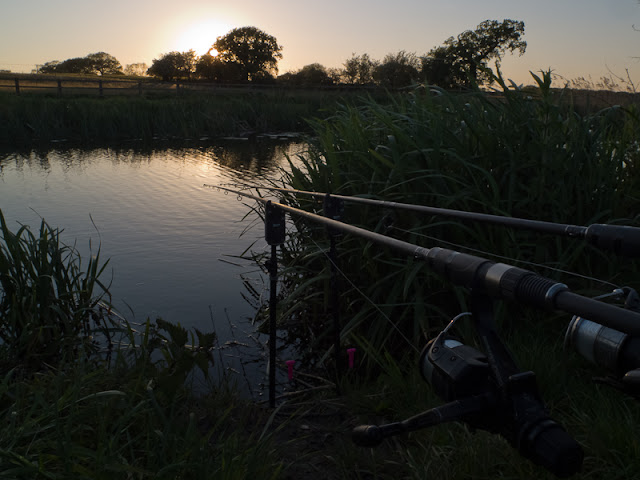 That move was to drop the rod as the right hand bobbin was on the rise. Either there was a shoal of turtles in the swim or an eel had arrived. As my strike met with nothing I'll never know.

I returned to the turtle and dragged it onto the bank, put a boot on its shell and pulled the hook free - keeping my fingers a safe distance from it's jaws. It was only the size of a large pie, but I was taking no chances! The hook was actually nicked in the skin of one of the turtle's forefeet and popped out easily enough. Once freed the horrible creature scuttled off trough the reeds and plopped into the water. 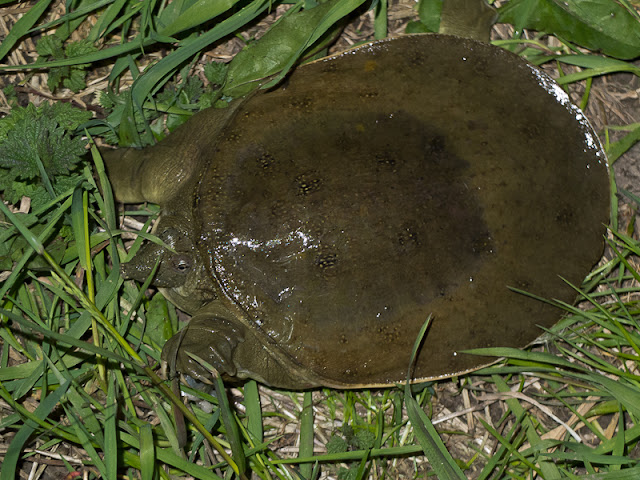 Although I rebaited the other rod and cast out again I'd had enough. The turtle hook needed replacing as it had opened out. I really should have made a few more wire traces up in advance.

Well sheltered from the wind, it was an overcoat warmer in the car park. If I could have found a fishing spot to keep out of the wind it would have been okay to fish on into dark. I don't know what it is about the canal, but it gives me the creeps a bit when night falls. The thought of tangling with a turtle by the light of a head torch doesn't fill me with enthusiasm to stop on another hour either!