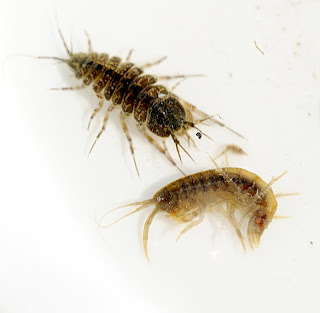 With this warm weather the pond is really coming to life. The tadpoles hatched a few days ago and are now exploring their temporary home. Plants are starting to grow - there are new shoots on the loosestrife and the broadleaved pondweed has fresh broad leaves appearing. Waterboatmen are active, and leeches have been swimming around.

I took some time out to sit by the pond and scoop around with a kiddy's fishing net tipping the captured creatures into an old white soup bowl. Many of them were tiny like the midge larvae, others were very active like the leeches. Not having fish in the pond means there are plenty of aquatic mini beasts.

There were quite a lot of the two critters in the photo, in various stages of growth. I knew there were freshwater louses in the pond and I thought I'd seen freshwater shrimps too. The pond dipping session proved they were indeed both present. The photo could be better, but they were pretty lively!

I also found out that there is a nice stinky layer of silt in the centre of the pond, just like you find in a 'real' pond. After eighteen months it is naturalising nicely.