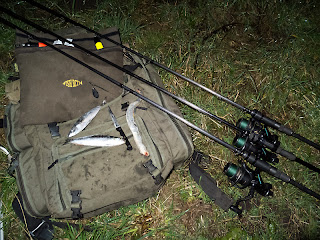 All manner of trials and tribulations have kept me away from the water this week. A week when temperatures rose and rain stayed away. I really wanted to get out on either Tuesday or Wednesday, but even Thursday proved to be out of the question. With the temperature set to drop again I reckoned that Friday might be worth a shout and dropped everything to make sure I wet a line.

Driving slowly along the rutted track in the dark there were moths being picked out by the headlamp beams. It was pleasantly warm, and the lack of wind made a welcome change after seemingly constant strong blasts this winter.

The fact that the drain was running through pretty fast came as a surprise. At least there didn't appear to be much in the way of surface debris drifting down. Even so I made sure all three baits were dropped in the near margin until it came light. When it did I got another surprise. The pumps had been switched off. One bait was quickly cast across the drain. 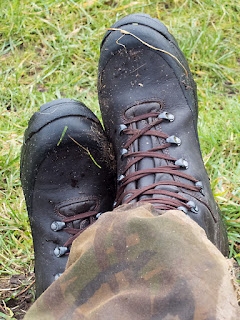 This was my first time fishing in the new boots. They aren't as comfy from the off as my last few pairs have been. I managed to get out for a couple of walks over the weekend to start the breaking in process. Although the grass was far from lush, it was damp with overnight rain, and it was a joy to spend the day with dry, and warm feet. Even if they were a little sore.

As the day brightened the dawn chorus became a battle of bird song. Wrens were making their racket, distant great tits were chinking, a robin was singing from a high hawthorn branch, and two dunnocks were staking out their territories in duelling banjo style - one on each side of the drain. The one behind me would sing its song round and stop, the dunnock opposite immediately responding. A cloud of midges danced over the ditch behind  where I was sitting. There'll be test match cricket in England before we know it.

The baits hadn't been out long when a Delkim sounded and a bobbin dropped just as I'd poured out my first cuppa of the day. As I got to my feet I saw a moorhen guiltily leaving the scene of its crime. I walked to the rod and double checked before resetting the bobbin. I sat back down and finished my drink.

Shortly after I saw something move out of the corner of my left eye. I looked round to see a stoat, maybe fifteen feet away, stood up like a cobra checking me out. After a couple of seconds it bounded across the bank and disappeared in the straggly grass. The area is well populated with rabbits, so no doubt the stoat makes a good living.

A growl from the sounder box made me look to the rods. The bobbin on the one in front of me fishing to the far side was twitching and the float was gone. Net in hand I crept low to the rod not quite making it before the bobbin dropped off. The slackened line caused the float to pop to the surface in the middle of the drain. I though the bait had been dropped so began to tighten to the rig. As I did so the float shot upstream and across. I wound faster and made contact. It was one of the smaller fish which scrapped well for its size, and despite the large growth that was pushing through the skin on its left flank. 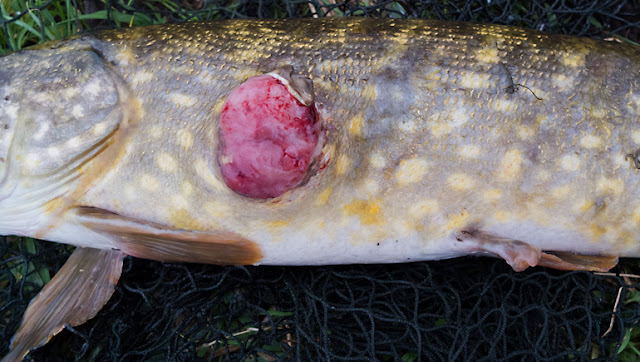 As the photo shows, the fish's left pelvic fin is disfigured. Not the prettiest fish by any means, but surviving, although possibly not for long.

It was still early and my hopes were fairly high. I must admit that when the drain is still I am happier to have a livebait swimming around. I think the pike are more active, at least in winter, when there is a flow on. It might also draw them up the scent trails from the deadbaits. Pure speculation, but confidence is a funny thing.

Still, it was a grand morning to be outdoors. Not too cold, not too hot, dry and windless. As the morning wore on that changed. A heavy mizzle came in from the west slowly obliterating the horizon. Then around noon the wind picked up. Luckily the mizzle didn't turn to rain, and it had cleared on the wind by the time I decided I'd had enough at two.

The season is drawing to a close and I want to get as much pike-time in as I can. But the river is starting to call me too. What's a poor boy to do?
Posted by Dave Lumb at 4:21 pm