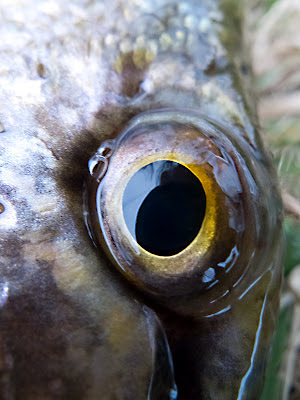 A warm dry day was in the offing and I was in two minds where to fish. In the end I took the line of closest resistance and hit the drain again. It was running off just the way I like it when I arrived and I soon had the two standby baits of lamprey and mackerel in the margins with the don't-know-why-I-bother sardine on the third rod.

Other people do well on sardines. I can remember just a couple of fish falling for them. In my list of useless baits they are neck and neck with smelts. Mind you my biggest deadbait-caught pike took a smelt. That's about it though! Still, I live in hope that a sardine will one day pull a similar rabbit out of the hat.

Today was not to be the day for the sardine surprise though. It was the lamprey head in the near margin that got picked up after an hour of daylight. The bobbin dropped off but the float wasn't moving when I stood up and grabbed the net. A sheepish dabchick dived  a few yards from the float leading me to think it might have caught the line. However, when I approached the rod the float twitched, then as I got to the rod the float shot off downstream. My strike met with the now too-familiar faint resistance, and a chubby jack of five or six pounds, lightly hooked in the scissors, was soon in the net. I should have checked which side it was lacking a pectoral as I caught  a similar sized one-pec pike earlier in the season.

Shortly after returning the fish and recasting the flow stopped. I'm becoming less and less confident of soaking deadbaits in the drain when there's no flow. I still made the effort to move the baits around and work my way upstream. It was a lovely day to be out once the sun began to shine and take the edge off the strong westerly that was blowing.

By three the flask was empty and my confidence almost shot. I'd worked up quite a sweat by the time I loaded my gear in the car and set off for home and a ponder over what to do next. Option one is go pike fish somewhere else. Option two is to do a spot of river fishing. Option three is have a break and wait for tenchtime!