In amongst the pinks

Plan A had been to get up dark and early for a morning session on the drain. Plan B had to be hatched - to get some maggots and go elsewhere on Sunday - when I remembered that I hadn't filled the petrol tank yesterday afternoon as I'd intended.

On the way home from the maggot shop, where I also picked up a pack of joey mackerel, I stopped by the drain to have a look. Given the rain that had fallen recently I was stunned to see the surface was still. No flow at all. Although there was rain in the air it was warm and I know I could be get home, sort the gear and have a bait in the water within an hour, giving me almost three hours fishing time.

I hate fishing in the rain, and never seem to fish well, so I surprised myself with the decision. What I did that was unusual was to throw the chest waders in the car. I reckoned that not only would the neoprenes keep the wind chill down, they'd keep the rain and damp from the grass off me better than a bib and brace or overtrousers. With a jacket on top I reasoned that I'd be able to stay out from under the brolly and fish well. And so it proved. 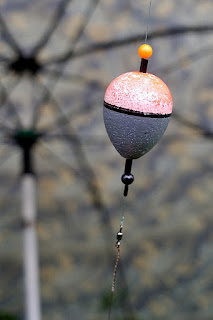 Being out on the mere at this time of year is something I really enjoy. There's a bleakness and solitude that makes me wonder what it must have been like before it was all drained, and the area was still covered by the largest lake in England. I'm sure that if the lake had never been drained it would now be filled with jet-skis and suchlike. So maybe it isn't such a bad thing the pumps were installed. The most noise I heard came from the huge flocks of pink-footed geese taking to the air every now and then when something disturbed them, and some distant reports from the guns on a pheasant shoot.

As usual my rigs were two simple float legers and a float paternoster. I'm quite taken with Fox Braid Stops as float stops at the moment. They seem to do what they are supposed to do. I like to put one below my floats as well as above for setting the depth. The lower stop prevents bottom end sliders from tangling with the trace, and it prevents any slider from sliding off the line if a trace needs changing. I don't like using a snap link as quick change trace links. They're just another thing to tangle in my experience. 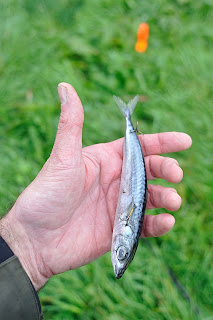 I'd walked upstream and spread the baits around the swim. Having only a couple or three hours of light I would be able to move a couple of times and cover some ground. With the rain showers blowing in on the strong westerly I set up the brolly to keep my gear dry and sat back to relax. I cast my mind back to my early days on the drain, and how I'd never had a run on a mackerel. Other seabaits had done reasonably well, herrings being a particular favourite of mine, but the mackerel had been a real dog. Even though I caught on it almost everywhere else.

It's all coming back to me how to position baits when moving swims. The one nearest the 'base camp' goes straight across, the next one goes across and down, the furthest bait goes by the near bank. This way I like to think all the baits are as far away as possible from any disturbance I might cause, while covering a fair amount of water. Sometime the second bait will be placed in the middle of the drain. 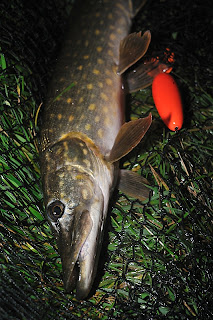 After my second move I could sense the light fading. I began to question the sense in making this trip. Afternoons never used to prove very productive on this drain, and last knocking were usually a great disappointment. The horizon had once more been hidden by an approaching rain squall. Time to pack up while there was light enough to see by.  I picked up the rod nearest the brolly, the sounder box in my top pocket giving out a couple of squeaks which became a rapid trill. That was odd, the line wasn't on the Delkim in front of me. I dropped the rod back in the alarm, grabbed the landing net and hastened to the third rod which had a bright red LED glowing beside it. Unbelieveable.  A run at dusk, to a headless joey mackerel! For the third trip in succession my strike met with little resistance. A pike's a pike, however, and this little one put up a good show for its size. By the time I had it unhooked and returned I was in need of the headtorch to finish packing up.

Making my way back to the car the squall arrived. Everything flung in the back and on my way home remembering some of the things I don't like about pike fishing - the smelly deadbaits, the early starts, the driving home in the dark at rush hour. I was also wondering what time to set the alarm for and where I might fish in the morning.