Blast from the past

Currently on my rebuild list are a pair of Armalites built by Chorley Anglers, by the looks of it before I started work there in 1990 or thereabouts. As can be seen here they've had some stick and are looking their age. Stripping them down one appears to have been whipped with silk varnished with polyeurathane and the other whipped in nylon varnished with epoxy. Which is strange. It's a minimal rebuild job, leaving the reel seat in place, fitting new fore and butt grips and new rings. The result might not be 'as new', but they'll look a lot better than they did before! 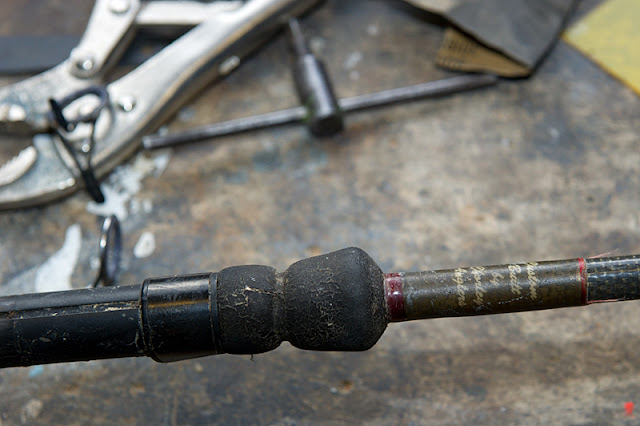 I didn't get taken on at Chorley Anglers as a rod builder, just a lowly part time shop assistant. But as I built my own rods, and Frank Thompson the owner approved of them, I started fitting a few handles - lathing down Duplon to make cone foregrips in the days before they were available off the peg. After a while I got let loose on the whipping and varnishing when it was taken in house. If it hadn't been for the start I got there I might be stuck with a nine-to-five job now!
Posted by Dave Lumb at 3:33 pm