When the bug bites

Another five thirty alarm call this morning saw me laying in a little, so I arrived at the drain just as the sun was rising. What made me head for this section, when in all the years I've fished this it I have yet to catch anything of note from it, I don't know. Perhaps I wanted to get it out of my system? Whatever the reason I walked as far as I could be bothered before setting up my three rods. At which point I realised I had put the wrong deadbaits in the cool bag... Manky sardines were there instead of perfect mackerel. Never mind.

The sky was clearing, with a distant misty haze obscuring the lower levels of the distant moors. There was a chill in the light southerly that was blowing insufficiently to ripple the water's surface. I wasn't brim full of confidence, I wasn't despondent. Just the way I like to feel when fishing. 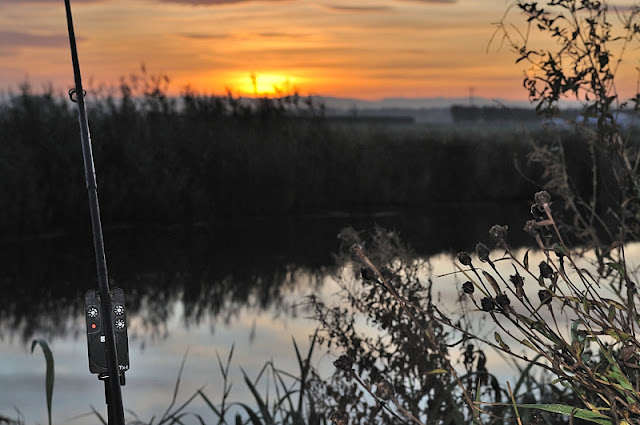 The rods were set up on the Delkims and my lovely new bobbins attached to the lines below the baitrunners. Everything looked 'well pukka'! 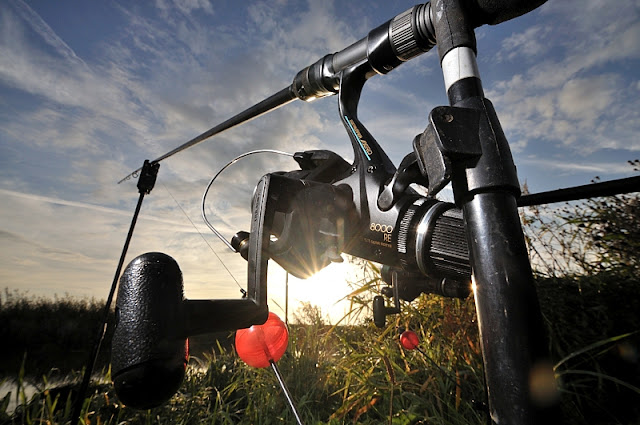 A sardine head was rigged on one of the float-legers, a lamprey tail on the other, both fishing the near margin. The float-paternoster was cast across the drain with a dead rudd mounted head-up the trace. Some people baulk at this presentation, but I don't find the pike care, nor do I have any trouble setting the hooks. The benefits are twofold. Firstly the hook hold is more secure than in a potentially soft tail rood - especially so on small baits, and casts can be made with less fear of the bait being cast off. Secondly, and of minor importance to me, the bait can be retrieved slowly almost as if it were being wobbled. 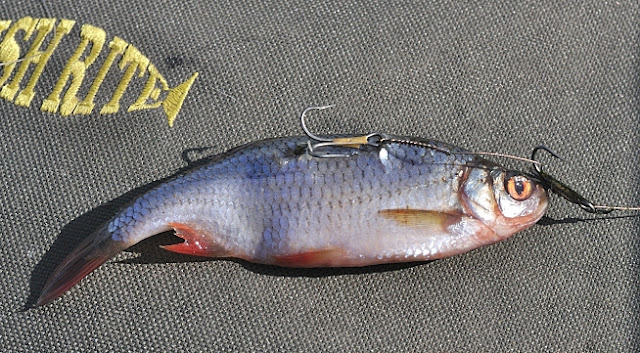 After three quarters of an hour I retrieved the sardine head for a recast. Or tried to. It had gone. I rarely use sardines. Other people swear by them but I find them more trouble than they are worth. I put a lamprey head on in its place.

A few recasts around the swim with the baits and it was time for a move at nine thirty. Hastened by my well used Nomad chair dumping me on the ground after making  a resounding crack as I sat in it. One of the side frames had split. The chair has been a stout servant but eventually given up the ghost. I must have jinxed it with my previous blog entry about not being able to do without a low chair!

The day was warming to the promised scorcher. The risen sun taking the chill out of the wind and making it balmy. In the second swim I half-heartedly tried to catch a livebait or two. There had been small fish topping when I moved in. They didn't want to play though. An hour and  a half later I moved again.This third swim had a few more visible features. One patch of reeds looked particularly promising to me. I dropped the paternostered rudd by it. The lamprey halves went across, and close in downstream.

By now it was getting warm enough to remove not only the fleece, but the sweatshirt as well. The wildlife had a strange mix of summer and winter about it. A lone chiffchaff briefly visited a small alder, a skein of pinkfoots flew inland, a few swallows passed over, flocks of goldfinch and longtailed tit were progressing along the banks feeding as they went. In the hot sun grasshoppers hopped in the grass. An English autumn often has a few days of Indian Summer to it.

I settled back to eat my final sandwich of the day and pour a brew. Hardly had I started on the tea when the sounder box made a couple of bleeps which turned into the trill of a run. The rudd had been taken. I'd like to report that my bobbins performed flawlessly. They certainly didn't perform badly. They actually didn't perform at all. I'd switched to fishing straight off slackened baitrunners in this swim. I'm not sure why. I just had. It worked well enough. My strike met with more solid resistance than it had on Sunday. The fish punched above its weight and I was surprised to net a jack of maybe three pounds. 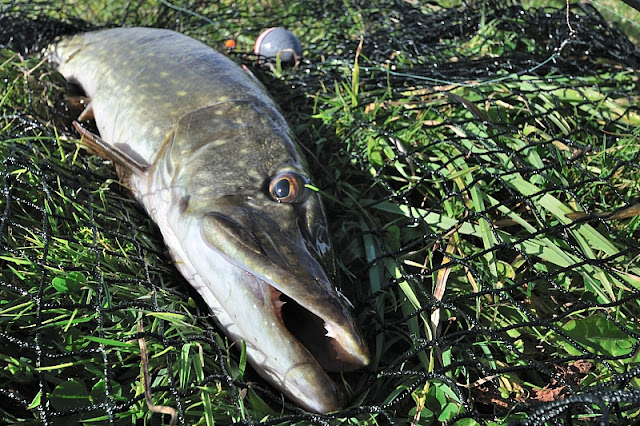 An hour and a half later, the flask emptied and the food consumed I was starting to nod off. I never could manage early starts well even in my youth. I don't know how some people manage to do before-work sessions on a regular basis. If I do a morning session the rest of the day is written off for me. I'm not sure how long this pike bug will last but I feel like having another session soon. Being the contrary fool I am, no doubt this phase will last until 'proper piking weather' arrives with the first frosts.
Posted by Dave Lumb at 9:51 pm