I'm not sure why, but I got the urge to go pike fishing. I fancied a relaxing morning by the drain, tucked away far from the madding crowds. Although the alarm was set for five thirty I awoke long before it sounded. Not through excitement, but because it was a warm night and I was roasting under the duvet. The flask was filled, a mug of tea drunk, two barm cakes buttered and honeyed, tackle and bait gathered and off I set.

The track from main road to drain bank has always seemed interminable. The slow journey along it being livened up by the sight of a barn owl crossing my path at speed, possibly disturbed by the approach of my car, and a couple of hares bounding away across the open fields.

In many ways the drain looked like it had when I first fished it almost thirty years ago, but there were subtle differences. Cattle are no longer grazed on the banks, the authorities lack the funds to carry out grass and weed cutting like they used to. Nature is encroaching. Mouths of ditches that join the main drain which once were clear enough to present baits in are now all but closed over by reeds. Much of the bank is also so overgrown with stands of reed and reedmace that swims have disappeared in places. Finding somewhere where the water was accessible to net fish was quite a problem any distance from the car park. But I managed to after a walk.

Given the state of the bankside vegetation I opted to fish just two of the three rods I had with me. One float legering a lamprey head to the far bank, the other float paternostering a dead rudd close in. Conditions felt good as I set up by the light of my head torch. The air was warm, the sky overcast, the drain still with a touch of colour. I was confident from the get go. 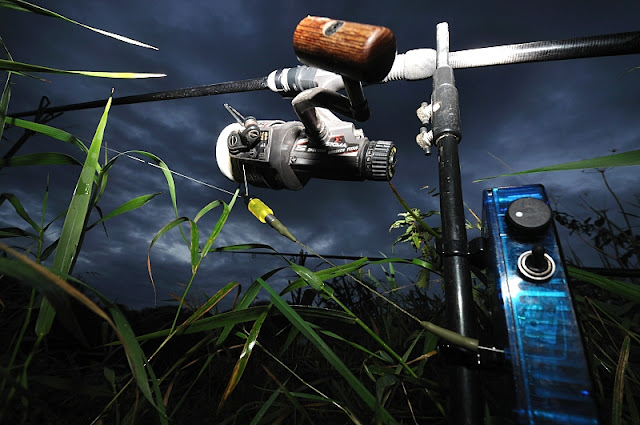 With the baits out it was time for a cup of flask tea. Reed buntings could be heard, unsurprisingly, in the reed beds, and as dawn came slowly along their calls were joined by the song of a robin in the willows behind me. The pink-footed geese have been coming back for the winter for a week or so now and throughout the morning odd straggly skeins of them flew in to the mere from the marshes. Around late morning there was a passage of swallows heading south. With leaves blowing from the trees autumn felt well on the way.

Either I had read the forecast wrong or it had been changed, because around eight thirty rain set in. Not heavy rain, but enough to make me wish the umbrella was in my quiver and not my garage. Luckily it eased off before I got depressed by it. The sun even tried to burn its way through the clouds. I'd had what I thought was a dropped run to the rudd, but the bait was unmarked and it's possible that some debris had pulled the line from the clip. The drain had been trickling off on a slow pump for a while. With the rain gone and the clouds thinning I moved downstream at nine. There were some fry dimpling just below a reed bed and it looked a spot worth a try.

It didn't take long before the home-made bottom end slider started to bob on the lamprey rod and slowly head upstream. That was definitely a run. When I connected the fish came easily. It wasn't exactly large. If it had another good meal it might have made three pounds. My first pike by design for some time, nonetheless. It certainly wasn't worth setting the camera up for a self-take! I made do with a close up of its eye. 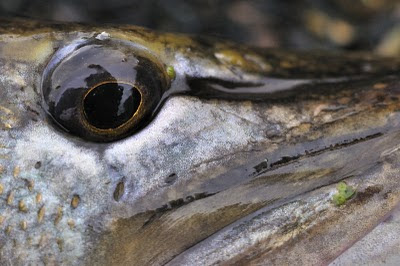 The day couldn't make its mind up whether to be hot and sunny or just warm and cloudy. I was able to remove my fleece though, and after doing so I made another move. This time to a spot that hadn't changed much over the years. There must be something in the make-up of the land there that has prevented reeds colonising the margin. Years ago it had produced a pike or two for me, but not this time.

I'd set my departure time for noon, so that was when I started to pack everything away. Just as well really, because the flask was now empty and the barm cakes long since eaten. 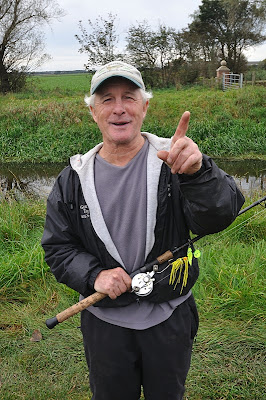 Making my way back to the car I saw a familiarly hyperactive figure on the other side of the drain. Sure enough it was Gord, who was surprised to see me. Like a lot of people he thought I had given up piking for good! Well I might have given up full time piking, but a dabble now and then isn't too bad.

In fact this session has almost got me enthused enough to do it again soon. I might just sort the drain gear out and grab a few morning sessions before winter's icy grip takes hold. I really do hope it doesn't take hold like last winter, though. One week of ice and snow is more than enough!

After being delayed in my return for lunch by the effervescent Mr. Burton - who did his best to catch one for the camera - I eventually made it home before hunger made me weak.

Unless a blank order turns up early next week I'll have a couple of days free for fishing before having to sort my stuff out for the PAC Convention at Kettering. Looking back I think I first had a stand at the then PAC Conference (at Loughborough) back in 1991 to launch D.L. Specialist Tackle. No wonder I feel old! See you there.