These last two weeks or so I've been in enforced idleness, and I still am - waiting for cork to materialise from somewhere overseas. It's been a case of promises, promises. Mostly I've been occupying my time with the camera, but after two consecutive afternoons on a windswept beach shooting thrill seeking kite boarders I needed a day of rest. 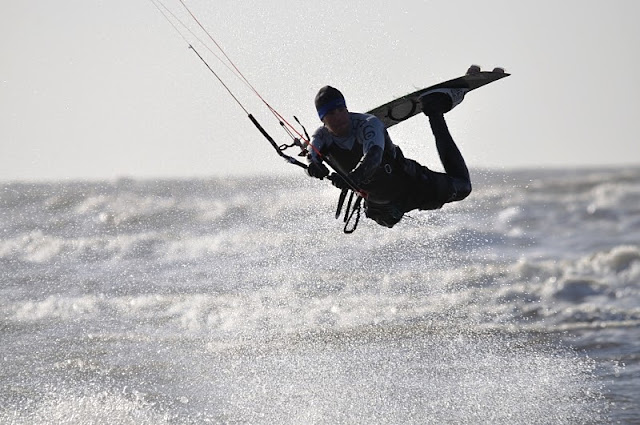 The idea of some chub fishing was appealing. More so after a pre-lunch call from a friend who had caught a couple of clonkers a few days earlier. A quick check of the river level on the internet and it was a hasty snack followed by a hectic gathering of tackle and bait. With the car loaded I headed away from the river to buy a pint of red maggots with a sprinkling of whites followed by a U-turn to the motorway.

The morning had seen a frost lightly covering the lawn but by the time I arrived at the river the day felt warmer than it was. The strong wind that had the kiters out in force over the weekend had subsided and birdsong could be heard coming from the woods over the river. There was one white van parked up and it  was no surprise to me to see who the owner was, making a brew in the back of it. As he headed back to the river I loaded myself up and followed.

The idea of a social session, fishing close to Eric appealed, but the big crease was a stronger draw. After all, I'd come to catch fish. The water temp was a shade over 5C so my hopes of a barbel on the boilie rod were low. It was cast out slightly downstream and left to fish for itself.

The chub rod was fishing the same rig I'd last used on the river, down to the size 16 hook. The colour was dropping out of the river as the level continued to fall and I reasoned a fine approach might be best for a bite or two. When rummaging in the freezer for my ancient ball of cheese paste I found two carrier bags of what I hoped were liquidised bread and crushed pellets. It turned out one was pellet and hemp mush, which I didn't want, and the other was crushed halibut pellets, which would have to do. Some of the lumps were too big to pass through the holes in the feeder, so not ideal, but they'd still give off a flavour/scent trail. The 30g feeder was heavy enough to hold and was half filled with the crushed pellets before being topped up with maggots.

Within a quarter of an hour of starting out the frequent recasting started to work and a few tentative taps registered on the quiver tip. From previous experience I have found that when double maggot produces enquiries a single maggot can produce bites. And so it proved. The first blank saving fish of the day was a brownie of half a pound or so that came along after an hour and a  quarter. I had had one really positive bite before hand that had smashed my light hooklink and after which the bites dried up. Possibly a barbel, perhaps a decent chub, maybe even an energetic trout.

Around three quarters of an hour later, at twenty-five past four, still in broad daylight now that spring is approaching rapidly, while talking to Eric who had come up for a chat, I lifted into another positive bite and felt something a bit heavier on the end. It wasn't powering away as a barbel would have done, nor was it charging about like a stupid trout. I'd hooked what I'd come for. Once on the shallows I got a glimpse of the fish and it looked quite small, three pounds or less. It wasn't until I lifted the net that I realised why it had taken so long to get in. A stocky and scale perfect chub that surprised us both by spinning the needle to 4lb 13oz. Not a monster, but my biggest fish of the year so far! Eric obliged with the camera, and I even cracked a smile - of sorts! 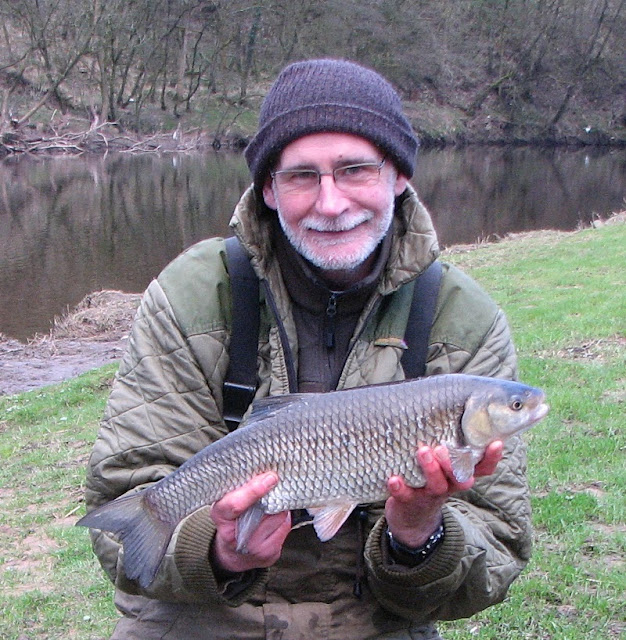 Half an hour after the chub a sea trout came along, of a similar size to it's brown cousin I had caught earlier. It's that time of year when the river sees the salmon trying to make their way back to the sea. I guess some manage it, but the majority we notice are in a sorry state. If not already dead they are gasping fungus clad specimens clearly destined to become carrion. As one creature dies so others are born. Such is nature's way. Lambs bleating upstream and the constant chinking and trilling of birds in the wood a sure sign the cycle continues.
The sky was cloudy but bright for most of the afternoon, clearing briefly towards sunset when the tops of the far bank trees glowed warmly in the light, the trunks in contrasting shade. 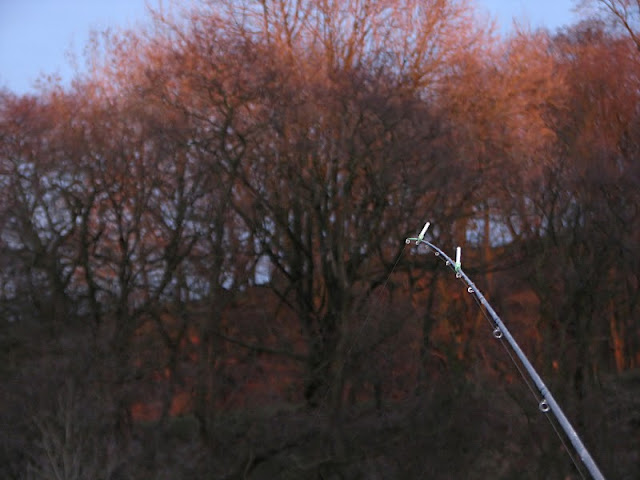 The ruddy glow picked out a stone barn on the other side of the river and I couldn't resist taking a few shots with my fishing camera. I wished I'd packed the DSLR when I reviewed the photos at home, they don't come close to doing the views justice. 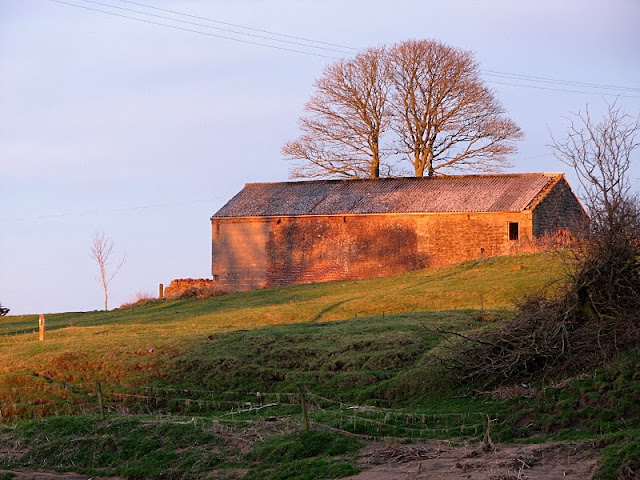 In the fading light the tip sprang back once more and after playing the fish gently, as I couldn't remember how strong (or weak) my hooklink was, I landed another chub. A rather tatty-tailed and missing-scaled fish of four pounds-six which I returned without a photograph. It was then I wondered if I should have taken my keepnet along.  Unlike barbel, which can return to a shoal without ill effect on sport, a returning chub appears to spook the rest of the fish in the swim. I always take the keepnet when after roach or dace for the same reason.

My original intention had been to fish until six thirty to avoid teh rush hour traffic on my way home, but when 'Just a Minute' came on the radio I decided to stick it for anther forty-five minutes until 'The Archers' ended. They proved to be forty-five biteless minutes. It was a surprise that I didn't start feeling cold once the light had gone. The air temperature had dropped some four degrees from my arrival, yet it felt quite pleasant. I guess two days in a biting wind must have hardened me up!

Even so it was nice to pack the gear away and head for home. I'd gone a long time with just a flask of tea and one Nutrigrain bar. I needed refueling.

This session drove home to me how much more enjoyable it is to do something when you really want to do it, with nothing to prove, than to do it because you think you should or because you are trying to hit a target. There was no pressure on me, self-imposed or otherwise, to catch anything. No feeling that I had to be there doing what I was doing. I was fishing for chub because I felt like fishing for chub. And it was fun. So much so that I might be going back today as the sun is shining as I write this. Unfortunately my back is aching like mad. Carrying even a light load a short distance and then sitting in a low chair for a few hours doesn't sound like fun today. That's growing old for you. I hope that cork arrives so I can do some work for a rest.