It being the penultimate Sunday of the river season, a warm and sunny one at that, I expected the river to be busy. It was. With just enough room for one car in the car park I was still hopeful of getting the swim I fancied, as it's not a popular one. Sure enough the anglers fishing were grouped in the expected places and the run below the rapids was free. With the sky as clear as the river I reckoned the deeper water, particularly out by the crease, might be worth a chuck. Not expecting much action until the sun began to drop I left my gear and had a wander. Talking to two anglers who had both just returned their first fish of the day, it was two in the afternoon and they'd arrived around nine in the morning, it seemed like the light needed to fade before the fish would feed well. I wandered back to my swim and took my time setting up. There was no rush. 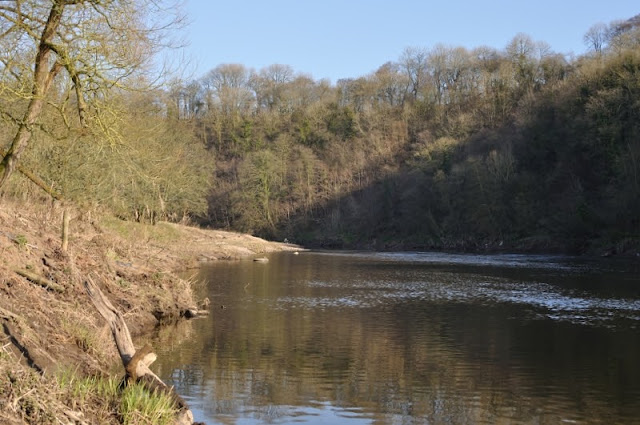 It's always a pity the river season doesn't last another fortnight. The weather so often starts to turn pleasantly warm around late February and into March. This was one of those days when the bunny suit wasn't really required until later in the day. There was little wind to take the edge off the sun's warmth. By the time I had all my gear arranged round my chair and two baits in the water I was ready for a cup of flask tea.

Despite a mid-week frost and the river having dropped and cleared it had risen in temperature to just shy of 7c. This time out I left the barbel rods and boilies at home. Perhaps I shouldn't have done given the conditions?  Then again I wanted to catch chub, not barbel and to try one of my 1.75lb Torrixes as a chub rod. I had rigged it up to fish a lump of three-year-old cheese paste on a size six hook to a 3lb 6oz Reflo Powerline hooklength. The rig was the same helicopter rig I use for the maggot feeder, but I chose to fish it with a straight lead and let the paste do the attracting. It certainly stank well enough! The other rod fished the same as last time out, a single red maggot on a 16. But this time I had some hemp and pellets to add to the maggots in the feeder. 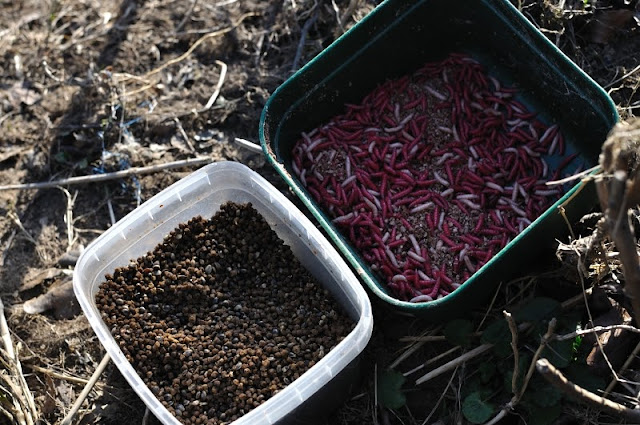 It took a while for bites to materialise. A couple of hours in fact. During the quiet spell I was surprised to see some small fish in the margins. The minnows don't usually show up at this time of year, and looking at the size of some of the fish they hadn't long hatched. What they were I don't know. They did seem to prefer the maggots I threw to them over the pellets and hemp though. Perhaps they were trout fry?

A bigger surprise was that the first proper bite, I'd had a few plucks to the maggot, was to the paste. The rod tip bounced continuously and I lifted into a decent feeling fish that woke up half way in. So much for waiting for the light to go. I'd had the choice of fishing to the right of a bush with a nice clean margin of sloping sand, or to its left with a jumble of sunken branches at my feet. Like a fool I chose the latter, so as I dropped my landing net in the edge it drifted with the eddy straight into the wood and got tangled. I managed to keep a tight line to the fish and free the net. But it was touch and go.

The Torrix did its job well, although I think it would be even better if it was a tad lighter in test curve, and maybe a little softer in the butt. Even so I never felt like the hooklength was in danger or parting.

Safely netted it was time to unhook the chub. At first glance I saw my hooklength had snapped. Closer inspection revealed that the broken line was considerably thicker than what I'd been using, and my hooklength hadn't parted at all. How a chub of four and a half pounds had bust off someone fishing with what looked like ten pound mono I don't know. The hook was deep but easily retrieved and had the remains of two white maggots on it. It was also a fairly heavy gauge hook that had partially opened out. Maybe the chub had picked up a snagged rig?

Having forgotten my keepnet last time out I was better prepared, so the chub was slipped safely into the net read to be joined by a host of it's shoalmates.

Next cast in the maggot rod signalled a positive bite. A wriggling, writhing fish suggested a trout, but no. It was a small grayling which I returned immediately. A repeat performance ten minutes later the maggot rod was in action again, this time it was a trout, and another followed another ten minutes after. That was the biggest trout of the day. And as it turned out the final fish too. 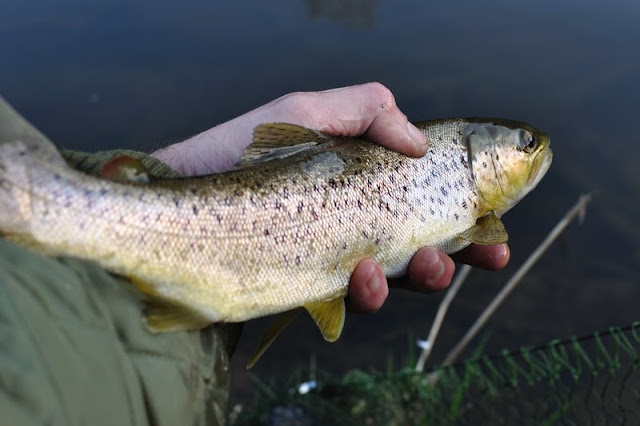 I continued to get plucks to the maggot rod as the light faded, but nothing positive save for one that broke the hooklink. The paste rod was also in action, but again nothing that I managed to connect with. I think I should have cast it further upstream after dark to improve the chances of fish hooking themselves. I had neglected to fit the rod with an isotope so seeing the bites was a bit of a problem. A problem touch legering would have solved I suppose.

Having become spoiled by the quality of photos that my DSLR produces compared to my flip-screen camera I used this opportunity to try the DSLR for a self-take or two. I had made a device to allow me to operate my radio remote release with a knee or foot and it had worked fine in the house. On the bank it didn't work at all! I was, therefore, reduced to holding it in my right hand while holding the fish. Which actually worked quite well. A bracket adaptor to take a bulb release like I have for my smaller camera would work better though, and not depend on batteries to function. Framing is a a bit troublesome without a flip-screen, but not insurmountable. I managed well enough with my previous fishing camera, and the larger sensor of the DSLR allows cropping while maintaining better image quality than my flip-screen camera at full frame. Out of four shots one was pretty good. With more practice, and shifting the camera off auto, I'll get better results. 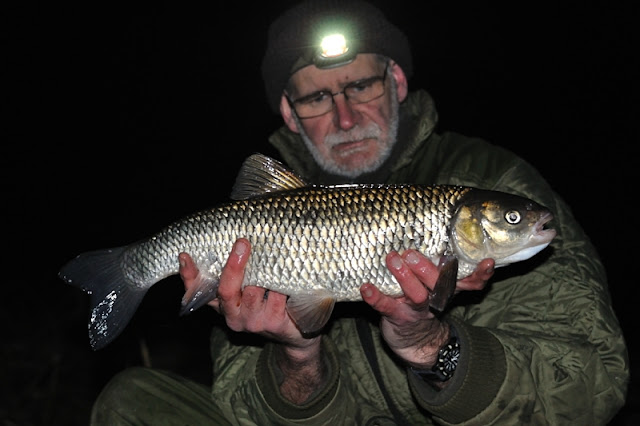