On the night shift

What little rain there had been wouldn't have made much impact on the Ribble. Apart from the fact it hadn't lasted too long and the river rises and falls quickly, the ground will be so dry most of the rain will get soaked into the earth like a huge sponge. Even so I was itching to catch a barbel. So much so that I set off earlier than planned, which meant I spent about an hour longer twiddling my thumbs waiting for dusk than I need have done. This wasn't all bad as it gave me time to remember what a special place the valley is.

I had been surprised to find one vehicle parked up when I arrived. Judging from the personalised numberplate on the fancy looking 4x4 I was expecting a game angler to be on the bank. It turned out to be two guys float fishing with two cheap looking telescopic rods. It seems strange to me that people who aren't short of a bob or two and obviously like nice things, judging by their motor, fish with cheap and nasty tackle. Not that cheap and nasty gear stops you catching, but quality gear does two things; provides an aesthetic pleasure to the practical aspects of angling, and means you can't blame your tackle for your failures!

Last season's favoured peg looked well trampled. There was a strong wind blowing up river and I'd left my brolly at home. The air was warm, but the wind still had a cooling effect so I set up a little upstream where I could get tucked down the bank and get some shelter. In a normal year the balsam would have been towering over me in this spot, but this year it's well behind everywhere I have seen it.

The rods were still rigged up from teh final day of last season. I did replace the baits before casting out though! One rod fished two 14mm boilies downstream and the other one an 11mm S-Pellet upstream - both with the ubiquitous PVA mesh bag of mixed pellets and Hemp and Hali Crush. The H+H Crush was added to the bucket by mistake, but it seems to stay in the bags well enough.

Despite the broken cloud cover, which congealed after dark, darkness was slow coming. The isotopes didn't start to glow until well after 10.45pm. Just before ten the downstream rod had rattled in the rests leading me to expect an eel. The wriggling creature on the end of the line reinforced that suspicion. However it turned out to be a chub of a couple of pounds. I hadn't blanked and the river season was under way.

The wind eased, as it so often does, as the light faded meaning that the air temperature stayed up, more so as there wasn't a star to be seen through the clouds. No need for the bunnysuit, which was just as well because I hadn't packed it.

At eleven thirty the downstream rod was in action again. This time I was alerted to the take by the sound of a Baitrunner and the sight of the spool spinning as the rod bowed over. The fish pulled well for its weight. Not quite seven pounds it was a fine example of the attraction of barbel fishing. Feisty fish that are easy to catch! I hadn't been too happy with two 14mm boilies on that rig, the gap between bait and hook wasn't long enough for my liking - even though the chub had been nicely hooked. I was now using one 14mm and one 10mm boilie which looked better to me. I'd also added a second pellet to the other rig for the opposite reason - the gap looked a touch too long.

It wasn't quite an hour later when the same rod was off again. A similar sized fish which fought equally as well as the first. Should I stop out until dawn and see how many more would turn up? I only had a flask with me. Some grub would have been a good idea to get me through the short summer night. The next take looked like it could have been caused by an eel. A slack liner that did no more than remove the tension from the braid. Sure enough it was an eel. Bah. 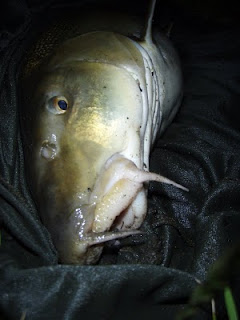 Second of the season
The upstream rod bent over more determinedly as the spool spun fifteen minutes after the eel had disturbed it. This was no eel, and it felt more powerful than the other two barbel had. It proved to be an ounce shy of nine pounds, I was weighing the fish to get me back in the swing of guessing their weights after a long time without seeing a barbel. I slid the fish back and it did the lying motionless in the shallows trick. 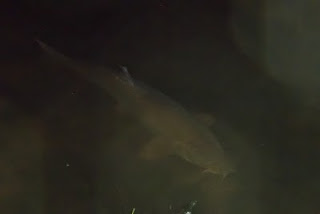 Resting
I kept an eye on it as I rebaited and recast, and afterwards, to make sure it was okay. Until the time I looked and it had gone. There was no flow to speak of in the edge, so it hadn't rolled over and been washed away. It had simply recovered its composure and sidled off.

One o'clock came and went, as did two. It seemed pointless leaving then, I might as well stick around and wait to watch the sun rise over the fells. As it turned out there wasn't a sunrise as such. Light slowly came to the sky, starting with vague hints around three when pale objects like the sleeping swans appeared a little more visible. The sky was still cloudy and the morning twilight lasted for about an hour before the head-torch was redundant. During this period, before the dawn chorus began but after oystercatchers and curlew had called, the upstream rod had twitched. Not a full-blooded take, the bait had been thrown well upstream, but a slack liner of sorts. This was another eight pounder, and another good puller. Unlike it's predecessor it powered off on release.

By four, in dull morning light, I called it a night and set off for bed. The drive home saw me pass the usual crows and magpies cleaning up the night's road-kill. The highlight of the journey being a tawny owl perched round shouldered on a high street lamp. It looks like the pellet bucket and low chair are back in residence in the back of the car.