I've always taken the view that if you don't feel like doing something you shouldn't do it just because you think you ought to. Which is why the tench fishing hasn't been as intense this spring as in previous years. My few sessions have been gruellers which haven't even felt like I was in with a chance. So the photography has been more appealing. Last weekend something changed. The forecast was for settled dry weather and my long lens was out of commission. That alone shouldn't have made me need to get the tench rods out. It must have been something else.

Monday came around and I prevaricated. Tuesday was different. With the decks cleared by late afternoon I gobbled down an early tea and hastily packed the car hoping I had enough food and bait to see me through. The session would be open-ended. When food, bait or water ran out I'd come home! Lunch time on Friday was the latest I could realistically fish until as I wanted to call in at the Harrison factory on my way home.

I still left it a bit late to set off, but with the summer solstice closing in there'd be plenty of light to find a swim and get settled in. Finding just a couple of anglers on 30 or 40 acres gave me too much swim choice. Plan A had been to move if nothing showed up, so I picked the swim I'd blanked in last time.

Tucked up in bed by ten thirty, I'd been up early with the camera and was dog tired, the left hand Delkim disturbed me after fifteen minutes as a little line was taken, the bobbin hitting the deck by the time I had my boots on. A 10mm Tutti Frutti pop-up had been taken. The new-tackle-jinx was broken!

From the way the fish was behaving I wasn't sure what I was connected to. It being dark, and me not having my specs on, I couldn't tell for sure even when it came into the beam from my Petzl. I thought it was a deep bodied tench, but a bream slid into the net. Out of practice at the guessing game I thought it might be a double, but it was almost two pounds shy. A clean, bronze, chubby fish and a welcome start. 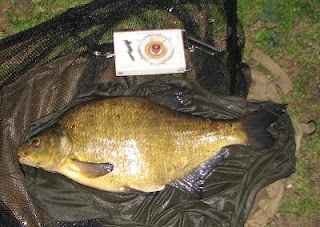 I woke before the alarm, made a brew and listened to the distant, incessant, chattering of sedge warblers mingling with the rest of the dawn chorus - still loud and varied for early summer. I spodded out some more seed mix (hemp, groats and corn) and swapped the boilie for two grains of plastic corn. This rig was cast a way out to the spod line, as was an in-line maggot feeder. A second feeder went closer in to my right, just within catapult range where I sprinkled some seeds and some red maggots. As usual the feeder rigs were baited with two hair-rigged plastic casters. Someone on an internet forum had suggested the reason for my lack of tench so far was my plastic baits, and that live maggots work much better. I almost believed them, but my motto is "if your rigs worked in the past, the reason you are blanking is a lack of fish in the swim". I stuck with the plastic.

A clear sky heralded a hot and sunny day. Most of it was spent watching the birdlife in the bushes around me and over the lake or sleeping. Mallards visited me, the friendly female from last year still bold and nosey. Tufties visited my baits. No fish showed either on the surface or on my hooks. There wasn't much recasting done. Around tea time I did some more baiting up, changing distant feeder to a helicopter rig and a 15mm Tutti for the night.

I was hoping the bream might show up again after dark and settle on the bait. It didn't happen. Only two other bream have come my way on this pit. Both in the middle of hot, bright sunny days, and completely out of the blue. I've yet to see a bream roll or land more than one in a session. In fact that bream on the first night is the only fish I have taken at night, from my only nocturnal bite. Most odd.

The second dawn was a repeat of the first. Almost. This time I saw some oily swirls that weren't caused by fowl. What they were caused by was hard to say. No fins broke the surface. They could have been carp. Yeuk! After a light baiting the boilie was swapped back to a feeder and caster set-up.

It was at ten to seven that I was disturbed by the unexpected sound of a Delkim, and the unusual sight (this spring) of a rod tip pulling round. The fish was covered in weed, bright pale green soft weed, of which there was little to be found, and as a result didn't scrap much until the weed dropped free. A tench at last! One of the smallest I've had from the pit but one of the most welcome at a few ounces over five pounds. As immaculate as most of her sorority in the lake. While playing this fish there was another oily swirl a few yards out. A good sign in my book. Sure enough, thirty five minutes later it happened again. This time the fish was a bit bigger. Great stuff. The rest of the day was spent nature watching. Again! 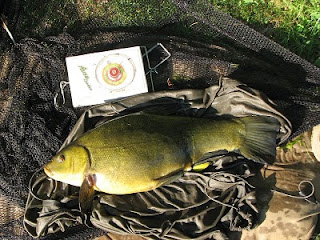 First 'proper' tench of the year

By the time I had finished off my evening meal of a tin of beans and sausage, washed down with a mug of tea, I was starting to consider my next move. The maggots were turning rapidly, and dwindling after the baiting up and feeder filling. I should have bought three pints instead of two. Should I call it quits and pack up at dark, or give it one more night and morning? Around eight I reached for the stove to make a brew and found the gas bottle surprisingly light. I shook it and it was worryingly quiet. It didn't seem to me like I'd get a cup of tea and a bacon sarnie out of what was left. Home looked a good bet. Yet something made me stay. I had plenty of water left, half a bottle of pop for variety, and four slices of bread. I could drink water and pop and save two slices for a late breakfast bacon butty, eating the other two slices of bread if I got peckish. I might just struggle on until lunch time. The best way to overcome hunger is to sleep. I put a boilie out again for the night and hit the hay.

Friday morning dawned overcast. This meant it felt warmer than the previous two dawns. In fact it was quite muggy. The lake was flat calm. There were more of the oily, finless swirls. Some almost over my close in baited patch. There wasn't much left in the seed bucket, so I eked it out with three or four spods to the far off spot where the plastic corn was recast. Seeing the swirls I decided to drop the distant feeder on the same line as the right hand one - but straight in front of the rod pod. This spot then received a sprinkling of seeds and maggots/casters as did the right hand spot. I then went back to bed in order to put breakfast back as far as I could.

Breakfast time was just after seven. The gas died just as the bacon fat started to crisp. Two rashers between the last two slices of bread was the most welcome butty I can remember in a long time! An hour later the plastic casters on the rig straight out were picked up by a tench that came in easy, belying its size. Not a monster, but a seven pounder ought to pull a bit harder than that one did. I recast both feeder rods, sprayed out more feed, and had a repeat performance twenty minutes later from a fish two pounds lighter that fought like a demon!

And so the morning progressed. At almost half hourly intervals one of the feeder rods would be in action. So much for plastic casters cutting down my catches! By five past eleven I'd netted eight perfectly proportioned tench. The biggest female going 7lb 13oz, the lone male (a really hard scrapper) 6lb 14oz. At ten past eleven the rod fishing the feeder straight out was off again. As I made for the rod the daft mallards which were by the rods took flight, and as I pulled into the hard running fish the female landed in the line of my right hand rod. Distracted by the now entangled duck I felt the line go slack and the fish was gone. At this point the duck also came free and I cursed her loudly. 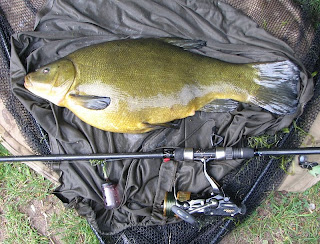 Still a little bit of room to fill out some more

The maggots were sparse in the bucket, my stomach was rumbling, the sky was darkening almost imperceptibly. Another hour without a take and I'd break camp and seek sustenance. The next hour was indeed fishless. I pushed my laden barrow back to the car I thinking to myself how it had been worth stopping that extra night rather than taking the easy option. Then I swilled more water, loaded up the Astra and pointed the bonnet at a chippy. As I pulled up outside the fried fish emporium I felt spots of rain. By the time I was parked in a lay-by eating the fish and chips it was raining that warm summer rain that doesn't seem to soak.

Not only had I broken the new tackle jinx I'd got to give the 1.75lb Torrixes and the Baitrunner Ds a good test. The only worry I'd had about the reels was the small ant-reverse lever, but in practice I had no trouble flicking it off to allow me to backwind. They're nice and smooth for that. Initially I was concerned that the butts of the Torrixes were a little too stiff. The rods certainly didn't seem to bend as deeply as the Interceptors. However, when I hooked the runaway male and had to apply full sidestrain to get it out from under the bankside willows I had no trouble at all. I think I might get to really like these rods. They certainly make much nicer tench rods than the 2lb version I used a few years back. When I called at Harrison's on my way home I discovered there is a softer butt available. It's a temptation. If it proves a touch too soft for tench it might make the rods spot on for long range roach fishing. 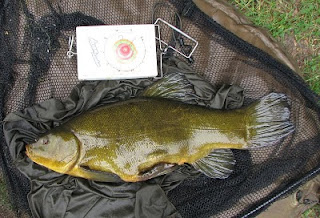