Back in July 2007 I took a picture of a damselfly eating another insect. It wasn't a great shot. yesterday Mark Houghton blogged a picture of a banded demoiselle - the same speices of damsel. As I knew there were plenty to be found along a stream near the dragonfly pond I nipped out after boxing off what work I had to do by lunch time.

The lure of the pond was hard to resist and I took up the challenge of shooting a dragonfly on the wing. I left defeated - for now. It's a task that requires a concerted effort. On reaching the stream I was wondering where to start my search for the iridescent beasts when two males flew up before me. Starting the theme for the afternoon they steadfastly refused to settle anywhere where they were unobscured, or if they did they were at an inconvenient angle. Rather than hang around waiting for a good opportunity I went in search of more demoiselles.

Although country parks and local nature reserves are a public amenity, and often habituated by errant canines and children, they do have the advantage over more 'serious' nature reserves in that you can wander off the hard paths and are not restricted to looking at the wildlife through hide windows. So it was that I followed a lightly trampled path along the stream's grassy bank.

More damsels flew up and I soon learned to tread more carefully. In some spots there were many damsels to be seen. One was sure to land and pose nicely. It didn't. I managed a few half decent pics, but in most the damsels were partly out of focus because of the angle of their bodies, or there was a leaf partially hiding them. The sun had also disappeared, although the light was still good. Not that that mattered as I was shooting using flash. After a brief bee interlude I wended my way back along the stream. 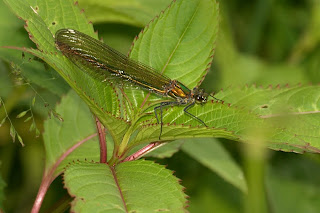 Female banded demoiselle
On reaching the bridge where the path back to the car leaves the stream I took one last look at the spot I'd started in, but from the opposite bank. Two male banded demoiselles appeared and one landed in a perfect pose. I took a few shots from afar then moved in closer. It stayed put and I was able to get in as close as the lens would allow. Knowing I had at least one good shot I bid the poser a fond farewell and called it a day after a last look at the pond. The chippy beckoned. 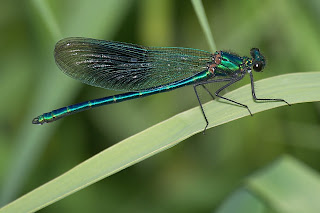